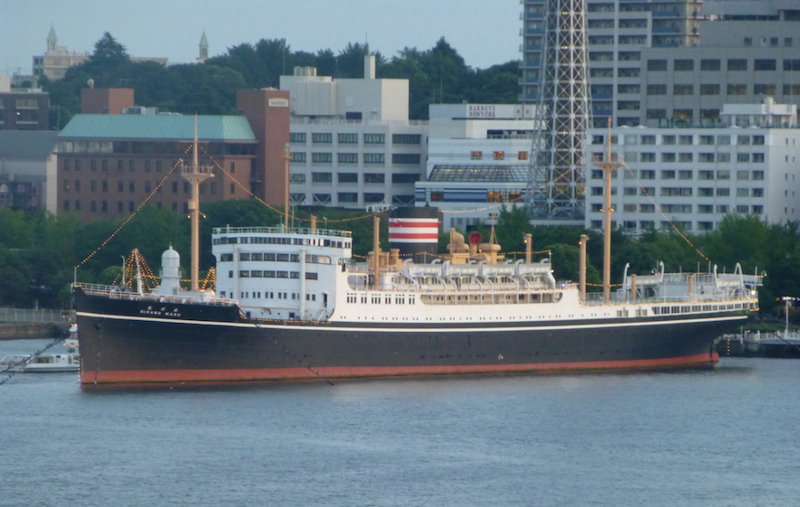 Hikawa Maru was built for passenger service on the Japan-Seattle Line, on which she made regular sailings until just before the outbreak of the Pacific War. She had two sister ships: the Hiye Maru and the Heian Maru. Distinguished passengers carried by the Hikawa Maru included Japanese Prince and Princess Takamatsu and Charlie Chaplin.

As war clouds gathered, Hikawa Maru was requisitioned by the government and sent to Vancouver and Seattle to evacuate Japanese nationals from the United States. She returned to her home port of Yokohama on 18 November 1941. She was then fitted as a Navy hospital ship. During the war, she struck mines on three separate occasions but suffered only minor damage, and survived as Japan's only large passenger liner to avoid being sunk during the war.

After the war, she continued in service as a hospital ship, and was used to repatriate Japanese servicemen. In 1947, she was refitted as a cargo-passenger ship and put into regular service on domestic routes. Next, she was used as a tramp ship on international routes, and in August 1951, she was again placed in regular service on the Seattle, New York, and Europe Lines.

After a further remodeling in 1953, she resumed service on the Seattle Line as Japan’s only transpacific passenger liner, with a capacity of 276 passengers accommodated in 82 cabins.

In October 1960, having been in service for 30 years, Hikawa Maru returned from Seattle and Vancouver to Kobe, and finally to Yokohama, where she was moored and retired from service. During her lifetime, she made 254 Pacific crossings and carried a total of more than 25,000 passengers.

Since her retirement, she has been kept at her moorings in Yokohama port, where she is open to the public. She has become a familiar sight to many local people, and was designated as a nationally Important Cultural Property in 2016.