PARTICULARS OF THE LOSS OF THE STEAMBOAT PULASKI in 1838 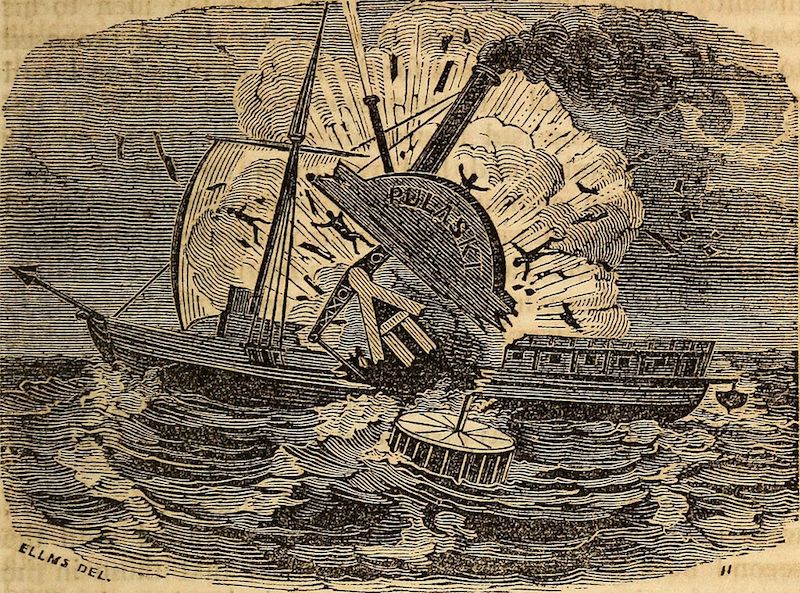 Loss of the steam packet PULASKI, with a crew of thirty seven, and one hundred and fifty or one hundred and sixty passengers. On Thursday, the 14th instant, the Steamboat PULASKI, Capt. DUBOIS, left Charleston for Baltimore with about 150 passengers, of whom about 50 were ladies.

About 11 o'clock in the night, while off North Carolina coast, say 30 miles from land, weather moderate and night dark, the starboard boiler exploded, and the vessel was lost, with all the passengers and crew except those whose names are enumerated among those saved in the list to be found below. We have gathered the following fact from the first mate, MR. HIBBERD, who had charge of the boat at the time. MR. HIBBERD states that about 10 o'clock at night he was called to the command of the boat, and that he was pacing the promenade deck in front of the steerage house; that he found him. If, shortly after, upon the main deck, lying between the mast and side of the boat; that upon the return of consciousness, he had a confused idea of having heard an explosion, something like that of gunpowder immediately before he discovered himself in his then situation. He was induced, therefore to raise and walk aft, where he discovered that the boat midships was blown entirely to pieces that the head of the starboard boiler was blown out, and the top torn open; that the timbers and plank on the starboard were forced asunder and that the boat took in water whenever she rolled in that direction.

He became immediately aware of the horrors of their situation, and the danger of letting the passengers know that the boat was sinking, before lowering the small boats. He proceeded, therefore, to do this. Upon dropping the boat, he was asked his object, and he replied that it was to pass round the steamer to ascertain her condition. Before doing this, however, he took in a couple of men. He ordered the other boats to be lowered, and two were shortly put into the water, but they leaked so much in consequence of their long exposure to the sun, that one of them sunk, after a fruitless attempt to bail her. He had in the interim taken several from the water, until the number of ten. In the other boat afloat there were eleven. While they were making a fruitless attempt to bail the small boat, the PULASKI went down with a crash, in about 45 minutes after the explosion.

Both boats now insisted upon MR. HIBBARD'S directing their course to the shore, but he resisted their remonstrances, replying that he would not abandon the spot till day light. At about three o'clock in the morning they started amidst of the wailing of the hopeless beings who were floating around in every direction, upon pieces of the wreck, to seek land, which was about thirty miles distant. After pulling about thirteen hours, the persons in both boats became tired, and insisted that MR. HIBBARD should land. This he opposed, thinking it safest to proceed along the coast, and to enter some of its numerous inlets; but he was at length forced to yield to the general desire, and to attempt a landing upon the beach a little east of Stump Inlet.

He advised, MR. COOPER, of Ga., who had command of the other boat, and a couple of ladies with two children under his charge, to wait until his boat had first landed, as he apprehended much danger in the attempt, and should they succeed they might assist him and the ladies and children. There were eleven persons in the mate's boat, (having taken two black women from MR. COOPER'S.) Of these, two passengers, one of the crew, and the two negro women were drowned, and six gained the shore. After waiting for a signal, which he received from the mate, MR. COOPER and his companions landed in about three hours after the first boat, in safety. They then proceeded a short distance across Stump Ground, to Mr. Redd's of Onslow County, where they remained from Friday evening until Sunday morning, and then started for Wilmington. The mate and two passengers reached here this morning about 9 o'clock.

Nov 2, 2017  Blue Water Ventures International is pleased to announce that the company and its project partner Endurance Exploration Group have deployed to a shipwreck site thought to be the wreck site of the Pulaski, a paddlewheel steamship that sank in the waters off North Carolina in 1838.

The site is under an admiralty claim held by EXPL Swordfish Partners, a wholly-owned subsidiary of Endurance Exploration Group, Inc.

Expedition personnel on board the BVWI Recovery Vessel Blue Water Rose are now conducting operations to undertake a systematic excavation of the wreck. Dive teams are making the necessary preparations on specific areas of the wreck, so members of the marine archaeological team can focus on positively identifying the wreck. Other members of the expedition are engaged in additional surveying and mapping of the overall site.