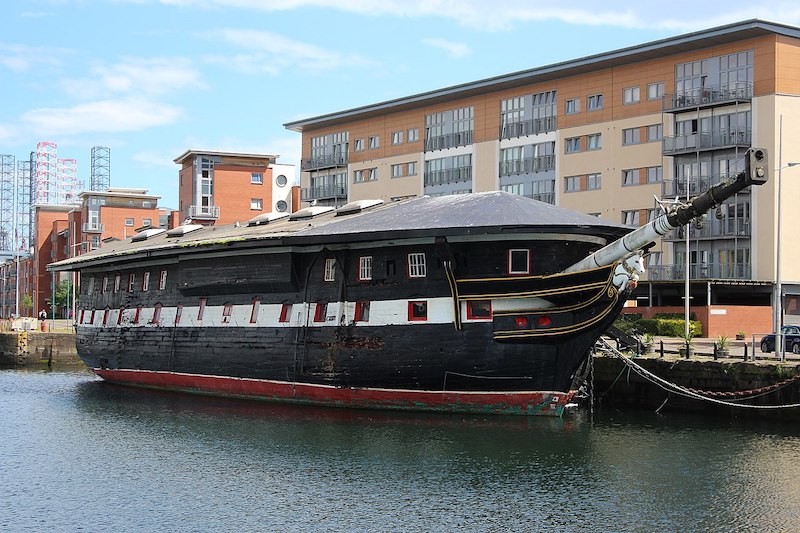 HM Frigate Unicorn, of 46 guns, was built for the Royal Navy in the Royal Dockyard at Chatham and launched in 1824. She is now the World’s last intact warship from the days of sail, one of the six oldest ships in the world and Scotland’s only representative of the sailing navy.

A sailing frigate was a powerful cruising vessel, heavily armed and fast, and Unicorn would have been one of the elite ships of the fleet in her day. However, she was built shortly after the great sea campaign against Napoleon, as part of a programme for re-equipping a battle-weary Royal Navy. This was the start of a long period of peace and she was not required for immediate service: she was not rigged, but instead her hull was roofed over and she was put into reserve.

HMS Unicorn spent her early years in reserve or ‘ordinary’ in the south of England and was brought to Dundee in 1873 to serve as the reserve training ship for the Tay. She carried out this function for nearly a century, and also acted as the headquarters ship for the Senior Naval Officer in Dundee during both World Wars.

Unicorn remained unrigged and under the cover of a roof her entire working life, and the roof which now covers Unicorn’s upper deck is believed to be the same one which was fitted immediately after her launch.

As a result of this continuous protection, Unicorn is considered to be the best preserved of all historic wooden ships in the world from her era.

Unicorn was also built at a time of great technological change, under the supervision of Sir Robert Seppings, the Surveyor of the Navy 1813-1832, at a time when a shortage of timber and the availability of iron was beginning to affect the way ships were built.

Unicorn represents the last great flourish of wooden shipbuilding, and also illustrates the birth of the iron steamship.

Unicorn, on the other hand, is most unusual amongst big ships in having a ‘home’. She spent her entire working life in one port, Dundee, has now been here 136 years, and is now firmly embedded in Dundee’s social and maritime history.