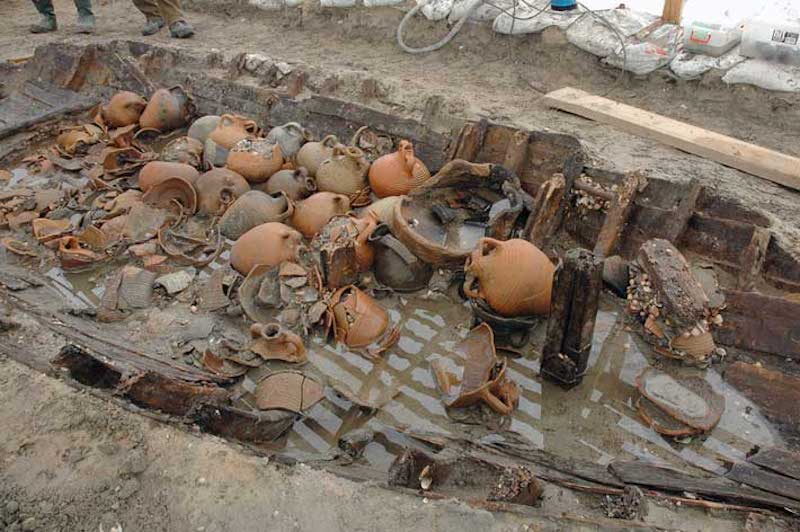 The largest group of Byzantine shipwrecks ever found emerged over the last several years from the mud of a now-landfilled harbor on the edge of Istanbul.

Excavation for a massive subway station that commenced in 2004 exposed—in what had once been the port of the emperor Theodosius—harbor walls, 34 ships, and successive layers of human habitation, buildings, and other structures, covering a several-thousand-year period from the late Neolithic to the late Ottoman.

Wooden combs, amphorae laden with cargo, and the skeletons of camels transported from Africa to haul stone during harbor construction are just some of the millions of artifacts uncovered.

The wrecks range in age from the fourth century B.C. to the eleventh century A.D. and represent different types of Byzantine merchant vessels, fishing boats, and naval craft, many in excellent condition. Several vessels represent types never before documented, including four rowed warships known as galea.

The excavation, by Istanbul University and the Institute of Nautical Archaeology has ended, for the most part, but the task of analyzing, conserving, and reassembling the Yenikapı vessels will take decades. Texas A&M University’s Cemal Pulak, who oversaw the recovery of five vessels, considers Yenikapı to be the single most important site yet found for understanding Byzantine ships.

Before Yenikapı, archaeologists’ detailed knowledge of Byzantine craft was limited to a handful of discrete sites. One of those is the eleventh-century Serce Limani wreck off the Turkish coast. Though its hull was fragmented, Serce Limani contained a unique cargo: close to a million fragments of glass that, through painstaking lab work, now offer an unprecedented view of medieval Islamic glasswork.