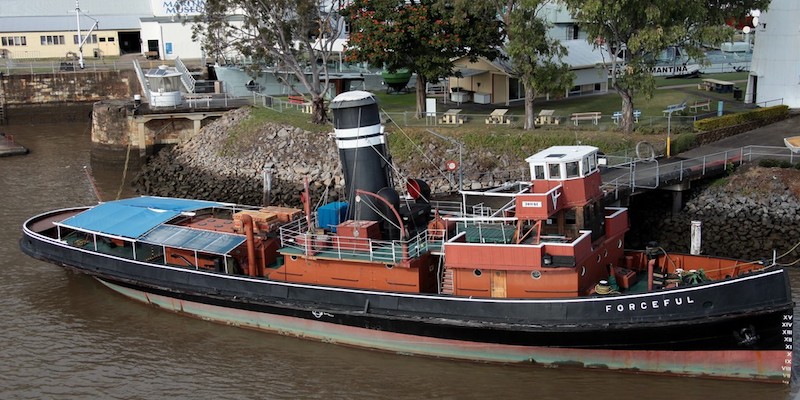 Some ocean towing and rescuing stranded and crippled vessels on the Queensland coast varied her river tows and harbor berthing routine of 40 years.

Chartered by the British government for Middle East service, Forceful was transiting Fremantle in January 1942 when the Australian Government withdrew approval. Commissioned the next month, HMAS Forceful worked around Fremantle until sailing for Darwin in October.

More port work and lighter tows to Thursday Island and Merauke, New Guinea, followed. On 4 November she rescued the crew of a U.S. B-26 which crashed off Bathurst Island.

In August 1943 she towed a landing ship which had its stern blown off to Brisbane. There she was paid off in October 1943, and returned to commercial service.

In 1964, SS Forceful became the last coal-burning tug on the Brisbane River. Her towing career ended in September 1970.

She was presented to the Queensland Maritime Museum in June 1971. With hard work by Museum volunteers she made a trial run in August 1971. She continues to be maintained by the volunteers. Frequent public and charter steamings each year took thousands down the river to Moreton Bay.

At present Forceful is laid up.