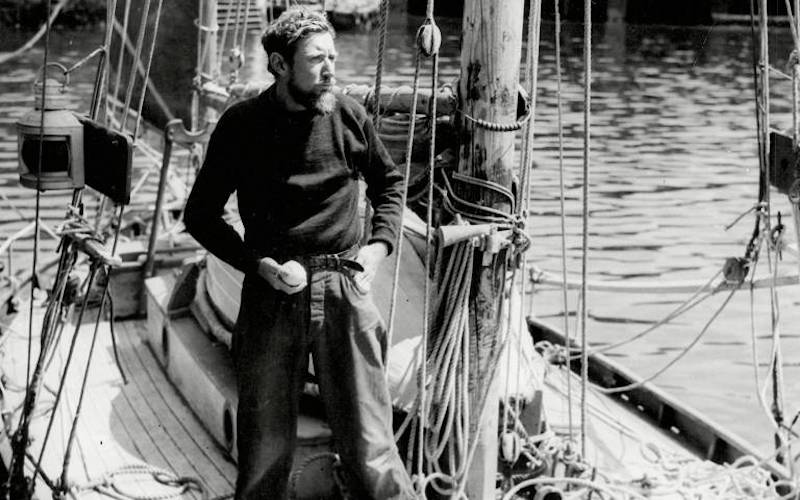 EDWARD ALLCARD, who has died aged 102, was a member of a band of yachtsmen who opened up the world’s oceans in the postwar years; he was best known for the remarkable voyages he made in his 34 ft two-masted yawl-rigged gaff cutter Temptress, in which he became the first to sail across the Atlantic single-handed in both directions.

Fed up with the conformity of postwar Britain, Allcard first set sail in Temptress in 1949 for an 81-day non-stop passage from Gibraltar to New York, which he recounted in his first book Single-handed Passage (1950).

He was followed by sharks all the way and survived gales and a 60-hour long hurricane when, on the crests of mountainous waves, “the whole boat vibrated with the force of the wind and then did a sickening plunge into the trough before being wrenched upwards like a lift, ready to be assaulted by the following mountains”.
Once, he was knocked unconscious by a pulley which struck him on the head, and he was lucky not to roll overboard.

The even more gruelling return trip in 1950, described in his second book, Temptress Returns (1952), took Allcard into hurricane conditions; he was dismasted, broke two toes and cracked several ribs approaching the Azores, where Temptress had to be lifted out for repairs.
The subsequent resumption of the voyage caught the attention of the British and international press when, after several hours at sea, Allcard was joined by a beautiful young Azorean stowaway, Otilia Frayão, described by one newspaper as a “raven-haired Portuguese poetess”, who had concealed herself in the forepeak (the front end of the hold). He realised that she was risking disgrace in her native land for travelling unchaperoned with a man, but when he offered to drop her off at the island of San Miguel she burst into tears. Eventually he put her ashore in Casablanca, from where she was flown to Britain by a newspaper while he sailed on alone to Plymouth.
The idea that a good-looking man and a good-looking young woman could spend 34 days and nights alone together, and resist temptation, proved too much for some to swallow. One newspaper announced that Allcard was definitely planning to marry the girl and, according to one report, it was said that Allcard was black-balled from the Royal Yacht Squadron for neglecting to do so.
“Edward is a good friend, that’s all,” Otilia was quoted as saying. “He does not want to marry; neither do I. I am too independent for that.” Allcard and Otilia Frayão went their separate ways soon after making landfall in North Africa, but in 2009 he caught up with her through the internet and with his wife Clare spent his 95th birthday with Otilia and her husband.

The son of a stockbroker, Edward Cecil Allcard was born on October 31 1914 at Walton-on-Thames, Surrey, and educated at Eton. After school he became an apprentice naval architect with D & W Henderson on the Clyde and then Harland & Wolff, qualifying before the Second World War.
He had learnt to sail at the age of six, taught by his grandfather’s boatman. When he was 12, his grandfather died leaving him a 15 ft dinghy, the first of 18 boats Allcard would own over the course of his life. During his naval architecture apprenticeship his free time was spent sailing off the west coast of Scotland or driving motorbikes and sports cars. He once drove around Brooklands in a Bugatti.
When he was 20, sailing off the coast of Ireland, his boat sank and he had to swim a long distance to reach the shore. He completed his first single-handed voyage in 1939, sailing from Scotland to Norway and back. During the war, denied the opportunity of active service owing to poor eyesight, he designed and worked in air-sea rescue craft.
While in New York with Temptress, Allcard spotted a 36 ft wooden yawl, Wanderer (which he later renamed Sea Wanderer), built in Lübeck in 1911, lying derelict in the mud of the Hudson River. He bought her for $250 and after returning home in Temptress, took a job to fit her out, rerigging her as a ketch, with a view to sailing her single-handed round the world via Cape Horn.

In 1955 he appeared as an unusually well-qualified “castaway” on the BBC Radio programme Desert Island Discs. In 1957, shortly before embarking on his circumnavigation, he challenged his fellow sailor Peter Tangvald to what would be the first ever east-to-west single-handed transatlantic race – from the Canaries to Antigua; he lost by two days.He then set sail in Sea Wanderer on a leisurely round-the-world odyssey which would take 16 years from start to finish, with much to-ing and fro-ing. With no sponsorship and without ship-to-shore radio, satellite navigation or life-raft, Allcard earned his living in the charter trade along the way.

He would chronicle his adventures in Voyage Alone (1967) and Solo around Cape Horn, published last December, in which he described the voyage in 1966 from Buenos Aires, down the Argentine coast through the Roaring Forties, to Tierra del Fuego where, after being pushed back several times by heavy gales, he finally succeeded in rounding Cape Horn a year before Sir Francis Chichester repeated the feat in 1967. His voyage continued west through the Beagle Channel, past Ushuaia, and then northwards along the coast of Chile through the Patagonian Channels to Valparaiso.
He supplemented his meagre rations with fish and crabs from local fishermen, sides of lamb from friendly ranchers, as well as mussels and geese he harvested himself.

In 1967 he met Clare Thompson, 31 years his junior and the daughter of Brigadier W F K Thompson, The Daily Telegraph’s defence correspondent 1959-76. She had read an article about his exploits in a newspaper and wrote him a fan letter. In 1968 they drove together from Britain to Singapore in a Land Rover; they would be married in South Africa in 1973.
After their daughter was born in 1969, Allcard resumed his westward course aboard Sea Wanderer from Singapore, but went missing in the Indian Ocean and was more than three months overdue for Mombasa when he suddenly reappeared, explaining in a telegram: “Delete Mombasa substitute Seychelles have found love nest come soonest.”

There he and Clare bought a 17-acre coconut plantation and settled for a time in a palm-thatched hut before Allcard continued his journey, with his family joining him in the West Indies when he completed his voyage in 1973.

In 1974 Edward sold Sea Wanderer and bought Johanne Regina, a 69 ft gaff-rigged ex-Baltic trader built in 1929. Together with his wife he spent the next 30 odd years restoring her, while cruising from the Caribbean to Europe, then back to the Seychelles and on to the Far East where they spent four years cruising and dodging the attentions of pirates and immigration officers, before eventually sailing back to Europe – adventures chronicled by Clare Allcard in A Gypsy Life (1992).

On the way back they stopped off in Turkey for a year, then took up residence in the tiny Pyrenean state of Andorra, though Allcard continued to spend half the year afloat until 2006 when, aged 91, he decided to hang up his anchor. In Andorra he took up skiing, continuing until he was 92.
In 1991, at the age of 77, Allcard became a foster father to Thomas Tangvald, then age 15, after his father Peter (Allcard’s former transatlantic race rival and great friend) and sister Carmen were killed after being shipwrecked on a reef in Bonaire. Thomas himself was lost at sea during a single-handed passage from French Guiana to Fernando do Noronha, off Brazil, in 2014.

Allcard is survived by his wife and daughter, and by another daughter from a previous marriage.