The S.S. Orcades, of the Orient Steam Navigation Company, was torpedoed by U-172 and sunk in the South Atlantic on 10 October 1942. The following account is given in David Masters’ In Peril on the Sea:

‘The liner Orcades with 711 passengers and 354 officers and crew was steaming alone at speed in a moderate gale with rough seas and a heavy swell when a U-boat caught her on October 10, 1942.

It did not take Captain C. Fox long to find out that she was badly holed. The possibility of keeping her afloat was so uncertain that it was essential to get the passengers into the boats without delay. The order sent the crew to their boat stations at the double and the operation began to go like clockwork. It was plain from the way the men worked under the supervision of the Boatswain, J. Murphy, and the quiet orders of the Chief Officer, R. J. Craddock, that the boat drill had not been wasted on them. In the most orderly manner the passengers were passed into the boats which were quickly and safely launched upon the rough seas. The engineers still remained at their posts in the engine-room while Captain Fox sought to find out the full extent of the damage. He was keen to keep the Orcades afloat. 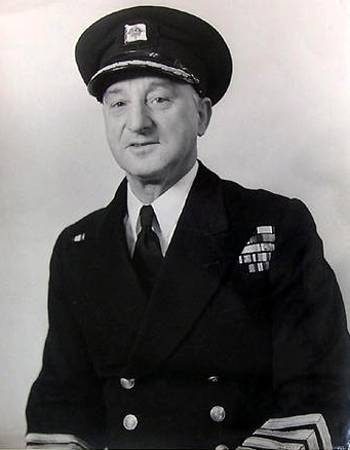 Having embarked his passengers in safety, Captain Fox and his chosen men strove to save the liner. They had no chance. The U-boat saw to that. After striving for three hours to keep her afloat, the Master gave the order to abandon ship and the men jumped overboard to the rafts.

The last to leave as she was sliding under was Captain Fox who, seeing two men in trouble as he was swimming towards a raft, helped them both to safety.

Over a thousand human beings were left tossing about on rough seas in lifeboats and rafts in the middle of the ocean. They had escaped from the sinking ship, but whether they would escape with their lives was still uncertain. Signals had been sent out, but had they been received? If so, how far away was the nearest ship and could she reach them before the storm grew worse and started to take its toll of them?

Those were the questions which Captain Zawarda of the Polish ship Narvik hastened to answer as he steamed to the rescue, while the Chief Officer of the Orcades did his best to keep the boats within hailing distance of each other.


It was no easy task, for wind and wave are factors over which man has no control, yet his encouraging words permeated through the little fleet of lifeboats and rafts and did much to sustain the spirits of the survivors. For aught Captain Zawarda knew, he was himself steaming to destruction. If the U-boat were still the area where she had sunk the Orcades, the German commander would certainly do his best to make the Narvik his next target. The risk was one whichhad to be run and Captain Zawarda accepted it without question.

When the Narvik eventually came upon the first boat, the task of snatching up the survivors proved to be very long and difficult owing to the rough seas. Chief Officer Chelminski, however, who took control of the rescue operations, handled them so skilfully that he and his men succeeded in getting them on board safely. Then the search began in earnest, for by now the boats were widely separated. To and fro and round about the Narvik steamed, coming on a boat here, a raft there, stopping to pick up the survivors and succour them when they were on board.

Captain Zawarda would not give up. For hour after hour he scoured the mounting seas and the number of survivors on board his ship increased from five hundred to six hundred. He now knew that all the boats had managed to get away. Unless some of them had capsized, there were others still to be accounted for. He held doggedly to his search and the survivors mounted to eight hundred. As the hours went on it crept up to nine hundred. All the time there was the risk that the U-boat which had destroyed the Orcades would come on the scene and attack the Narvik.  Zawarda was only too aware of it, but the mission of mercy he was carrying out far outweighed all risks and personal considerations. He would not give up. So long as he believed that any human being was adrift on that inhospitable sea, he was determined to find him. When at length, after a final look round, he was convinced that his self-imposed task was over, he set course for port.

That long-sustained rescue operation which lasted twelve hours ranks among the finest rescue operations of the war. Captain Zawarda and his crew saved almost the whole complement of those on board the Orcades when she was sunk. Some of the engine-room staff who jumped into the sea at the last moment did not survive, but of the 1,065 people on board, Captain Zawarda rescued 1,021, for which fine feat he was awarded Lloyd’s War Medal, as was Captain Fox of the Orcades for getting all his passengers off the ship and making such a prolonged and plucky effort to save her.’

Source: Old P&O /“ In Peril on the Sea” by David Masters