The brig Cyprus: How an English surfer solved the mystery of an Australian pirate ship in Japan 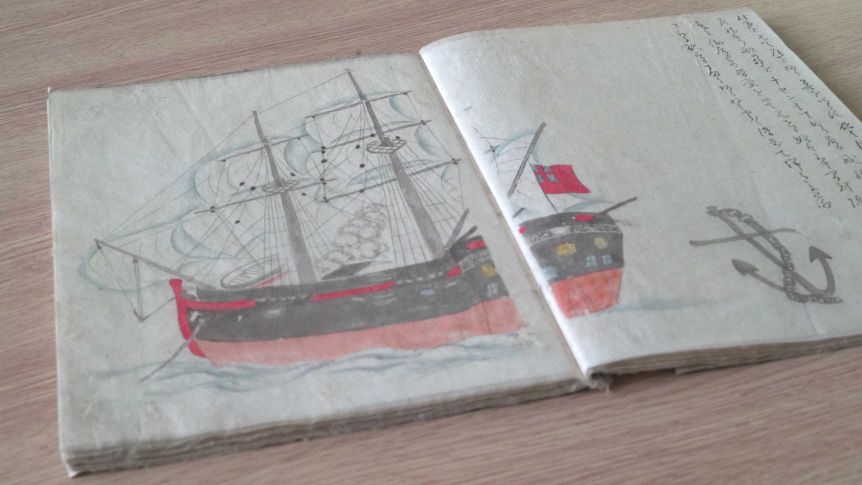 An amateur historian in Japan has unearthed a crucial piece of a puzzle which ties in to an intriguing chapter of Australian history.

The brig Cyprus was an Australian supply ship that was hijacked in 1829 in Tasmania by a group of convicts and skippered by a man named William Swallow.
When he was eventually recaptured in China, Swallow testified that he had sailed to Japan, but no-one believed his story.

Mr Russell, who speaks and reads Japanese fluently, has lived in Japan for 30 years and teaches English in Kobe.

It all began three years ago when the keen surfer bought a beach shack on Teba Island, off the coast from the township of Mugi on Japan's Shikoku island.
The back of his house looked out over the stretch of water where a "barbarian" ship had sailed in 1830 and been fired upon by samurai commanders, acting on orders to repel any foreign incursion.

"I could see the spot where the ship had moored about 700 metres off my back garden so I was immediately drawn to find out more about what happened," Mr Russell said.

Japan was a "closed country" at that time, ruled by a Shogun and governed by local samurai lords.

Mr Russell wanted to know more about the ship, and asked the curator of the local archive if he could see the original samurai records of the ship's visit.
One of those records included detailed watercolour paintings of the ship and its crew.

"As soon as I found them I was interested because it was flying a British red ensign — a British flag — and the ship's name wasn't there," he said. "They didn't know what the ship was doing there and from there it basically started."

The old Japanese script was hard to decipher and did not translate well into modern Japanese.

At first Mr Russell's research focused on the whaling industry. One of the watercolour paintings showed smoke coming from the bow of the ship — he thought this might have been a sign whale blubber was being boiled to extract whale oil. Mr Russell read Herman Melville's novel Moby Dick and found parts of it backed up his belief the ship was a whaler.

Russell and pupil used topic in English lessons
But many other details of the ship did not point to it being a whaling vessel.

He asked one of his English students to help him — so 82-year-old Shinoda took a copy of the documents home and began the process of translating it into modern Japanese. The pair used the topic for their English lessons, analysing every detail they could find.

Then came the breakthrough.
"As I was looking at whalers, what I found was that mutiny wasn't just something that happened on the Bounty," Mr Russell said.
"It was something that happened about every five years — on some ship somewhere there was a mutiny. "And actually during his lesson, as I was teaching him English and we were talking about this, I searched for 'mutiny 1829' and it popped up during his lesson. "When I saw the reference to Japan, I just thought, 'this is it', and at the end of the lesson I high-fived him."

This, Mr Russell says, was a rather awkward moment for an 82-year-old Japanese man.

What the internet search revealed was the mutiny of the brig Cyprus — which is where the link to Australia comes in.

The Cyprus was owned by the colonial government in Tasmania — then Van Diemen's Land — and was used as a supply ship for penal colonies in Tasmania. 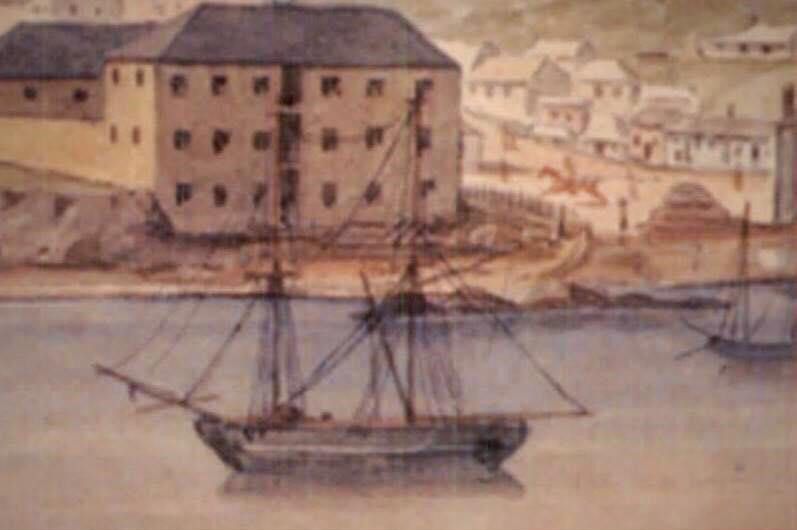 The brig Cyprus — the word brig describes a sailing ship with two masts — was one of the ships painted by Augustus Earle in his 1825 panorama of Hobart, which is kept by the State Library of New South Wales.

It was sailing from Hobart to Macquarie Harbour penal station on a routine voyage, when it called in to Recherche Bay to take cover from bad weather.A number of convicts overpowered the officers on board the ship and took control, and 18 convicts were on board when it sailed away.

The archivist in Tokushima, Takashi Tokuno, was surprised by Mr Russell's breakthrough."Two completely separate historical stories — an incident that's a little famous in Australia and an incident that's a little famous here in Tokushima, Japan," he said. "The two incidents connected here — it also connects Japan and Australia."

The samurai account by Makita Hamaguchi, Illustrated Account of the Arrival of a Foreign Ship, records the comments of local samurai commander, named Mima, who was monitoring the ship's movements. "I've been suspicious of that ship since it arrived yesterday afternoon," it records Mima as saying. "Through the spyglass, I can see a floor halfway up the mast and one of the crew climbs up there to look out. "The men on the ship do not look hungry at all."

The following day, another commander named Yamauchi orders the painter to disguise himself as a fisherman and row his boat out to get a closer look.
Hamaguchi's record recalls: "As we approached the barbarian ship the dog wagged its tail and whined at us." "Its face looks like my illustration. It did not look like food. It looked like a pet," it reads. "Some of them were painting the outside of the ship with tar, one was climbing the mast and another was mending the sail. "Each of them was involved in some task. All of them stopped work and looked at us. "At first, we kept our distance at about 50m, but they waved to us to come closer and did not seem to be hostile so we rowed over to get a better look."

Account includes drawing that could be a boomerang
In another account, titled A Foreign Ship Drifts in Off Mugi Cove, a local farmer named Harada is reported to have rowed out to the ship to take a closer look.
"The crew then tossed gifts: something shaped like this, a metal bell and what looked like a religious icon of a woman framed in black and covered with glass into our boat … we returned each of them," it reads.
The reference to "something shaped like this" included a drawing of what Mr Russell believes was a boomerang.

Yamauchi was under orders from the Shogunate in nearby Tokugawa, whose policy stated: "All foreign vessels should be fired upon. Any foreigner who landed should be arrested or killed."

Yamauchi ordered his samurai officers to communicate this to the crew. "Go aboard the barbarian ship and with sign language tell them to leave immediately," the report says. "If they do not comply, show them the large ball and tell them that we are ready to fire it at them from Teba Island and reduce them to matchwood."

The samurai record says when the ship showed no signs of departing, a cannon ball was fired from the island — it flew between the two masts of the ship and landed on the other side, in the water.

When the ship still did not appear to be weighing anchor or spreading its sails, the samurai fired on it again. It was only then that the crew started to sail the ship westwards, but the lack of breeze made their getaway very difficult.

The samurai account says the commander ordered a direct hit on the ship. "They ordered fire to be directed at the waterline in the red copper sheathed area. Two cannon balls hit and shook the ship badly," it reads.