WRECK OF THE R.M.S. QUETTA. 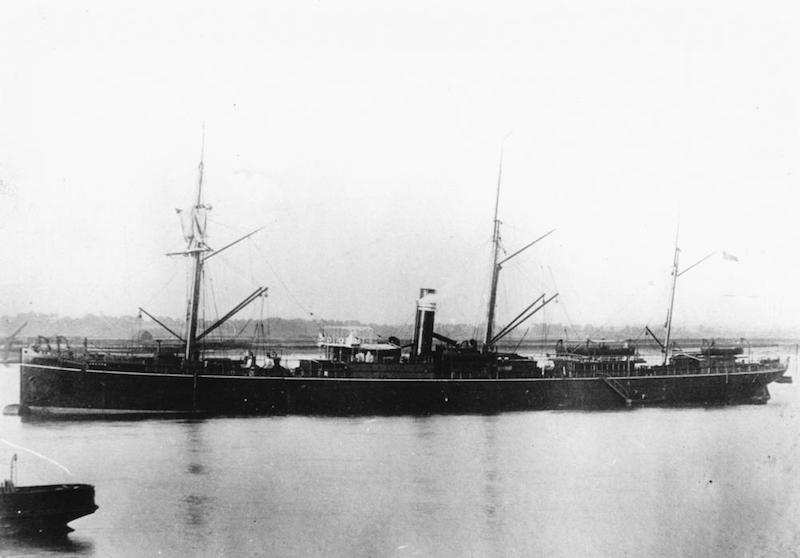 Rarely if ever before has so deep and so general a gloom been cast over the community of this colony as that which has been occasioned by the sad catastrophe which occurred in Torres Straits on Friday night. The wreck of the R.M.S. Quetta in the vicinity of Adolphus Island with a loss of 173 lives is one leave to their painful mark upon the annals of the world's shipping.

It was late on Saturday afternoon when the news became known in Brisbane, and although the main fact of the terrible event was but too well authenticated for doubt, no particulars of the occurrence nor any lists of the survivors were available until nearly midday on Sunday. All day groups of agitated men and women waited about the Electric Telegraph and newspaper offices, anxious for something to relieve their gnawing suspense as to the fate of loved ones known to have been on board the Quetta.

The offices of the managing agents of the British India line were opened during Saturday night, all day yesterday, and far into last night, and the officers from Mr. Munro and Mr. Bland downwards were most attentive in affording all information in their power, many persons remaining for hours to gain the latest particulars that might reach the hands of the agents. During yesterday, as the news came to hand, we issued several "extraordinaries," and these were most eagerly sought ; indeed, the crowds in the Courier vestibule were at times quite unmanageable. Mr. Parry-Okeden, the Under Colonial Secretary, had a tracing of the chart showing the Torres Straits route pre- pared and posted at the Electric Telegraph Office, and of this we are enabled to present our readers with a copy.

From the messages which we publish below-from our own correspondents and from official sources - the narrative of the wreck is sufficiently complete. The fine ship of nearly 3500 tons was bowling along under a full head of steam on a bright moon-light night in the track recommended by the Admiralty survey, and under charge of an experienced pilot, when suddenly without warning she struck an unknown rock, and in three minutes sank in deep water.

In an instant the quiet and peaceful scene on the saloon deck, so well-known to all who have travelled in the ocean steamships of our day, was changed to one of horror and confusion. Groups of ladies and gentlemen chatting pleasantly together, or enjoying the beauty of a moonlight scene on the water, were thrown into wildest alarm by the fearful grating of the vessel's hull upon a hidden rock. Before they had time to more than half realise the fatal danger of their position the ship heeled rapidly over to port, and most of them were swept into the sea to rise no more.

Meanwhile the European seamen responded nobly to the call of duty, and each man took his place by the "falls" of the boat to which he had been assigned. Probably had a few minutes longer been granted them many of the valuable lives whose loss we now mourn would have been saved. But the accident was too sudden for any provision to have availed. Two boats were released, but one of these had been seriously damaged in launching and the other was, bottom upwards.

The Javanese who were deck passengers from Mourilyan to Batavia and the coloured men of the crew appear to have almost monopolised one of the boats; but the other was made available and did good service. By these means a number of passengers got ashore. Here the survivors found but poor comfort after the perils they had escaped. Wet and cold, not more than half clad, without food and without a fire, they waited for day. Early on Saturday morning a boat was sent to Somerset, Cape York, where Mr. Jardine, did all he could for the comfort of the weary seamen, and, intercepting the Victoria as she passed the port, went out and was soon enabled to succour the people left on Adolphus Island.

From the map which we publish in this issue the surroundings of the accident will be made somewhat clearer. 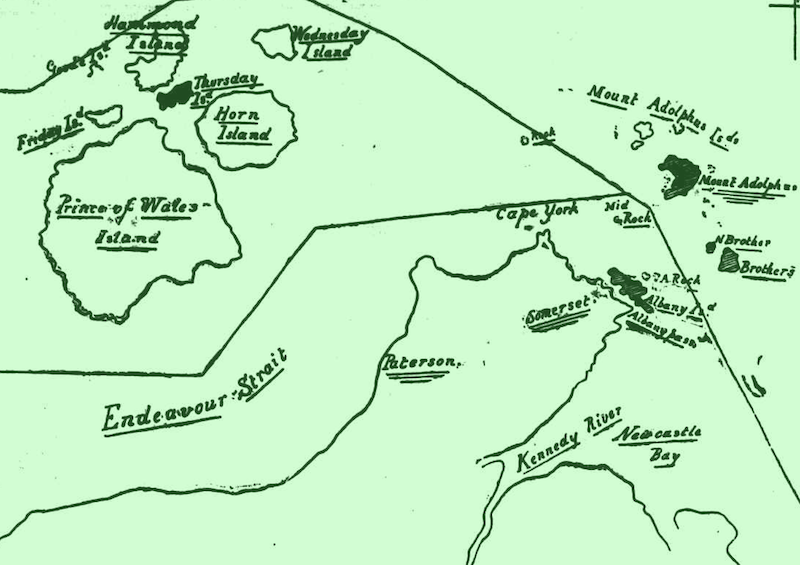 Mount Adolphus, on the largest island of the group, is 548ft. high, and is one of the marks by which vessels steer when they take the outter route in preference to the Albany pass, which latter is sometimes used, but is not recommended by the Admiralty surveyor. The exact position of the wreck is not certainly known, but as the passengers were landed on the North Adolphus, the ship struck somewhere in that vicinity, probably close to the track shown on the map, and to the south-west of Mount Adolphus. This island is three and three-quarter miles north by east from Somerset, and twenty-seven miles south-east of Thursday Island. So far as was previously known, the track in this vicinity is reef marked on the chart as Mid Rock, which in one of the telegrams was incorrectly stated to be the scene of the wreck. This rock has a depth of two fathoms at low-water springs.

Our map shows the northern part of the Cape York Peninsula, with Somerset and Paterson, (the telegraph office), with the Adolphus Islands to the northward and Thursday Island to the north-west.

In answer to a telegram from the B.I. and Q.A. Company, inquiring whether it was true as stated in the Press reports that the Quetta struck on Mid Rock, Captain Sanders wired yesterdav evening as follows :- " Thursday Island, 6 pm. : Contradict statement that Quetta struck Mid Rock ; pilot and self firmly believe it is a rock unknown."

It may be mentioned that although the Torres Straits route abounds with dangerous reefs, this is the first serious accident since the inauguration of the British-India service, a fact which speaks well for the skill and carefulness of both commanders and pilots.

We learn that the Hon. W. Graham, M.L.C, had proposed to take passage for England by Quetta. Almost at the last moment he discovered he could not get a cabin so he changed his purpose, and left the same day by the Maranoa for Sydney, where he caught the Orizaba.

An incident, which in the light of subsequent events has a very melancholy interest, occurred as the Quetta was hauling off from the South Brisbane wharf. By some means a portion of her gearing fouled the Grazing Butchering Company's shed doing considerable damage.  As might be expected some ill-tempered language passed between people on the shore and members of the ships company. The chief officer was heard to remark, "Well, it's always the case you'll find; we get a bad start and we'll have a hot time of it going home."

It is reported that a coloured man, whose duty it was to assist the steward, asked for his discharge just before the Quetta left Brisbane. He gave as a reason that he could not agree with the steward, but it appears that he also had a presentiment that some disaster would occur on the homeward journey. The captain refused to grant the discharge, and the man deserted, hiding, so it is reported, in Sandgate until after the departure of the steamer.