Identity of 17th Century shipwreck revealed as The Fame 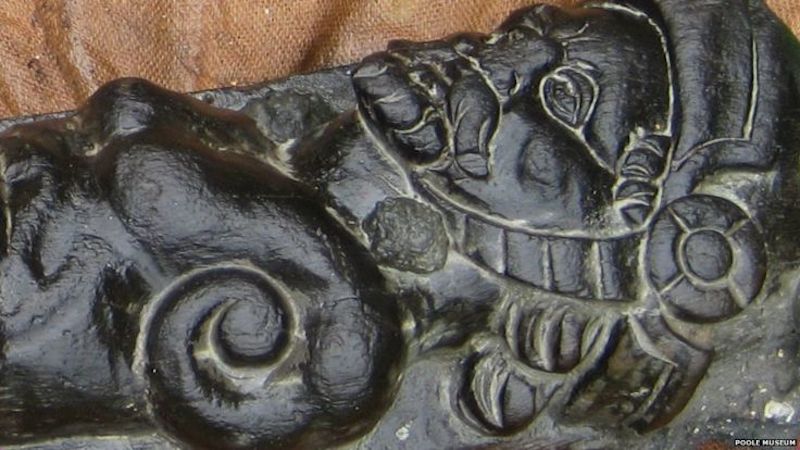 The identity of a 17th Century ship wrecked off the Dorset coast has been revealed.

The so-called Swash Channel Wreck was discovered in a sand and shingle bank outside Poole Harbour.

Experts believe it to be a Dutch merchant vessel named The Fame which foundered in a storm in March 1631.

The name was revealed at an event to mark its rudder - raised from the seabed in 2013 - going on public display at Poole Museum.

The 8.4m (28ft) rudder, with a moustachioed face carved into it, was lifted on to Poole Quay by Bournemouth University marine archaeologists in 2013 after almost a decade of investigation and excavation work.

The wreck had been initially discovered in the 1990s although its name remained a mystery.

'Everything fits'
Following the raising of the rudder, historians were able to study historical records and analyse the timbers to confirm the ship as being The Fame.
Bournemouth University marine archaeologist Dave Parham said finding the name added a "human story" to the wreck. "It's the right name at the right date with the right age of the timbers. Everything fits, although you can never be sure." "This is a ship most likely going from the Netherlands to the Americas using Poole as a stopping-off point. It is a lens through which we can view the history of Poole."

Historian Dr Ian Friel who carried out much of the research said the wreck was a "remarkable find".

Despite there being no central record of shipwrecks at the time, he unearthed contemporary accounts of the Dutch vessel being regarded as a danger to shipping after it dragged its anchor and broke up on a sandbank. He also concluded it could have been sailing without any cargo.

The Fame
*An armed merchantman owned by two Dutchmen, Hercules Garretson and Cornelius Veene
*Tree-ring evidence suggests that the hull contains some wood felled between 1619 and 1639 in the Netherlands or Germany
*Set sail from its home port of Hoorn, near Amsterdam, on a voyage to the West Indies in January 1631
*The master was called John Jacobson Botemaker and there were some 45 people on board
*It took shelter in Studland Bay but dragged its anchor in a storm and broke up on Hooks Sand in February 1631
*No-one died so it was not legally a "wreck", but much of its contents and cannons appear to have been looted
*Contemporary records also show it was regarded as a danger to shipping
*Remains were discovered in a sand and shingle bank which was struck by a dredger in 1990.
*The bowcastle, part of the upper structure and carved rudder were raised by Bournemouth University marine archaeologists between 2011   and 2013 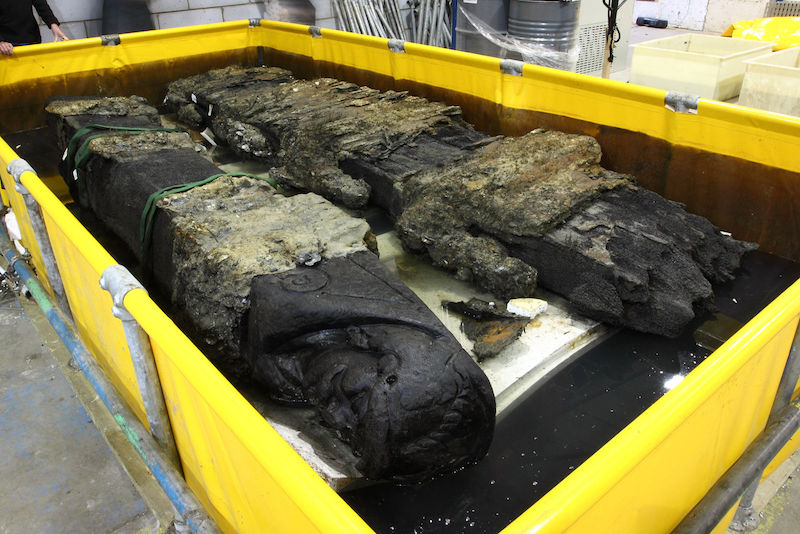 The raised rudder was dried and preserved during a three-year conservation effort by York Archaeological Trust.

It has gone on show at Poole Museum with other recovered artefacts.

The remains of the wreck have now been covered in sand to protect it from the seawater.