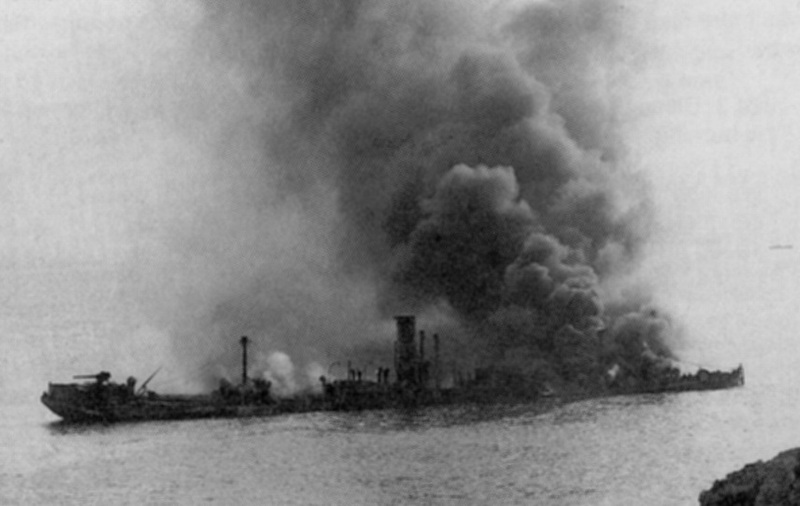 On 24 March 1918 a convoy of 16 merchant ships escorted by 6 destroyers and led by HMS Syringa passed the Isle of Wight carrying supplies to Britain from New York. Two of the ships did not complete this journey and one sits near the Isle of Wight to this day.

An 8,000 ton armed steamer, with a crew of 47, the SS War Knight was an American ship built by Union Iron Works in San Francisco and owned by the London-based company, The Shipping Controller. On its final journey it was carrying oil from Philadelphia and New York to London to aid the war effort.  Importantly, within the convoy was a second ship, O.B. Jennings, the world’s largest oil tankerv (10,050 tons), carrying naptha (a flammable liquid mixture of hydrocarbons). The O.B. Jennings had been commissioned by the United States Shipping Board along with a crew of 72 to join the convoy to London.

In the early hours of 24 March 1918 the convoy had been travelling past the Isle of Wight when it had received warnings about a possible German submarine presence in the area after suspected explosions and flashes of light in the distance. The result of these warnings was that the convoy began travelling without lights and the HMS Syringa altered the convoy’s course. Unfortunately, due to the size of the convoy, receiving signals and reacting upon them was a slow process and the War Knight, in particular, did not react with the speed of other members of the convoy.viii

A couple of hours later, at around 2:15am, the order to alter direction was given again and, once more, only some of the convoy reacted, splitting into two groups about a mile apart with War Knight and O.B. Jennings in separate groups. The captain of HMS Syringa attempted to unite the two groups, in doing so bringing the War Knight and O.B. Jennings closer together, a situation worsened by the darkness.

As the convoy re-grouped, the master of O.B. Jennings recognised that War Knight was turning towards them, heading for a collision. O.B. Jennings was unable to move out of the way in time and War Knight struck its side, resulting in the release of the naptha cargo from O.B. Jennings, which flowed across the deck of War Knight. The nature of the cargo meant that a fire began both on the S.S. War Knight and on the O.B. Jennings, but also on the surface of the water surrounding the ships.

On board the War Knight Third Officer George Brown found Chief Engineer David Falconer who had ensured the survival of the second, third, fourth and fifth engineers, a fireman, a messroom steward and cook by placing them together in the Engineers alleyway. Although enveloped in smoke and struggling with the heat and fumes, they managed to revive themselves with Brown’s aid to a point where they were able to escape through a skylight in the Engineers messroom.

Apprentice Reginald Clayton was also found alive after flooding the magazine, preventing a major explosion explosion on-board. All were able to evacuate the vessel, jumping into the sea and attempting to avoid the burning naptha on the sea’s surface.xii Of the crew of 47, these men were among the 11 survivors from War Knight, although some succumbed later in hospital from their wounds.

War Knight, still ablaze, was towed by the destroyers towards shallow water to remove the danger. However, during this process, the hull of War Knight struck a mine laid by UC-17, which ignited the oil cargo and created a further explosion. The vessel was left to settle in Freshwater Bay on the Isle of Wight, within 15 miles of its destination.

Meanwhile, destroyers had also pulled up alongside O.B. Jennings to rescue its crew. As one of the crew explained to the press later, “The burning naptha had poured out onto the sea, and it would have been folly to launch lifeboats.”xvi Only one member of crew from O.B. Jennings, Mr. Shea, was lost. Following rescue of the crew, O.B. Jennings was sunk by destroyers preventing it causing damage to surrounding vessels. This ensured all flames were extinguished and allowed the ship to be surfaced at a later date for repairs and continued use; although she too was later sunk by a mine in the Atlantic.
Written and researched by Kaite Cassels (MAT HLF Forgotten Wrecks Volunteer)

View from the shore
In 1934, Fred Mew published a first-hand account of what he saw of the wreck in his book, Back of the Wight. Mew lived on the Isle of Wight and spent much of his time on the coast, and was a member of the Life Saving Apparatus Company at Blackgang, so he witnessed many shipwrecks on the coast. At the time he was an officer’s servant at Cliff End Battery and went down to the bay to see what was happening. The War Knight had been beached in Freshwater Bay, near the cliffs. The cargo - including things such as bacon, lard, flour, oil and rubber – was washed up on the shore, and for weeks the area was busy with people finding all the salvageable cargo to take home. He says that at the time people didn’t have much food at home, especially meat, so the pig meat was particularly popular among those on the beach. Even months after the wreck, he remembered, cargo such as lard could still be found buried in the sand. Mew says that during the war it was difficult to get news of what actually happened to ships, for example whether they were torpedoed by a submarine or hit a mine, and so he was unsure of what happened to the crew – although he thought many of them may have been burnt to death.
Written and researched by Lucy Smith (MAT HLF Forgotten Wrecks Volunteer)

The War Knight today
Forty-five years after the sinking, bales of raw rubber from the War Knight's cargo washed up in Freshwater Bay and beachcombers received £4 per bale in salvage money.
Today the wreck lies in Freshwater Bay, Isle of Wight at a depth of approximately 13m.

The HLF Forgotten Wrecks of the First World War project has enabled the Maritime Archaeology Trust to undertake diving fieldwork on the site of the War Knight. Due to the nature of the ship's loss, the site is extremely dispersed but much of the vessel's early steam turbine engine and other marine debris can still be seen.

The War Knight's crew
Two of the men on board the War Knight received medals: Chief Engineer David Falconer and Apprentice Reginald Clayton received posthumous Decoration of Albert medals after succumbing to their wounds in hospital. Falconer was recognised for his gallantry in rescuing men succumbing to the fumes below deck and giving up his own lifejacket to save a fellow crew member, whilst Clayton’s efforts to flood the magazine were rewarded.

Only three of War Knight's crew are recognised on memorials on the south coast. War Knight's loss was considered a marine risk rather than a war risk, so the contribution and sacrifice made by the majority of the ships crew is not formally recognised.

Dave Wendes, Southampton based dive boat skipper and historian, has been researching the crew of SS War Knight for many years. Through his extensive research he has managed to contact a number of family members of War Knight crew, who have kindly shared photographs and other details about their relatives. Dave has also tracked down the merchant navy record cards of some of the crew who survived.

In common with most merchant ships of the time, the War Knight had an international crew, coming from England, Ireland, Scotland, Wales, Norway, Sweden, Belgium, Newfoundland, Jamaica, USA and Australia.