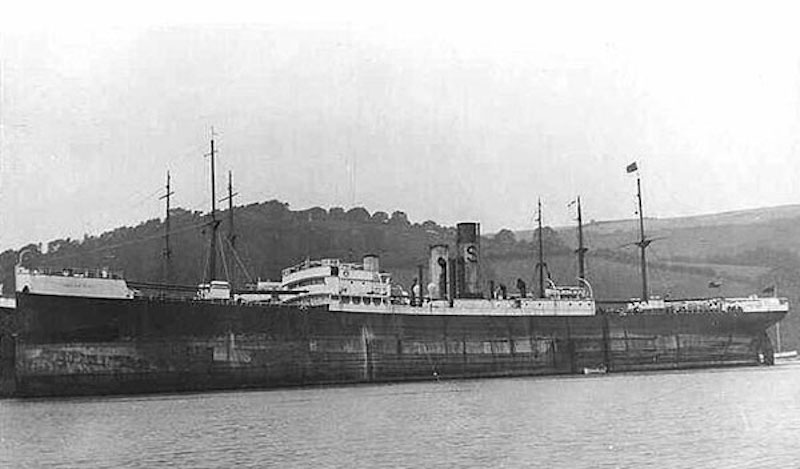 Relatively early in the First World War, in March 1915, a remarkable incident between a British cargo ship and a German U-boat occurred near the Isles of Scilly.

At 07.40 on 12th March 1915, SS Indian City of Bideford, a brand new vessel, was steaming towards Le Havre with a cargo of cotton, copper and cask staves from Galveston in the United States of America. When they were about 10 miles south of St Mary’s, the crew spotted a U-boat some distance away on the starboard bow.

With great courtesy, the captain of the U-boat U-29, Commander Otto Weddigen, told John Williams, the master of the Indian City, that he would give him 20 minutes to abandon ship before it was torpedoed and that the U-boat would tow the life-boats to safety.  All 37 crew made it to the two life boats and sat watching as their ship was torpedoed and caught fire. Although it was clearly doomed, the ship did not sink until 04.30 on 13th March, 1915.

Having taken the life boats in tow, Commander Weddigen then invited Captain Williams on board for a glass of wine, which they took on the deck of the U-boat.  From this meeting, Williams was able to find out a number of facts about U-boat operations:

•    The incident between the U-boat and the SS Indian City had not been a matter of chance. The Germans had specific information about the merchant ships bringing cargo to Great Britain and her allies and he warned John Williams that he had other vessels in his sights.
•    Commander Weddigen disclosed that U-29 was capable of maintaining a speed of 17 knots on the surface and 14 knots submerged; he also stated that it took only 30 seconds to submerge the submarine.
•    There had been 8 submariners on deck, all of them officer class with previous experience as merchant mariners. Williams noted that they all spoke good English.
•    Commander Weddigen expressed a view that the war would be over within a couple of months and that there was great benefit in Germany and England joining forces.

During this time U-29 had been towing the Indian City life boats towards the Isles of Scilly, but when they were within 5 miles of the islands, they were spotted by other steam vessels. Commander Weddigen gave John Williams a chart of the Scillies and warned him that if these were not tugboats, he would have to leave the crew of the Indian City to their own devices.

These vessels were in fact patrol boats and seeing the U-boat they opened fire.  According to John Williams, their shots passed close over the crew of the Indian City but fell short of the U-29.

Two other ships were attacked by U-29 on the same day. A full report was submitted by C. L. Divine, the Master of one of the patrol ships, HM Trawler Lois.  Having been alerted that a submarine was in the vicinity by the Coast Guard at St Mary’s, he went to investigate with HM Trawler Ulysses.   When they arrived at the scene, Ulysses took Indian City’s two life boats in tow and Lois opened fire on the submarine, but the shells fell short.  Later, these ships tried to salvage SS Indian City but were unable to get her under tow.  Instead Ulysses returned to warn shipping of her presence.

U-29 attacked SS Headlands at 10.25.  The Master of Headlands, Herbert Lugg, had tried to outrun the submarine for an hour before the ship was torpedoed and was commended for his action.  Just before the crew abandoned ship with 5 minutes to spare, Herbert Lugg took a photograph of U-29, which he later made public.  SS Headlands sank 7 hours later. 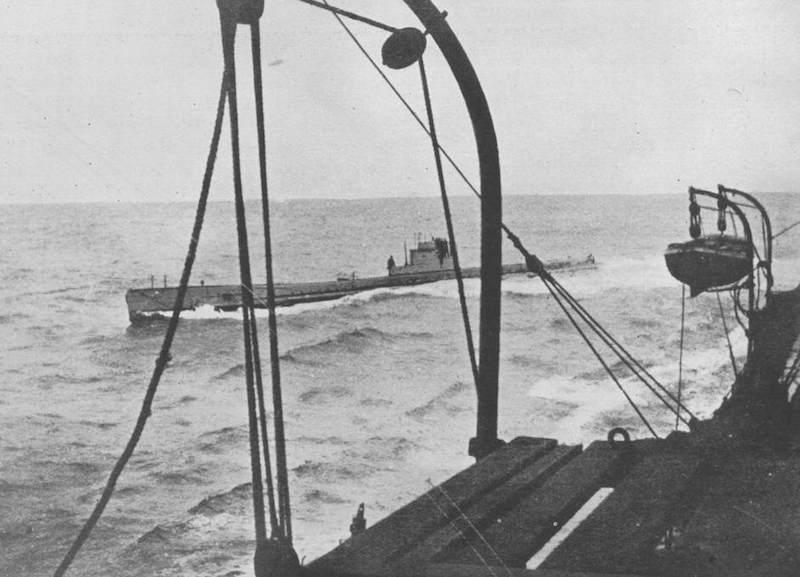 A picture of U-29, taken by the Master of SS Headlands

SS Andalusian was spotted by U-29 at 12.00.  After trying to outrun the submarine, the Master finally acknowledged defeat and abandoned ship at 12.40.  Instead of torpedoing the vessel, the submarine crew took the Chief Engineer back to the ship and made him scupper the ship by opening the main injection valve before returning him to the life boats.

C.L. Divine ordered that once they were on shore, none of the crews were to speak about the submarine nor what had happened to their ships.  In his report, he noted the information that John Williams had gathered on his visit to U-29. But the Admiralty were far less impressed by John Williams’ report of the incident and criticised him for fraternising with the enemy.

By the end of March 2015, the Admiralty was beginning to recognise the financial cost of the losses from boats being attacked and allowed to sink.  An official statement, dated 31st March 1915, cited the attacks on SS Indian City, SS Headlands and SS Andalusian to illustrate their point.  They noted that even if a ship had been torpedoed it might not sink immediately and that in some cases, where help might be able to reach it in time because it was close to land for example, there was a possibility that the vessel might be salvaged.

Despite the havoc U-29 caused on 12th March 1915, its operational activity would be short-lived.  It was sunk with all hands only a week later on 18th March 1915 in Pentland Firth, when it was rammed by HMS Dreadnought.