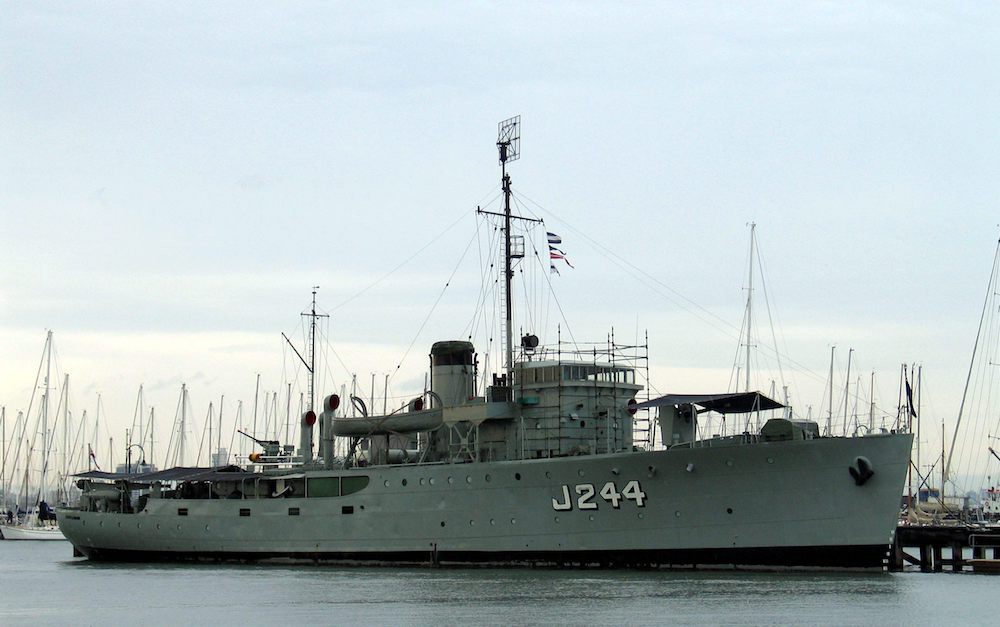 HMAS Castlemaine was one of sixty minesweeper/corvettes of the Bathurst class built during World War II in Australian shipyards as part of the Commonwealth Government’s wartime shipbuilding programme of which fifty-six were for the Royal Australian Navy.

She was constructed at the Williamstown Dockyard during 1941-42 and her operational service during World War II consisted of convoy escort duties, mine clearance duties, survey duties, ferrying duties and supplying of troops; all in the Pacific war zone.

Castlemaine was involved in a number of actions during the war. One involved the relief of a guerrilla force operating on Timor. The force of three ships were located and attacked by Japanese aircraft. HMAS Armidale, a sister ship was sunk and 100 lives were lost.

Castlemaine‘s last wartime deployment was mine clearance operations at Hong Kong. Castlemaine returned to Australia and paid off at Melbourne in December 1945, having steamed 216,000 kilometres (117,000 miles) on war service. The ship was then laid up.

Post-war she was employed at HMAS Cerberus naval base at Flinders, Victoria as an immobilised training vessel for engine room artificers and for damage control training.

In 1973 the ship was gifted to the Maritime Trust of Australia Inc, for preservation as a museum ship. At this stage HMAS Castlemaine was little more than a stripped hulk. The ship was towed back to Melbourne in 1974 when restoration commenced and two years later she was berthed at Gem Pier Williamstown, close to her place of construction. She has now been returned to her 1945 configuration and she is an important part of Australia’s maritime heritage.