She saw action alongside Nelson and was captained by Jane Austen’s brother to win renown in some of the key battles of the 18th century.

On Thursday, the nation will be able to see the remains of HMS Namur for the first time in 180 years, after her centuries-old timbers were discovered under floorboards.

The timbers are the centrepiece of a new exhibition at the Historic Dockyard Chatham, 20 years after they were first exposed during a routine refurbishment.

They will be left in situ at the dockyard’s Wheelwrights’ Shop, where they had been hidden under several layers of flooring after HMS Namur was  decommissioned and recycled in 1833 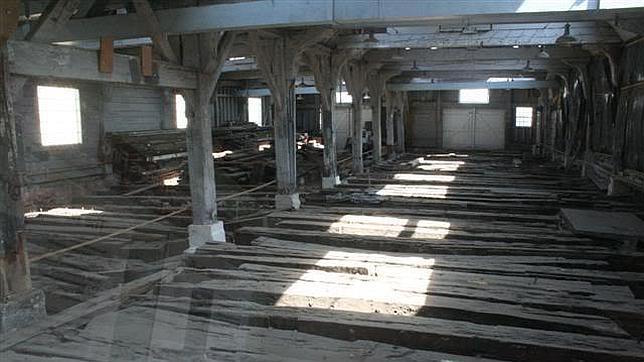 Dan Snow, the historian and broadcaster, said the ship defined its period, adding that the remains were crucial in understanding how Britain’s navy had dominated the world.

Though the ship is not a household name, HMS Namur’s battle honours surpass even those of the more famous HMS Victory.

In 47 years of service, she saw action in three major wars, including the Seven Years’ War and Napoleonic Wars, and nine fleet actions.

The Namur was one of the first generation of warships to be built with a copper bottom, to reduce the growth of marine life on the hull. The phrase eventually entered the English language to signify solidity and security.

Among her notable captains was Charles Austen, the younger brother of author Jane, who commanded her from 1811 to 1814. His experience made its way into Austen’s novels via naval characters in Mansfield Park and Persuasion.

Charles, or more formally Sir Charles John Austen, would rise to the rank of rear admiral in the Royal Navy.  He had many commands but served as captain of HMS Namur when she was stationed at the Nore Anchorage off Sheerness as flagship of Sir Thomas Williams. (Charles was not Jane’s only naval brother. Her elder brother, Sir Francis William Austen, rose to the rank of Admiral of the Fleet in his long career.)

Olaudah Equiano, a prominent campaigner for the abolition of the slave trade, was also a member of the Namur's crew, working in the dangerous role of “powder monkey” – boys who carried powder for the ship’s guns – in 1759.  When the ship was decommissioned, she was broken up and repurposed.

Around a quarter of the timbers were used to line the floor of the wheelwrights’ shop, later covered with layers of real floorboards. 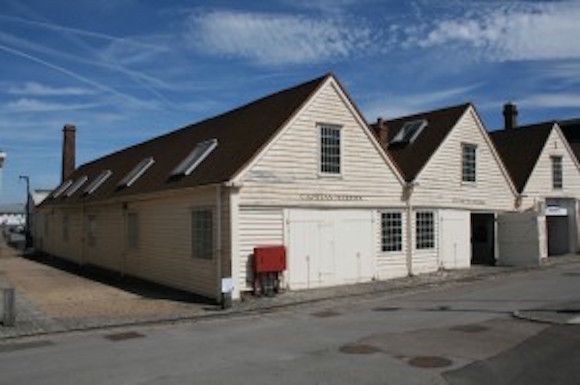 The Wheelwrights' Shop above

After more than 200 years they were finally rediscovered in 1995. Careful investigation over the past two decades showed the 245 timbers still bored their race marks, special cuts made with a knife showing where and when the timber was sourced, and where each piece fitted into the ship.

The remains will form the centrepiece of Chatham’s exhibition Command of the Oceans from Thursday May 26th.

Namur's exploits were legendary
The discovery of the Namur, writes Richard Holdsworth, has provided new and unexpected insights into the role of Chatham Dockyard during the age of sail and into the contribution made by Chatham-built ships to the making of the world we live in today.

To the navy of the day her exploits were legendary. Today she is little known, overshadowed by two later ships – Victory, Nelson’s flagship at Trafalgar, and Temeraire, immortalised by J M W Turner.

Namur embodies the story of the Royal Navy’s timber-hulled, sail-powered ships of the line as they secured command of the world’s oceans and protected trade – events that led to 150 years of Pax Britannica and Britain’s global influence today.

Launched in 1756, Namur was Boscawen’s flagship for the assault on Fort Louisburg in 1758. She fought in the two great naval victories of 1759: the Battle of Lagos Bay and Battle of Quiberon Bay.
She led the fleet that seized Havana, Spain’s Caribbean fortress, in 1762. During the American War of Independence she fought at the Battle of the Saintes.
In 1797 she was second in line to Nelson’s ship, Captain, at the Battle of Cape St Vincent, and in November 1805 took the surrender of Formidable, flagship of Admiral Pierre Dumanoir Le Pelley at Trafalgar.

Today her archaeological remains provide unique insights into warship construction. The timbers have not suffered the levels of degradation found on those beneath the sea.

They shed light on the working practices of the shipwrights at Chatham, on the process known as “razeing” – reducing an older three-deck ship of the line to a two-deck ship – and on the development of the round bow – a response to Nelson’s battle tactic of “cutting the line”.