BRITAIN’S most celebrated warship needs 136 metal props fitted to stop it slowly collapsing under its own weight like a “squashed football”, a hi-tech structural survey has found.

HMS Victory’s deck is sinking towards the keel by a fifth of an inch (0.5cm) each year, while the warship’s sides are bulging out. Two years of measurements have found Nelson’s flagship at Trafalgar is also falling backwards, away from the bowsprit and water is getting into the hull. 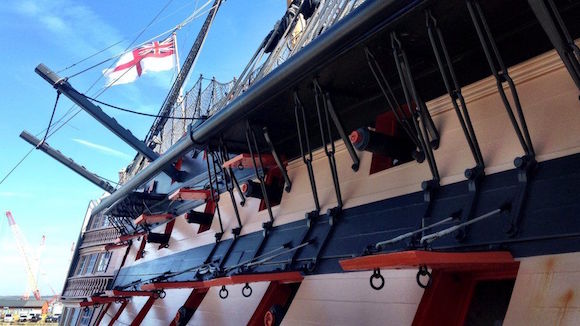 Metal struts will now be inserted to hold the 251-year-old ship up at Portsmouth Historic Dockyard as part of a multi-million-pound project to stabilise the structure. Once the sagging has been halted, work will start on a £35 million conservation project expected to last 12 years.

Andrew Baines, head of historic ships at the National Museum of the Royal Navy, said: “For the past 40 odd years, the ship has been slowly moving.
“The upper deck has been getting close to the keel at a rate that stands at around half a centimetre a year and as the upper deck moves down, the ship’s sides bulge out like squashing down on a football.
“The whole ship herself is falling very, very slowly backwards away from the bowsprit, the front end of the ship. ‘Half a centimetre doesn’t seem a lot, but when it’s been going on 40 years and is accelerating, it’s a concern’" Eventually it will get to a point when that’s unsustainable. No one is sure if that’s next Tuesday or in 100 years.”

The National Museum of the Royal Navy took custody of the warship in 2012 and using laser scanning has built up a detailed picture of the ship from 89 billion measurements.

Mr Baines said: “We now have a structural model of Victory and from the model we have been able to understand what is causing the ship to move – to collapse, if you like.

“From that finding we know how to stop the problem and arrest the movement and that is where the 136 new struts come in. Once we have got her stabilised, the conservation programme is going to take us about 12 years and cost £35 million.

“The most important thing is to work on the ship’s structure to stop water getting in, stop the rot and stop us losing any more really valuable historical material in the ship.” 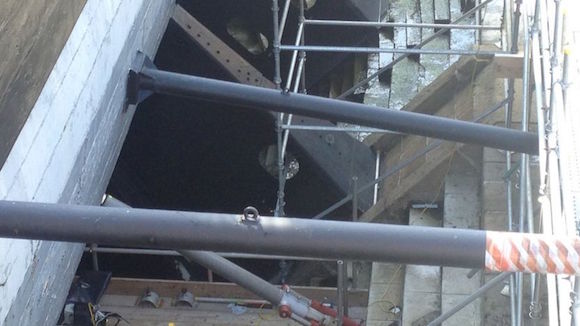 Metal supports are being installed in HMS Victory's drydock

Once the structure has been shored up, the main masts, which were removed in 2011, will be replaced.

Mr Baines said: “The masts will be going back up but there is 25 tons of weight on each mast and the lower masts have been out since 1893. We have got to stop her moving then work on how we support the base of the masts to make sure they are safe.”

HMS Victory was expected to last about nine years after she was first floated in 1765.

An estimated 25 million visitors have walked her decks since she entered dry dock in 1922. The Gosling Foundation gave £25 million for the preservation of the ship in 2012, with the donation matched by another £25 million from the Ministry of Defence.