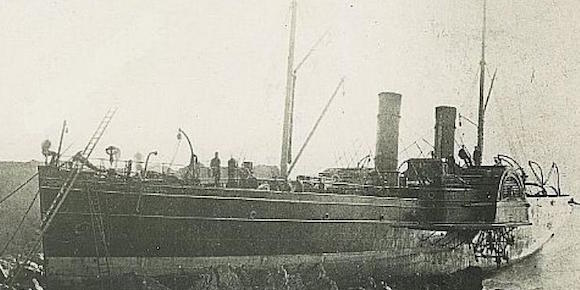 A sonar image as crisp as an etching aided divers who worked in poor visibility on a North Carolina shipwreck believed to be a Civil War blockade runner.
"We are adept at groping and feeling along and measuring stuff that way, said underwater archaeologist Billy Ray Morris, who monitored the divers from a boat.
So far, historical accounts, the sonar image and work by the divers strongly support the working hypothesis that the iron-hulled steamer is the remains of Confederate blockade runner Agnes E. Fry, Morris said on Thursday.
"Everything we have seen ... all of it points to her being the Fry," he said.
State officials early this week announced the discovery of the vessel.
Daring blockade runners usually made it through Union naval blockades meant to prevent them from bringing vital war goods to Southern ports.
The Agnes E. Fry had a few successful runs before it ran aground below Wilmington in the closing months of the conflict.
The wreck was found February 27 during a sonar sweep 400 yards off the beach near Oak Island, said Morris, director of the state's Underwater Archaeology Branch.

Morris said the crew dropped buoys before divers made their way to one of the ship's boilers. It was the same type that would have been built in Glasgow, Scotland, in 1864, officials said.

The project has corroborated accounts that the engines and paddle wheel shaft were removed during salvage operations in the 1880, Morris said.

Although researchers are not yet certain of the identity, "confidence is high" that it is the Agnes E. Fry. Morris is checking with the University of Glasgow to see whether it has plans for the swift vessel.

He would like to get sonar on the ocean floor to provide a 360-degree scan. "It will give me an acoustic image of the profile of the wreck."
It was all about stealth

Blockade runners were the epitome of maritime stealth technology of the day. "They were the equivalent of a cigarette boat. They were wickedly fast," said Morris. "They had the most sophisticated engines that England could put out."

Historians and scientists have known that three blockade runners ran aground in the area, but conditions in recent years have caused small and large portions of wrecks to emerge from the sand, in this case about 18 to 20 feet below the Atlantic Ocean's surface.

The Agnes E. Fry, Spunkie and Georgianna McCaw went down within proximity of each other. Morris earlier this week said the Fry is the "leading candidate," given it was closest in length to the wreck. About 225 feet of remains are exposed."It is the right location to be one of these three," said Morris, adding the other two ships are too small and of an earlier design than the Agnes E. Fry.

Officials said the largely intact wreck, about 27 miles downstream from Wilmington, near the mouth of the Cape Fear River, is the first Civil War-era vessel found in the area in decades.

"The preservation of this vessel is astounding," said Morris. "You can see that in the sonar image."

A very lucrative, but risky business
Blockade runners hit the waters early in the Civil War after President Abraham Lincoln declared the Union strategy aimed at thwarting Confederate imports or exports of cotton and other goods.

It was a lucrative business, given runners carried war materiel and consumer goods -- such as fine wines, dresses and household goods. "If you made one complete round trip, you paid for your ship," said Morris.

The Agnes E. Fry was built on the River Clyde in Scotland in 1864. Originally named the Fox, the blockade running company that bought the vessel renamed it in honor of the captain's wife.

Historical accounts show the Agnes E. Fry conducted business in Havana, Cuba, and possibly other neutral ports in Bermuda and the Bahamas. The Union navy did its best to intercept blockade runners, either far or near American shores

The vessels were generally unarmed and often were painted an unobtrusive pale gray so as to not garner too much attention on the seas.

The Agnes E. Fry and the other two runners were designed to get around the Union blockade of the vital port of Wilmington.

"Fortifications protected both entrances to the Cape Fear River from the Atlantic and were critical in keeping open a lifeline to the Confederacy until Fort Fisher fell in January 1865," the North Carolina Department of Natural and Cultural Resources said in a statement. The fall of Fort Fisher led to the fall of Wilmington and a critical railroad line, hastening the end of the Confederacy.

Morris said the Fry's small crew ran it aground near Fort Caswell rather than let it fall into enemy hands. Subsequent salvaging removed the engines, paddle wheels and other parts for scrap.

Vessel was "state of the art"

Scientists used records and a predictive model to narrow the search. The work has been partially funded by the National Park Service's American Battlefield Protection Program, and assisted by the Institute for International Maritime Research.
"These wrecks cover and uncover. Right now, we are in an uncover phase," said Morris, adding the wreck pokes 6 to 8 feet above sand and extends about that much below.
Officials say there are 27 wrecks -- some of Union ships, others of Confederate -- associated with the Wilmington-Fort Fisher campaign. Eight have not been located.

The archaeologist said people are welcome to check out the area.
"I just ask them to be good stewards of shared heritage. It is against the law to take stuff off of it, but it is not against the law to look at it."
It's possible some cargo remains in the shipwreck, but Morris doesn't know what was carried on this doomed trip.
His priority is to positively identify the ship. Artifacts or parts of the vessel would be brought up only to answer questions. He thinks more research will tell historians more about the ship's technology. "She would have been a state of the art blockade runner."