What happened to TNT Express ?

Some ships have more interesting careers and survive longer than others, some thanks to the might of the US Military.

And so it was for the conbulker TNT EXPRESS, the UK-owned, Australian-crewed contribution to Tsvi Rosenfeld’s ABC Containerline’s 7-ship Round The World service carrying base cargoes of mineral sands from West Australia to Mississippi, topping off with containers fm Aust-NZ to USEC-UK-Cont and returning with boxes via Suez to WAust.

As CAPT. STEVEN L. BENNETT and at the ripe old age of 31 years she has recently been sold by Sealift Inc. to Alang breakers for a relatively healthy $292 per LDT = USD3.84M lumpsum

ABC Containerline NV of Belgium collapsed exactly 20 years ago over Easter 1996, leaving debts of some $165 million. The biggest creditor was the Belgium government, which provided ABC Containerlines with shipbuilding credits of 4 billion francs ($130million). At that time TNT EXPRESS was trading as MARTHA II having been purchased by ABC from TNT in March 1991 ABC bought out TNT’s shareholding. On 14 Feb 1996 Martha II was arrested in Melbourne by Norway’s Den Norske Bank because of overdue mortgage payments. Cargo on the MARTHA II was transferred to the Cornelis Verolme which itself was then arrested in New Zealand at the request of shippers who have suffered financial losses because of late deliveries.

In July 1996 MARTHA II was sold at auction to the Den Norske Bank and renamed SEA PRIDE. On 21 May 1997 Military Sealift Command awarded a time-charter contract in the amount of USD47 million to Sealift Inc. of Oyster bay, N.Y for the 59 month charter of SEA PRIDE.  In June 1997 ownership of SEA PRIDE transferred to Sealift Incorporated USA, cargo cranes were installed,  and on 20 Nov’97 the ship was given the name CAPT. STEVEN L. BENNETT after a decorated US Air Force pilot who died whilst flying in Vietnam.

As CAPT. STEVEN L. BENNETT the former TNT EXPRESS was designated a Logistics Prepositioning Ship sponsored by the US Air Force.  “BENNETT” began its Air Force Prepositioning program career in the Mediterranean with a mission to “support the prepositioning requirements of the Dept. of Defence by transporting U.S. Air Force ammunition.”. During the next 14 years “BENNETT” supported the various peace keeping missions and theatres of war in which the U.S. and its allies were involved e.g. Kosovo, Operation Enduring Freedom, Operation Iraqi Freedom and the Global War on Terrorism. Much time was spent at anchor in the lagoon at Diego Garcia.

Carrying sensitive electronic cargoes in harsh environments for potentially years at a time required advance environmental controls. The most obvious was a white fabric shell that covered the ship from holds 3-9. This climate controlled cocoon enabled the ship to carry approx 50% more cargo protected from the marine environment. In addition to the cocoon “BENNETT” employed Tidal Engineering Corporation’s Control and Monitoring System (TECMS) which monitors and controls the cargo refrigeration and dehumidification controls (see below ). 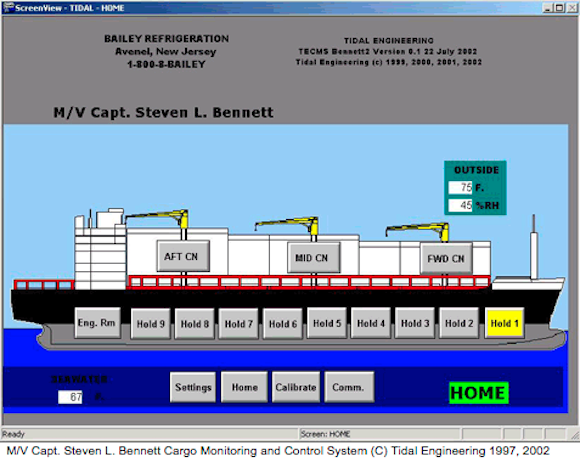 The cocoon was removed when the MSC charters finally ended in Oct 2012 and from then until the time of her sale for demolition she has been employed by Sealift in various commercial trades.

The cocoon was removed when the MSC charters finally ended in Oct 2012 and from then until the time of her sale for demolition she has been employed by Sealift in various commercial trades.