It was peacetime when the USS Conestoga departed from California's Golden Gate strait on March 25, 1921, but in one of the biggest maritime mysteries the vessel disappeared without a trace.

The Navy seagoing tugboat and its 56 officers and crew went missing so long ago that the famous bridge that spans the Golden Gate did not yet exist.

On Wednesday -- nearly 95 years after the Navy declared the Conestoga and its crew lost -- the shipwreck's discovery was officially announced by the National Oceanic and Atmospheric Administration and the Navy.

The wreck was first discovered in 2009 in the Greater Farallones National Marine Sanctuary about 20 miles west of San Francisco, and an investigation initiated in 2014 confirmed that the wreckage was the missing Navy vessel.

"After nearly a century of ambiguity and a profound sense of loss, the Conestoga's disappearance no longer is a mystery," NOAA Deputy Administrator Manson Brown said in a news release.

The Conestoga departed Golden Gate en route to American Samoa via Pearl Harbor, but never arrived in Hawaii. A massive air and sea search followed, but was called off by June 30, 1921, according to NOAA.

A NOAA team was doing a hydrographic survey in 2009 when it discovered what looked like an uncharted shipwreck. 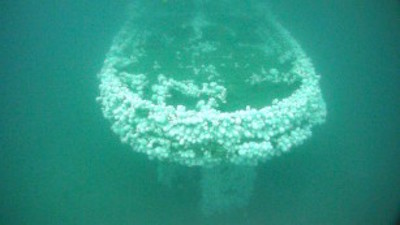 In September 2009, a NOAA/Fugro multibeam sonar survey of the area around Farallon Islands documented a probable shipwreck with an estimated length of 170 ft at a depth of 185 ft.

The agency, together with Navy experts, confirmed the wreckage belongs to the Conestoga and made the formal announcement.
"We hope that this discovery brings the families of its lost crew some measure of closure and we look forward to working with the Navy to protect this historic shipwreck and honor the crew who paid the ultimate price for their service to the country." Brown said.

NOAA and the Navy's investigation hypothesizes that the tugboat, possibly towing a barge, ran into a storm on its way from California to Hawaii.

The investigators believe that the vessel tried to reach a protected cove on Southeast Farallon Island, but didn't make it.

"This would have been a desperate act, as the approach is difficult and the area was the setting for five shipwrecks between 1858 and 1907," according to NOAA's report. "However, as Conestoga was in trouble and filling with water, it seemingly was the only choice to make."