The recent article on the Company’s website with reference to the Burrell Family titled , William Burrell-The Ships That Built An Art Collection was a reminder  of the significant influence the family had on the formation of the Commonwealth Line of Steamers that was set up by Prime Minister Billy Hughes during WW1 in 1916 .

Burrell and Son of Glasgow had been involved in tramp ship owning having commenced ship by owning a half share in a ship in 1866.

The Scottish connection was emphasized with naming of their ships with the prefix ‘Strath’ with their first ship the   Strathclyde of 1871. The Company with elder brother George looking after the operational side, whilst William looked after the financial side ,surprised the shipping world in the lead up to WW1 placing  orders for 34 general cargo ships to be built in two Clyde River yards . They were of a basic three island design, 7,150 tons deadweight and fitted with coal burning triple expansion steam engines giving trial speeds of 12.5 knots which over the years was reduced down to 9 knots .Ship owners from all over the Britain took notice as the price for new buildings had gone into a slump and the action of the canny Scots was copied by many others with new building orders.

Many of Burrell’s ships  manned by British officers and Lascar crews visited Australia in the course of their tramping trades.

With the commencement of WW1 Australia as a trading nation was deprived of ships due to the concentration of the war in Europe. Then Australian Prime Minister, Billy Hughes had dusted off a previous 1906 proposal to form a state owned shipping line which had been shelved previously due to the opposition of the established British shipping lines that traded to Australia. With a number of ships of the Axis countries captured in Australian ports in 1914 the opportunity due to war time exigencies and the reluctance/opposition of the established British lines to provide extra ships to cover the export of cargo mainly wheat to Europe made it necessary to obtain ships from any available source and as a consequence the Commonwealth Government Line of Steamers (CGLS) was formed. The British Government had bought and paid for the Australian wool and wheat crop and had assumed control of shipping but they did not have the power to direct ship owners, who had formed a combine, to divert ships to the long distant uneconomic routes. Ships previously engaged on the Australian cargo routes which had the total capacity of 252,000dwt had been withdrawn. These ships had been diverted to the shorter and more profitable trans-Atlantic trades although in some part as a result of U-boat action.

Billy Hughes had been installed as Prime Minister on 27 October 1915 and found himself in the position with a years wheat crop in temporary storage and a new crop about to be harvested. He decided to go to England and break the deadlock  and  arrived  in Liverpool  7 March 1916. Discussions with the British Government saw him receive a negative reaction from first Prime Minister Asquith who passed him onto Mr. Runciman one of the leading ship owners in the British parliament. Hughes was advised his mission was an impossibility. He was then directed to Sir Joseph MacLay (another ship owner), Director of Shipping who in turn referred him to the  Shipping Committee of shipping experts composed entirely of ship owners who gave him  a quick negative reply.

Meanwhile Hughes had preempted the negative reception and had in strict confidence and total secrecy instructed the firm of Turner, Davidson and Co. Ltd. to proceed with the purchase of up to 25 suitable ships .When the Shipping Committee found out what he was up to, ten of the ships  the  sale of which had not been finalized  were immediately cancelled by their owners who were under the impression the ships were being purchased for  members  of the shipping combine. However 15 ships were purchased the sale of which had been completed by Hughes in June 1916 and were unable to be stopped

These included ten from Burrell and Son which Hughes as Prime Minister purchased personally and without reference to the Australian Parliament acquired at a premium price of £145,000 each, which compared with the building price averaging £40,000 each, some 7 to 10 years previously. This resulted in a handsome profit for Burrells! The ships were all renamed with the prefix’ Austral’. Nine Burrell ships were also sold to other owners the same year making a total of 19 all sold at a premium price. A further five British ships were purchased by Hughes at the same time and from different British owners. 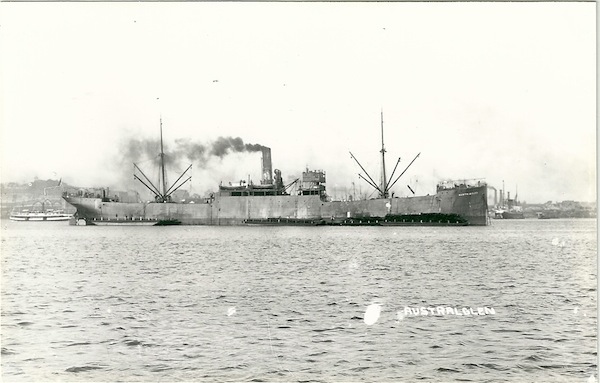 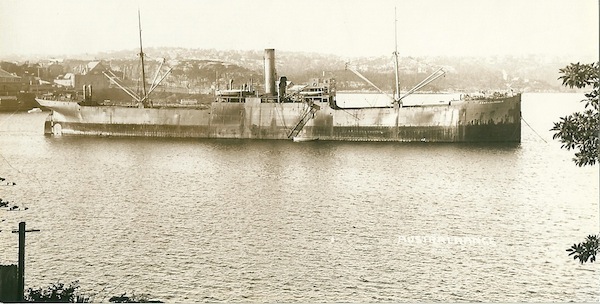 Being canny Scots and sensing a bargain the Burrell brothers were no doubt very happy with their sale partly due to the fortunes of war and their previous ability to chance your arm. It paid dividends and definitely upset the English shipowners south of the border.

Despite their Australian registry the ships employed mainly British crews who enjoyed better conditions and victualing serving under Australian articles.

Meanwhile the parliamentarian and influential ship owner Mr. Runciman threatened to confiscate the 15 ships as soon as they arrived in British ports.  Fortunately in this matter he was unable to get his Prime Ministers’ support! At the meeting that followed soon after between the two Prime Ministers, Hughes was advised by Asquith that he could retain the 15 ships after the latter received an assurance that there would be no more similar transactions. Hughes (born in Pimlico, London but educated in Wales) during his short stay in England received the freedom of seven major cities and was feted around the country by the British public who obviously appreciated a ‘man of action’. The public even signed petitions imploring Hughes to remain in Britain and take his place in the War Cabinet.

Billy Hughes then went over to the Western Front where he ignored ‘red tape’ and officialdom and earned the nick name ‘The Little Digger’. He had the ability to seek the opinions of all from Privates through the ranks to Generals. He then proceeded home prior to the arrival of his first ship having registered the Commonwealth Government Line of Steamers before he left London. The first memo giving full details of the operations of the Commonwealth Line of Steamers was dated at Melbourne 25 September 1916

The now Sir William Burrell (knighted in 1927 the same year his brother George died) had no emotional attachment to ships and wasn’t afraid to sell them off. He considered commercial shipping a cut throat business and at the end of WW1 his fleet had been reduced to just two ships with the Strathlorne  soldiered on alone  before finally being disposed of just prior to the great  depression in 1930.The firm continued in business till 1939 when it closed with the retirement of Sir William and as a result of no son or heir to take over the reins. Sir William was particularly annoyed that P&O without consulting him adopted his ‘Strath’ prefix for the five new liners introduced in the early 1930’s. Perhaps a deliberate   pay back from a major player in  the Shipping Committee resulting from the 1916 sale by Burrell to the CGLS and its considered  ‘upstart’ founder ?.

It is noteworthy  that when the CGLS was finally put up for sale in 1928 by then Lord Runciman of Doxford was one of the three bidders for the  purchase of the five ‘Bay’ boats and the two ‘Dales’ which comprised the remaining  fleet . The successful bidder was Lord Kylsant who crashed spectacularly a few years later and was jailed. These six ships with the exception of Ferndale which was wrecked on its delivery voyage in 1928 eventually found their way into the fleet of Shaw Savill and Albion (SSA). Interestingly Lord Runciman of Doxford wrote the forward to the 1939 authorised history of SSA.

Meanwhile Sir William Burrell having exited the shipping industry was able to concentrate on his love of fine arts which in his case he had commenced collecting as a boy. It comprised art from ancient to modern times, pottery, metalwork, carpets and tapestry, furniture and eventually an extensive painting collection all of which geographically extended in coverage from Europe to the Far East. His dream of a museum to house his total collection, for which he had provided a generous donation was finally opened in 1983 in a rural setting outside of Glasgow. One of his stipulations for the museum was that it had to be in a rural setting far removed from the smog of industrial Glasgow which would affect the longevity of the collection.

The Scottish Burrell family certainly assisted Australia in its efforts to help move the cargoes in a time of need and in repayment the nation helped to fund the Burrell Collection.

It is interesting  to look back in history especially with the 100th Anniversary of the ‘Great War’ WW1 currently underway and to observe  the selfish and mean spirited  treatment  by  British ship owners towards the fledgling nation of Australia . In the light of history to deliberately   attempt to deny assistance in Australia’s  endeavour  to export its produce for the mutual benefit of both the Australian public  and the British populace is galling in the extreme. This attitude especially reflected badly in view of young Australians volunteers giving their lives at the same time on the battle fields of Gallipoli and the Western Front.