One of two British explorer ships that vanished in the Arctic more than 160 years ago has been found, Canada's prime minister says.

Stephen Harper said it was unclear which ship had been found, but photo evidence confirmed it was one of them.

Sir John Franklin led the two ships and 129 men in 1845 to chart the Northwest Passage in the Canadian Arctic.

The expedition's disappearance shortly after became one of the great mysteries of the age of Victorian exploration.

The Canadian government began searching for Franklin's ships in 2008 as part of a strategy to assert Canada's sovereignty over the Northwest Passage, which has recently become accessible to shipping because of melting Arctic ice.

Expedition sonar images from the waters of Victoria Strait, just off King William Island, clearly show the wreckage of a ship on the ocean floor.

"I am delighted to announce that this year's Victoria Strait expedition has solved one of Canada's greatest mysteries, with the discovery of one of the two ships belonging to the Franklin Expedition," Prime Minister Stephen Harper said in a statement. "Finding the first vessel will no doubt provide the momentum - or wind in our sails - necessary to locate its sister ship and find out even more about what happened to the Franklin Expedition's crew." 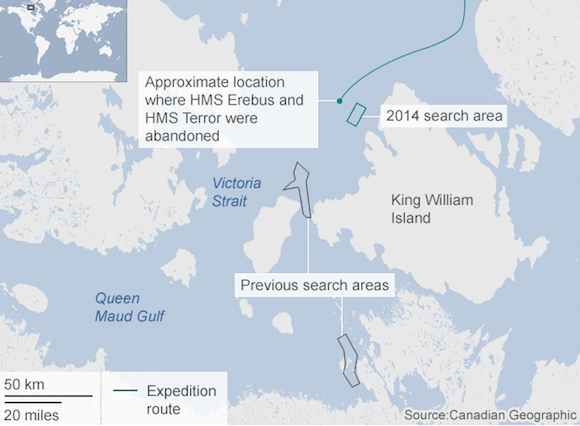 The find has been described as "the biggest archaeological discovery the world has seen since the opening of Tutankhamun's tomb almost 100 years ago" by a British archaeologist, William Battersby, who has written extensively about the Franklin expedition.

"From the images it is clear that a huge amount of evidence will be preserved from the expedition, possibly even including the remains of the men and maybe, just possibly, some of their photographs," he said.

The loss of HMS Erebus and HMS Terror, which was built in Topsham, Devon, prompted one of largest searches in history, running from 1848 to 1859.

The mystery has gripped people for generations, in part because no one knows for sure exactly what happened to the crew.

Experts believe the ships were lost when they became locked in the ice near King William Island and that the crews abandoned them in a hopeless bid to reach safety. Reports at the time from local Inuits say the men, desperate for food, resorted to cannibalism before they died.

Sir John Franklin's wife spearheaded an attempt to find him, launching five ships in search of her husband and even leaving cans of food on the ice in the desperate hope he would find them.

In total more than 50 expeditions joined the search.

Three bodies discovered over a century later in the 1980s were found to have a high lead content and to this day, many people believe the 129 crew members were poisoned by leaking lead in their poorly soldered tin cans.

More recent research suggests the canned food supplied to Franklin was not acidic enough for that to happen and the lead was more likely to have come from the internal pipe system on the ships.

The search resulted in the discovery of the Northwest Passage, which runs from the Atlantic to the Pacific through the Arctic archipelago.

The discovery of Franklin's vessels is considered one of the most sought-after prizes in marine archaeology.

A team of Canadian divers and archaeologists has been trying to find the ships since 2008.