One of the most endearing features of the United States Navy is its reluctance ever to throw anything away. It is an example to other navies, which often cannot wait to send ships with years of life still in them to the scrapyard. In the US they are carefully stored, anchored in creeks around the seaboard, just in case they are needed

. Then, when it is reluctantly concluded that these old ladies are really beyond any productive life, some perceptive person realises that they are historic treasures, and offers them to kindly new owners to use them as museum artefacts. Thus, just about all the last battleships have found new homes, even the odd aircraft carrier, while a number of surface combatants and submarines are local cultural treasures in port towns and cities. It is something to be commended, if you like ships.

I am indebted to the excellent newsletter of Dennis Bryant, for an alert that the world’s first purpose-built deep-sea ro-ro, the ex USNS Comet is available for donation, seeking a loving home and is eligible for listing on the National Register of Historic Places. Designed by George C Sharp, who also had the nuclear merchant ship Savannah to his credit, Comet was completed by Sun Shipbuilding in 1958 as a Vehicle Cargo Ship, with a stern ramp and large sideports in the hull. She could carry 700 vehicles and load and discharge them at amazing speed, compared with the far more pedestrian lift-off/on technology then practised. 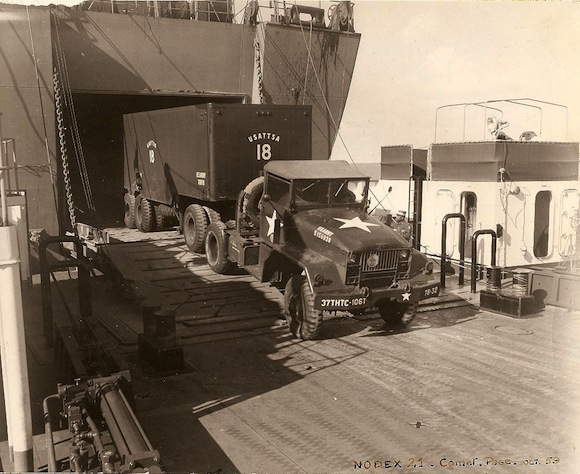 The USN thought highly of its revolutionary ship and wanted more of them, with the first seeds of the maritime prepositioning force germinating in someone’s mind, but funds were not forthcoming and only a single improved sister was constructed ten years later. By then, of course, the civilians had taken over, big, deep sea Scandinavian ro-ros were on the drawing board and the little Comet was no longer the star she had first been.

The DoD eventually got its ro-ro fleet for Military Sealift Command and the prepositioning fleet, but only as a result of the quadrupling of oil prices in the 70s and large numbers of big fast ro-ros, along with the thirsty Sea-Land express container ships, becoming available for conversion. But Comet is important, not least for breaking all sorts of taboos about making holes in the hull and showing the way. A useful collaboration between National-US Radiator Co. and the cargo-handling specialist MacGregor designed the vehicle ramps, internal doors and sideports which were subsequently seized upon with enthusiasm by ferry folk everywhere.

She remains quietly moored with fellow members of the Reserve Fleet at Suisun Bay, California. Maybe she will get a new home and a bit of deserved affection.