William Burrell: The ships that bought an art collection

Sir William Burrell is celebrated as an art lover and philanthropist. 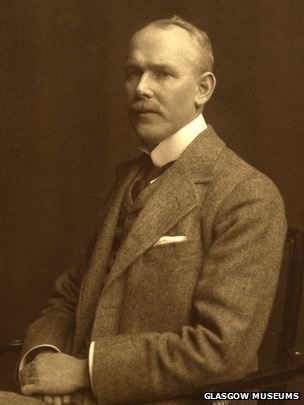 He left a wealth of objects to the people of Scotland in the magnificent Burrell Collection.

But it was not a passion for art that first brought him fame. One hundred years ago he was known across the globe as a shipping merchant.

What was the key to Burrell's business success, that created one of the world's most remarkable art collections?
"It was often said he was ruthless, but that's not the right word," says maritime historian Martin Bellamy, Head of Research at Glasgow Museums. "He was an innovative business operator with an inspired commercial mind.

Tramp Shipping
"He was a typical Victorian entrepreneur. He exploited the world of opportunities that the British Empire created.
"Burrell took over a modestly successful family business and expanded it enormously."
Burrell's secret was his ground-breaking operation of a type of trade called 'tramp shipping'.
Unlike liners which followed a set route of destinations, tramp ships did not have scheduled deliveries. They sailed to whatever port their cargo took them.
While a ship was unloading, the captain would make arrangements to find the next job. This led to delays and meant ships often sailed only part full. But Burrell had a solution.
"He travelled the world and set up a network of agents," says Bellamy. "They would do the work of the captains and secure the next cargo before his ships arrived.

Family prosperity
"Usually tramp ships had to rely on the skill of the captain to secure cargo, and the trading opportunities available in each port. Burrell had found a far more efficient way to operate."
Burrell had developed his business from an early age. In 1876, at 15 years old, he joined Burrell & Son, the Glasgow shipping firm set up by his grandfather.
As a teenager Burrell had already found his interest in art, buying his first painting with savings that his father thought would be better spent on a cricket bat.
In later life he admitted that most of the value of his early art purchases "lay in the frames".

Burrell & Son prospered in the industrial growth of the 19th Century, moving from small canal vessels to ocean-going steamers.
At the time Glasgow was at the heart of Britain's shipbuilding and engineering industries, earning its reputation as the second city of the Empire.
Burrell and his elder brother George took over the firm in 1885. George handled engineering matters, while Burrell's focussed on the financial side. The company flourished under their control.

Burrell's global travels helped him pursue his passion for collecting art. He gathered around 9,000 objects in his lifetime from all over the world.
His collection includes paintings, sculptures, tapestries, ceramics and stained glass. It covers medieval and early Renaissance Europe, as well as important examples of Chinese and Islamic art.
He also loved the modern art of his day, buying paintings by James McNeill Whistler, Edouard Manet and Edgar Degas that are now worth a fortune
Burrell's shrewd investment in art reflected his business mind.

Eye for a bargain
"Commercial shipping was a cut-throat business," says Bellamy. "It was inevitable that Burrell would bring that sensibility to the art world.
"He was not afraid to take risks. Burrell was lucky, but he engineered his own luck. When prices were rock bottom he saw the opportunity to make money and took it.
"He didn't conform to the romantic stereotype of a ship owner. Burrell had no emotional attachment to his ships. He wasn't afraid to get rid of them."
Burrell proved this in 1894 when the market was in a slump. He bought 17 ships at a bargain price, then sold the entire fleet a few years later when the market recovered. 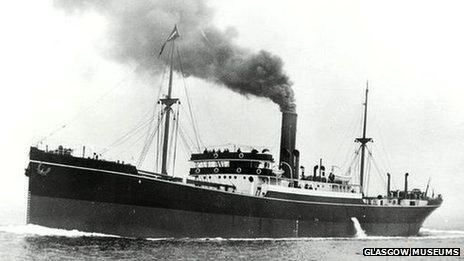 Burrell & Son was now one of world's biggest tramp shipping firms, known from the Caribbean to Mediterranean, to the Adriatic and Far East.

But during World War I, when demand for ships was at a peak, he again sold off the fleet for a handsome profit. With his wealth Burrell bought Hutton Castle in the Scottish borders in 1916.

When his brother died in 1927 the firm was left solely in Burrell's hands. He and his wife Constance had a daughter Marion, but no son to take over the family business.

The market did not hit another slump to allow Burrell to buy another bargain fleet, but by this time he had already made his fortune.

Now in his seventies, the business dwindled as he devoted more time to his art collection. Burrell & Son finally closed in 1939.
Burrell donated his artworks to the city of Glasgow in 1944, along with £250,000 to build a museum to house it.

One of his conditions required the art to be displayed in a rural setting away from the pollution of Glasgow.
He was concerned about his tapestries and carpets, and warned the Glasgow Herald newspaper that "if housed in an industrial city [they] would quickly deteriorate".

Burrell died in 1958 at the age of 96. He would never see his objects in their final home.

It took until 1983 for the right home to be found, when the Burrell Collection finally opened in Glasgow's Pollok Country Park.
Burrell's outstanding collection means he will forever be remembered as an art lover, but it would not have been possible without the achievements of Burrell the businessman.