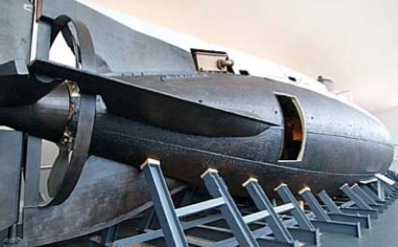 Launched as one five new subs, Holland’s blueprint, linked the internal combustion engine to the electric motor and battery, and meant submarines would become a crucial part of 20th century naval warfare. The Holland 1, meanwhile, met a less distinguished fate, sinking on its way to the scrapyard in October 1913 and resting at the bottom of the English Channel for 68 years.

Navy mine sweepers spotted and salvaged the wreck in 1981, helped by the expertise of the Royal Navy Submarine Museum, where the sub has been preserved and, in a display allowing visitors to recreate the footsteps of the eight crew members and three mice, put on public show.

“John Philip Holland is rightly known as the father of the submarine,” says Bob Mealings, the Submarine Museum curator who led the project to restore the vessel. “His designs incorporated the key technological features that would go on to form the basis of all submarine design right up until the nuclear age.
“However, John was not the only inventor of the era dreaming of navigating the depths.
“Other inventors were also at work designing – and in some cases building – submarines with varying degrees of success.” Holland’s design had its imperfections. Lieutenant Arnold Foster, the Royal Navy’s first submarine commander at the turn of the century, described the difficulties in driving it. “The ingenious designer in New York evidently did not realise that the average Naval Officer has only two eyes and two hands,” he rued. “The little conning tower was simply plastered with wheels, levers and gauges with which some superman was to fire torpedoes, dive and steer and do everything else at the same time.”

A century after the Naval and Military Record reported the “accident of the Eddystone” which doomed the first submarine but “happily was not attended by loss of life”, the museum is commemorating the feat of engineering. Mealings will give a talk, Submarine Inventors, at the museum as part of a season of fundraising evening talks in aid of the Saving HMS Alliance Appeal.