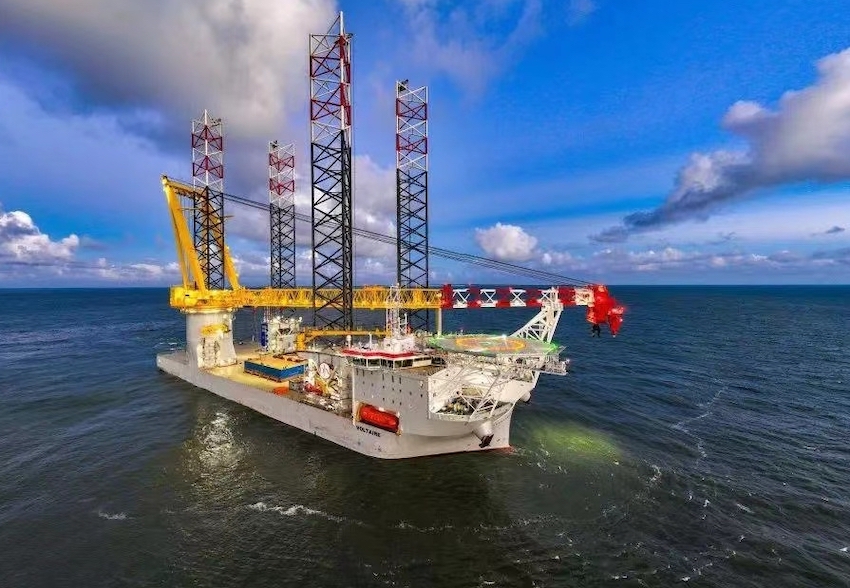 The world's first 3,200-ton self-elevating and self-propelled vessel designed for the installation of wind turbines was delivered and set sailing on Tuesday at a terminal in Qidong, East China’s Jiangsu Province, China Media Group reported.

According to the report, the vessel named N966 ordered by a client in Belgium has a main crane lifting capacity of over 3,200 tons, which is by far the largest lifting tonnage of the type of vessel.

Its maximum lifting height can reach 325 meters, with a maximum operating water depth of over 80 meters and a payload of over 16,000 tons.

After delivery, the vessel will go to the UK’s North Sea to serve an offshore wind farm that is now under construction.

As the world's first fourth-generation vessel for wind power installation, the N966 has the advantages of strong lifting capacity, good maneuver ability, large capacity and low energy consumption and emissions. It can install wind turbines, and it also can be used in oil- and gas-related industries.

Compared with the previous three generations of wind turbine installation vessels, the N966 can carry more turbines at one time, and it is faster and more efficient when installing and moving, so the vessel is the first choice for offshore wind power installation, experts noted.

“China is already at the forefront of the world in the field of new energy development and usage as it enjoys a complete industrial chain. The delivery of this vessel has also become a way for China to showcase the country’s new-energy technology to the world,” Lin Boqiang, director of the China Center for Energy Economics Research at Xiamen University, told the Global Times on Tuesday.

Lin noted that the world’s wind power industry is just starting, so China has a huge global market for wind power-related products.

According to data released by the National Energy Administration, by the end of November, China's cumulative installed wind power capacity was 350.96 million kilowatts, up 15.1 percent year-on-year.