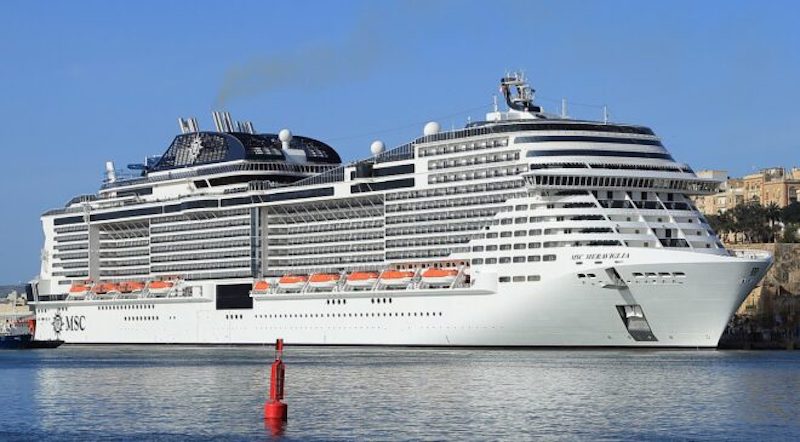 A 36 year-old woman went overboard from the MSC Meraviglia as the cruise ship was returning to Port Canaveral early this morning. News accounts indicate that she could not be rescued after she sustained “fatal injuries,” according to MSC Cruises.

The U.S. Coast Guard tweeted this morning: “A 36-year-old woman’s body was recovered from the water approximately 18 miles offshore Port Canaveral Thursday morning after she went overboard the cruise ship Meraviglia. The cause of the incident is under investigation.”

A passenger aboard the ship told local FOX 35 that “around 5 a.m. a female voice came over the loudspeaker saying ‘attention! Man overboard, Port side.’  A few minutes later, an emergency horn was blared and passengers were asked to stay in their rooms.”

MSC Cruises is one of the very few responsible cruise lines which have installed automatic man overboard (MOB) systems (on at least this ship). MOB systems immediately send a visual and audio signal which alerts the bridge that a person has gone over the rails so that the ship can promptly begin emergency rescue efforts. The technology utilizes video, motion detection and radar systems to record the person who goes overboard from the ship. It also detects and tracks the person in the water, even at night.

We have criticized MSC in the past because crew members and passengers have disappeared from MSC ships without this type of technology.
In 2017, we reported that MSC Cruises announced that it had installed a state-of-the-art man overboard system on the MSC Meraviglia and is planning to deploy similar systems across its fleet of cruise ships.

MSC Cruises indicated that it developed an “intelligent video capturing and analysis system” in collaboration with “security technology experts, Bosch and Hewlett Packard Enterprise.” The Swiss-based cruise line announced that it has tested the new man overboard system on the company’s newest ship which debuted in June (2017).  MSC reported that “through over 25,000 hours of video analysis, extensive software testing and continuous algorithmic updates, the system has now reached a confirmed accuracy level of 97%.”

The MOB data and images are analyzed by two separate and independent image processing systems which significantly lower false alerts. “Once the alarm is activated in case of an overboard, an acoustic signal and light will notify the ship’s security officer, in a central security room, who can immediately retrieve and review the images and data and immediately notify the bridge to begin rescue efforts,” according to  Seatrade Cruise News.”MSC Cruises announced MSC Meraviglia is fitted with an integrated video surveillance system to optimize security monitoring on board the ship and which will allow, among other features, for the speediest intervention in the unlikely event a person or object falls overboard.”
In July 2019, a cruise guest in her 40’s went overboard from the MSC Meraviglia but was promptly rescued after the auto MOB alerted the crew that she went overboard.

Unfortunately. MSC Cruises says (in a statement below per FOX13) that the woman in this latest overboard case sustained “fatal injuries,” apparently from the fall:
“Early this morning, MSC Meraviglia advanced detection systems alerted our crew to a passenger overboard while the ship was sailing to Port Canaveral. The crew performed an immediate search and rescue operation, alongside the US Coast Guard who supported search efforts with boats and a helicopter. Unfortunately, despite the rapid rescue operation, the passenger sustained fatal injuries. We are offering our full support to authorities as they investigate this matter.  We are deeply saddened by this incident and offer our sincerest condolences to the family and those affected.”

We are not aware whether MSC Cruises has installed similar MOB systems on other ships in its fleet. To our knowledge, Disney Cruises is the only other cruise line to invest in the MOB technology.

According to Cruise expert Dr. Ross Klein, 375 people have gone overboard in the last 25 years or so.  On November 24, a 28 year-old man went overboard from the Carnival Valor but was rescued over 21 hours later. Just yesterday, a 23 year old woman from P&O Cruises (Australia) Pacific Explorer went overboard and was recovered dead over 7 hours later. Neither one of these Carnival Corp-owned ships hasMOB systems installed.