Military Use Of Drones Is A Dangerous Dimension Of Proxy War; Commercial Vessels At Grave Risk 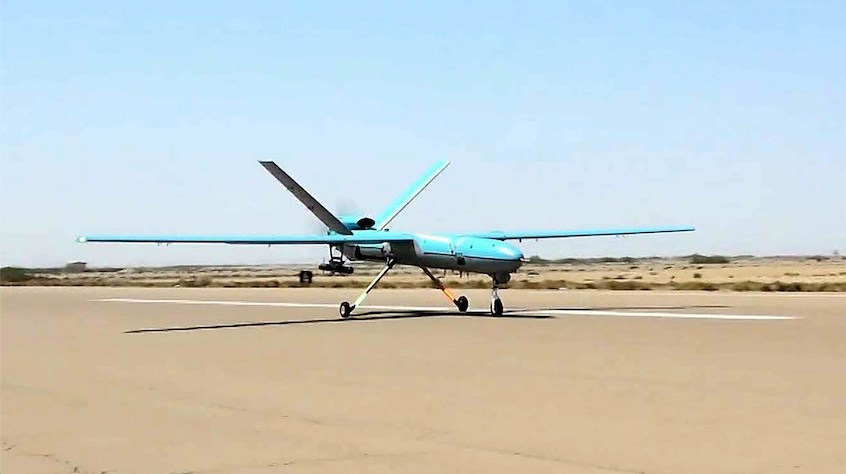 As a lethal military weapon, the power and significance of drones first came to be witnessed in the Azerbaijan-Armenia war.

After that, drones began to be used as a military weapon, and countries regularly upgraded their arsenals and tried to acquire drones, especially the Bayraktar from Turkey, as it had proven its lethality in the war in Trans-Caspian states. Pakistan quickly obtained the drone from Turkey and used these against India in J&K Union Territory.

The J&K police have shot down many drones, but many more have performed the assignment of dropping arms, ammunition, and even Indian currency notes close to the line of control on the Indian side. The police recovered a good quantity of arms, ammunition, RDX, and other equipment dropped by the drones in the night.

The Pakistani intelligence has successfully recruited conduits on the Indian side of the LoC who are conveyed through wireless about the site where the drones have dropped military hardware.

Iranian Drone Tactics
A new dimension has been added to drone tactics by Iran, a country that has also conducted research for streamlining the drones and using these at various destinations as dictated by the Pasdaran, meaning the security guards.

Several incidents have occurred in this connection when drones were used for a particular purpose.

The new dimension is deploying drones to attack the moving ships on high seas, causing significant harm to the ship.

Israeli Times on November 16 reported that a bomb-carrying drone had struck an oil tanker associated with an Israeli billionaire off the coast of Oman amid heightened tensions with Iran, officials said Wednesday. The attack on the Liberian-flagged oil tanker Pacific Zircon happened Tuesday night off the coast of Oman, a Middle East-based defense official told the Associated Press. The officials spoke on condition of anonymity as they did not have the authorization to discuss the attack publicly.

While no one immediately claimed responsibility for the attack, suspicion immediately fell on Iran. Speaking to the AP on condition of anonymity to discuss unpublicized details of the attack, an Israeli official said that it appeared Iran attacked with a Shahid-136 kamikaze drone. Iran has supplied those drones to Russia to target infrastructure in its fight with Ukraine.

In a statement, Eastern Pacific Shipping said the Pacific Zircon, carrying gas oil, had been “hit by a projectile” some 150 miles (240 kilometers) off the coast of Oman. The Faytuks News of November 16 said that the United Kingdom Maritime Trade Operations, a British military organization in the region monitoring shipping, told the AP: “We are aware of an incident, and it’s being investigated at this time.” Officials identified the vessel attacked as the Liberian-flagged oil tanker Pacific Zircon. Singapore-based Eastern Pacific Shipping operates that tanker, a company owned by Israeli billionaire Idan Ofer reported AP.

Political commentators pose a few questions that need to be brought to the notice of the reading public.

In the first place, it is to be ascertained through reliable evidence that the drone was of Iranian origin and that Iran was responsible for the attack. So far, we have only a theoretical position on who should be held accountable. Iran has developed advanced drone technology and has provided drone service to the groups it supports in the West Asian region. Of late, we are told that Iran has supplied drones to Russia, which uses these in the Ukrainian war.
Thirdly, we all know that Iran is deadly hostile to Israel.

Theocratic Iran has vowed to destroy Israel. Remember, the late Ayatollah Khomeini had once said that the road to Palestine lies through Qods. And lastly, we have instances of Iran obstructing the movement of ships in the Persian/Arabian Gulf. These are strong arguments to attribute the hitting of the Israeli oil tanker to Iranian machination. Presuming that is the case, Iran will deny the allegation because denial is the tactic behind which covert operations are conducted. In terrorist culture, denial is the most cherished explanation.

Drone Threat To Commercial Vessels
Obstructing commercial vessels in their normal maritime journey through the high seas is an internationally recognized crime. The intensity of an offense under consideration lies in the possibility of striking the tanker and making its contents, viz., oil and gas flow out on the high sea.

We have many examples of pollution of seawater and air due to gas and oil leakage destroying sea life and polluting of environs. It is sheer good luck that no such damage has been caused to the tanker as would have forced the outflow of energy resources it was carrying. That would have been disastrous indeed.

The Gulf of Oman is strategically extremely sensitive. More than 80% of crude oil and gas of the Gulf States passes through this channel. A covert attack on a tanker around this critical site will naturally become a severe concern to major world powers, including the US, China, and India.

It may force the major oil-importing countries to consider arranging adequate security and supervisory measures for oil and gas transporting tankers. The coastal countries are responsible for providing sufficient protection for navigating ships, especially the oil and gas tankers. It also has to be noted that sea piracy is a menace, and the pirates are acting nearby the Arabian Gulf. These cutthroats can quickly politicize the transportation of oil and can do many things to harass shipping companies.

Therefore, all interested oil-importing countries will need to rise above differences, maintain good and cordial relations with the coastal states, and ensure that the critical energy suppliers are allowed complete freedom of movement under a well-planned security arrangement.

It is not only Israel that should take care of its oil interests. The entire population of all five continents is involved in what happens in the Gulf.