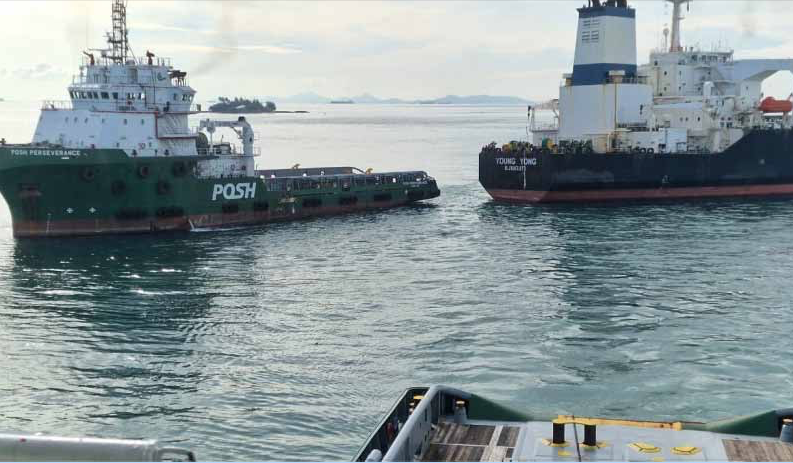 A laden VLCC that ran aground in the Singapore Strait was warned that it was in danger of doing so, Singapore authorities have said. The 306,000-dwt (built 2001) ran aground near Takong Kecil Island off Batam City on last week Friday near to a Singapore gas pipeline.

“Prior to its grounding, the port operations control centre (POCC) issued early shallow water warnings through its vessel traffic information system (VTIS) to the tanker on the potential risk of its grounding,” Singapore’s Maritime and Port Authority (MPA) said in a statement. The MPA said it had also alerted the Indonesian authorities immediately after the incident involving the Djibouti-registered tanker happened. “The Indonesian authorities are leading re-floatation efforts for the tanker, as well as preventive efforts against possible oil spills, as the vessel had grounded in Indonesian waters,” the MPA said.

“There is no report of injuries nor oil pollution, and MPA’s patrol crafts are monitoring for any oil spill pollution within Singapore Port Limits. “The POCC is also issuing safety broadcasts to warn transiting vessels to keep clear of the location of the grounded tanker,” the MPA added. Navigation through the Traffic Separation Scheme in the Singapore Strait is not affected, the maritime regulator added.

The MPA said it was informed by the master of the YOUNG YONG that it had grounded off the Riau Islands, Indonesia, at around 2020 on 26 October AIS data records the VLCC as having left Yantai in China on 22 September, heading to anchorage off Nipa Island in Indonesia.

The vessel is said to be carrying 284,000 tonnes of crude, according to Indonesia’s transport ministry’s Sea and Coast Guard.The VLCC was detained in China last December with 13 deficiencies including faults with lifeboats and personal equipment for fire safety