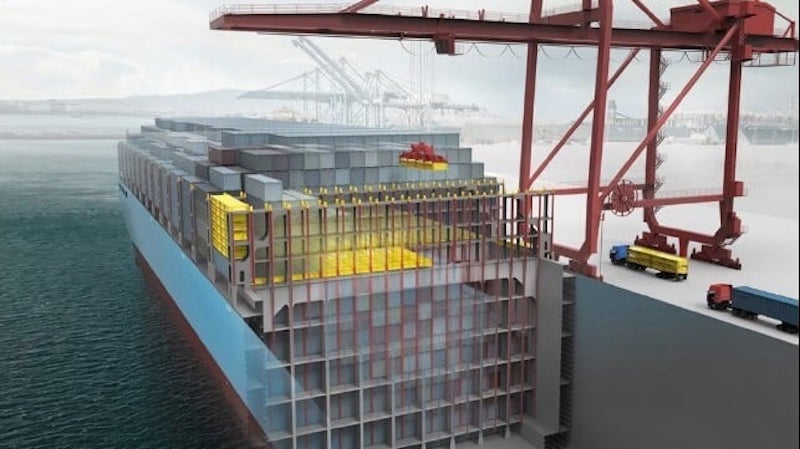 South Korean shipyard Hyundai Heavy Industries (HHI) has developed a new containership concept that does not require fixing of containers.

Hyundai Heavy Industries said that the novel lashing-free containership design, described as the world’s first, has won Design Approval from the American Bureau of Shipping (ABS) and the Liberian Flag Administration.

After loading containers inside a cargo load, a containership closes the hatch cover, and in order to maximize the capacity, loads another series of containers on top of that. As a result, it is necessary to fix the containers loaded on the hatch cover to a steel structure called a ‘lashing bridge’ that serves as a support to prevent the cargo from moving during operation. The securing of cargo to minimize shifting in transit is also known as ‘lashing’.

The lashing-free container ship uses a new concept device called a ‘portable bench (SkyBenchV2)’ that receives the load of the containers loaded on the upper deck and transfers it to the hull, eliminating the lashing bridge and hatch cover. HHI said that it has instead extended the cell guide, a device that allows vertical alignment and stacking of containers, above the deck.

As the container loaded on the upper deck is fixed by the expanded cell guide, there is no need for lashing. By omitting lashing, loading operations can be expedited and more efficient, saving time and money, while at the same time eliminating safety accidents during lashing as weel as the issue of lost containers at sea, HHI said.

Several thousand containers were lost at sea in 2020 and 2021 alone. Containers lost at sea represent a potential danger to maritime safety and are a threat to the environment, particularly with regard to the plastics they contain.

The shipbuilder added that it has completed domestic and foreign patent applications for lashing-free container ships and portable benches.