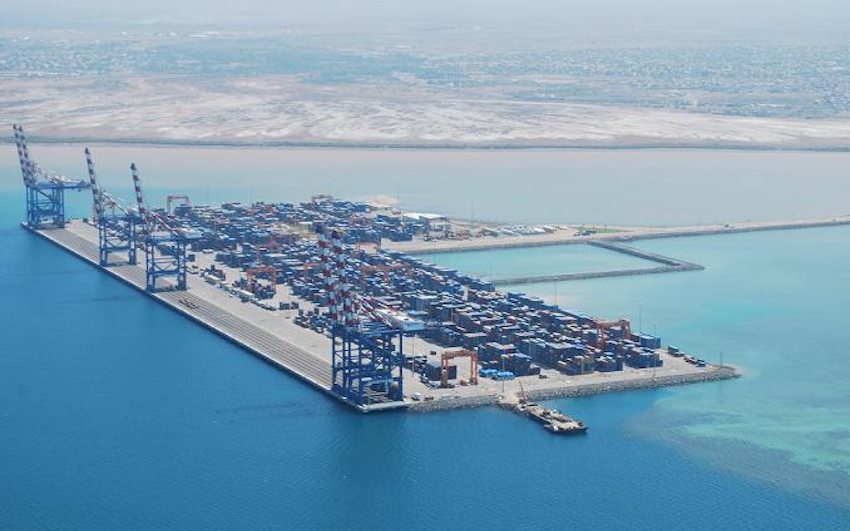 Not only the Port of Hamburg arouses desires in China – the country is particularly interested in central transport infrastructure in Africa. This raises concerns in Europe and the USA.Djibouti is a small country with less than a million people. Economically, the country has little to offer: hardly any industry, hardly any agriculture – the soil is barren and sandy.And yet Djibouti has something that has attracted every major power in the world for years: a coveted location on the “Bab al-Mandab,” a strait just 27 kilometers wide that ultimately connects the Suez Canal to the Indian Ocean. This shipping lane is vital for global trade. The former colonial power France has its largest foreign base here, the USA is well represented, even Japan and Italy have established themselves militarily for longer behind high walls of sand and concrete.

Military port with 2,000 soldiers
China has also been there since 2017, with a particularly impressive garrison: an area that is half a square kilometer in size, surrounded by a kind of Great Wall of China with impressive battlements, with space for 2,000 soldiers. The military port is said to have a pier more than 300 meters long, where even an aircraft carrier could dock. China was not only the financier and builder of the military port, the civil port facilities had preceded it. “The French got there before the Chinese,” explains Gouled Dougsieh, a logistics expert at the University of Djibouti. “But the Chinese came with money. That’s why all the new parts of the port that are under construction are financed by the Chinese. It’s a win-win situation.”Logistics expert Dougsieh believes that both countries will benefit from China’s involvement.

Chinese take over port entirely
In the meantime, the Chinese in Djibouti are not only port builders and investors, but also port operators. The contract for the competition from the Gulf States was not extended, allegedly because of poor management. It is unclear what role concessions made to the Chinese by long-term President Ismail Omar Guelleh, who has ruled with a firm hand. The fact is that the small country’s debt burden is growing rapidly – and the main creditor is the major power in the Far East.
All of this is not just about Djibouti. The huge port is practically the lifeline of the second largest country in Africa by population: Ethiopia. Of course, Chinese companies also built the new railway line from the port to the Ethiopian capital. The ports are the key to economic and, possibly increasingly, military influence on the continent. According to estimates, trade between China and Africa amounts to around 250 billion euros a year – and the trend is rising.

Core of the "Silk Road"
Africa is the largest regional component in China’s “Belt and Road Initiative”, which aims to bring Europe, Asia and Africa closer together. We’re talking about building infrastructure, which of course should bring economic success. 46 African countries have heeded China’s call and joined the plan. The ports are a key issue: According to the US Naval War College, Chinese banks and companies are now involved in the financing, construction or operation of 61 ports in 30 African countries. The US fears that China could use some of the objects militarily. For example port projects in the Comoros, a group of islands off East Africa – also a small country whose creditworthiness could quickly run out. And who might be susceptible to further covetousness.

From port to military base ?
Washington was particularly shocked a year ago by information that the Chinese could expand an ongoing port project in West African Equatorial Guinea, which is heavily indebted to them, into a military base. Washington fears China’s emergence in the Atlantic – symbolically at first. China is doing what Great Britain, the USA and France once did: protecting its own economic interests, nationals and companies, safeguarding China’s politics. Unlike Russia, this is not done loudly by mercenaries, but in a way that does not disrupt business. The pace that Beijing is showing, both economically and militarily, remains astounding. And the willingness to do so. “If Equatorial Guinea doesn’t allow a military base, some other country might,” says Isaac Kardin of the Naval War College.While that wouldn’t immediately change the “security dynamics” in Africa, it would change China’s long-term strategy and competition with the United States.