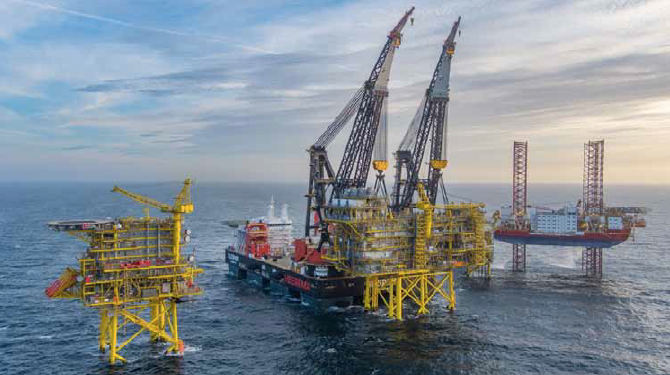 The world-lifting record was broken, by Heerema Marine Contractors’ semi-submersible crane vessel, the SLEIPNIR, in the Danish North Sea.

The vessel installed a 17,000 metric tonne Thermoelectric generator (TEG) Module for the Tyra II gas field, This lift, which was performed for TotalEnergies and its Danish Underground Consortium Partners, has been in the works for years, with Heerema and TotalEnergies collaborating closely. It was executed less than 24 hours after the 47-metre-tall module’s arrival at the field site from Batam in Indonesia. Also, thanks to an ideal weather window, it was completed four days ahead of schedule.

The 17,000-tonne lift is still under the Sleipnir’s max lift capacity of 20,00 metric tonnes, as it has two cranes of 10,000 metric tonnes lifting capacity each. The vessel, which measures 220 metres in length and 102 metres in width, is also the world’s most sustainable semi-submersible crane vessel. The vessel has broken several lift records since 2019.

Notably, the Sleipnir broke the world-lifting record with the Leviathan topside 15,300 metric ton lift in September 2019. After the installation of two bridges and one flare, the Tyra II project will be completed and should start producing gas in 2023/24, after over 10 years of construction. This high-tech hub for natural gas production in the Danish North Sea, 225 kilometres off the coast of Jutland, will have a total weight of over 35,000 tonnes and up to 54 metres in height.