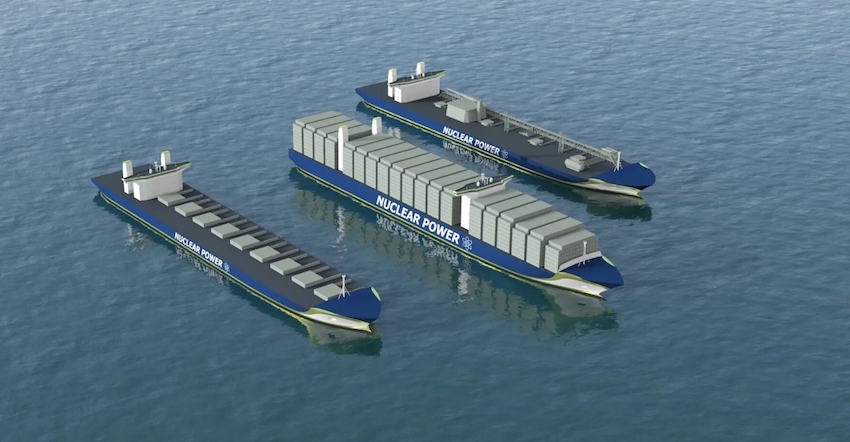 The search for alternative marine fuels is expanding rapidly in an aim to reduce the shipping industry’s amount of emissions. In the research C-Job published last month we proved that nuclear energy could be applied as marine propulsion in the future. Nuclear technology has seen several interesting developments recently and we are devoted to making use of its promising potential through our continued research.

Between November 2021 and July 2022 Koen Houtkoop has been working on his Master’s thesis here at C-Job. Previously, Lead Naval Architect Niels de Vries had identified nuclear energy as having potential in the maritime industry and being in line with C-Job’s sustainability goals and Koen set out to expand on these ideas.

Koen says: “Developments in nuclear energy have mostly been focused on land-based applications. However, a number of aspects make them of interest for maritime application. In particular, the significant reduction in harmful emissions. Compared to conventional fuel-based systems, my research showed that there can be up to a 98% reduction in CO2 equivalent emissions. Furthermore, the air pollution emissions, such as SOx, PM and NOx, are eliminated completely.”

Through extensive research it became clear that nuclear energy has high potential to be used safely as marine propulsion, and that a Molten Salt Reactor would have the best results for the long term in the maritime industry. These types of reactor concepts have passive safety properties, due to the salt being used as the coolant and fuel, and the strong negative temperature coefficient. When the temperature rises, the reactivity drops strongly, meaning that there are no issues with stability. Molten Salt Reactors also have a very high burnup. Burnup measures how effective a reactor is by indicating how much thermal energy it can extract from a given quantity of nuclear fuel. A high burn-up is favorable as it reduces the amount of nuclear fuel required.

Further, Molten Salt reactors show promising future potential in using the thorium cycle. With thorium, the high-level nuclear waste longevity can be reduced from more than 10,000 years to approximately 300 years. Furthermore, the thorium cycle has proliferation resistance, meaning it is a very unattractive route to create nuclear weapons out of it. This make makes the weaponization potential very low, as it is difficult to weaponize the respective material which is largely consumed in the reactor. The combination of these aspects of the Molten Salt reactor make it the best fit for maritime application.

The research also identified that large ocean-going vessels as having the most potential for nuclear propulsion. By creating four different concepts (bulk, container, tanker, and offshore), Koen analyzed key items, including the mass and volume of the energy storage and power generation system. These analyses showed that, even though the shield around the reactor is significantly large, in most cases, the nuclear option is lighter and more compact than the conventional marine diesel option. In turn, this confirms it feasibility and effectiveness in terms of ship integration.

C-Job has previously been at the forefront of researching and applying alternative maritime fuels. We are passionate in reducing the maritime industry’s amount of harmful emissions.

Niels de Vries, Lead Naval Architect at C-Job, says “We’re not one to shy away from the unconventional. Where maritime applications for ammonia, hydrogen, and methanol have advanced, nuclear energy so far has not been widely considered to be a viable option. As with other energy sources, appropriate safety measures must be in place and the technology itself must be developed further before it’s mature enough to be implemented but nuclear technology has serious potential.”

Plenty of research and updating of regulations still has to be done in this field. Additionally, society’s concerns also need to be addressed. Nevertheless, nuclear energy has shown to have significant potential to justify further research and development.