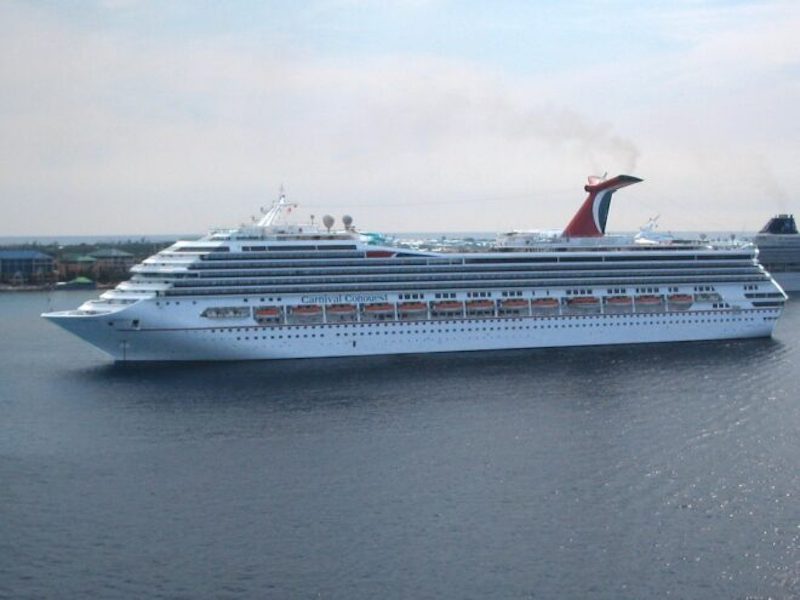 Last Friday, Carnival Corporation forecast a loss in the fourth quarter after it reported third quarter financial results which fell well short of Wall Street estimates. Carnival had a net loss of $770 million for the third quarter of 2022.

Carnival’s revenue has now missed expectations for the last ten (10) straight quarters dating back to fiscal 2Q in 2020.

Before Carnival announced the disappointing results, there was some hope that the cruise giant would finally return to profitability, but concerns with inflation, and high fuel prices in particular, as well as gargantuan debt of $35,000,000,000 (billion), caused shares of Carnival to plunge to $7.01 before closing at $7.02, a three-decade low.

Carnival’s financial woes continue notwithstanding non-stop advertising and cheaper fares. The cruise company also recently (in August) abandoned COVID-19 vaccination and testing protocols which resulted in a rise in bookings, albeit a more dangerous environment on cruise ships.
Carnival’s current predicament has been slowly, but surely, occuring as the pandemic continues. Carnival ended up incurring over $36,000,000,000 (billion) in debt in the last two years.

Earlier this year, we reported that Carnival was heading into a “perfect storm.”

An analyst (Seeking Alpha) concluded several months ago that although revenue increased at Carnival Corporation, the company suffers from a “continuous deterioration” and its financial structure is now “completely compromised after 2 years of huge losses.” He suggests that Carnival’s debt has more than tripled, and there are stringent covenants limiting corporate maneuvering. Meanwhile, “COVID-19 difficulties are still persisting.” He writes of the continuing effects of COVID-19 on the cruise line: “To date, what is left of the 2019 Carnival is very little. The cruise industry has been hammered by repeated difficulties and there is still no end in sight. In 2020 COVID-19 destroyed the entire industry . . . ”

Carnival’s struggles with its enormous debt continues to place its viability in jeopardy.

Another analyst (Motley Fool) explained the stark financial reality which Carnival and other cruise lines were facing as of last August: “Cruise companies are laden with debt — $36.4 billion at Carnival (as well as $23.8 billion at Royal Caribbean and almost $14 billion at Norwegian Cruise Line) Interest rates are climbing, and the higher they go, the more expensive it gets for cruise stocks to service their debt — and the longer it will take these companies to return to profitability (if they even can).” (Carnival not only has considerably more debt than its rivals but far more ships to maintain, equip and staff).
The same analyst further explained that the cruise lines’ cost of servicing the over $73,000,000,000 in combined debt which CCL, RCL and NCLH are facing, is over 11% a year in interest, an amount which no cruise line has ever netted in profits in a year.

Carnival and its supporters in the cruise  industry have tried to downplay this financial catastrophe. Carnival issued a misleading press release, which does not even mention its cripling debt but stresses that:
• Revenue increased by nearly 80% in the third quarter of 2022 compared to second quarter 2022, reflecting continued sequential improvement.
• Occupancy in the third quarter of 2022 increased 15 percentage points from the prior quarter.
• Since the announcement of the company’s relaxed (COVID-19) protocols in mid-August, aligning the company towards land-based vacation alternatives, booking volumes for all future sailings are considerably higher than strong 2019 levels.
But notwithstanding higher bookings and occupancy and increared revenue (compared to prior disastrous quarters), Carnival is still not profitable no matter how the cruise company tries to spin the facts.

Cruise trade publication Cruise Industry News went so far as to publish an article with this fanciful title: “Carnival Corporation: ‘On Course for a Great 2023’”

Carnival, which is facing higher fuel and food costs, has been able to attract a large number of guests to return to its cruise ships, notwithstanding the fact that COVID-19 still infects a large number of passengers every cruise, by heavily marketing cheap vacations at sea. But these loyal guests are themelves facing a higher costs of living due to the effects of inflation as Carnival itself struggles under its overwhelming $35,000,000,000 debt. This unworkable financial house of cards will not continue into 2023, in my view.

It’s just a matter of time before Carnival, which owns nine brands totaling over ninety ships, sells off some of its cruise companies and/or faces involuntary bankruptcy reorganization.