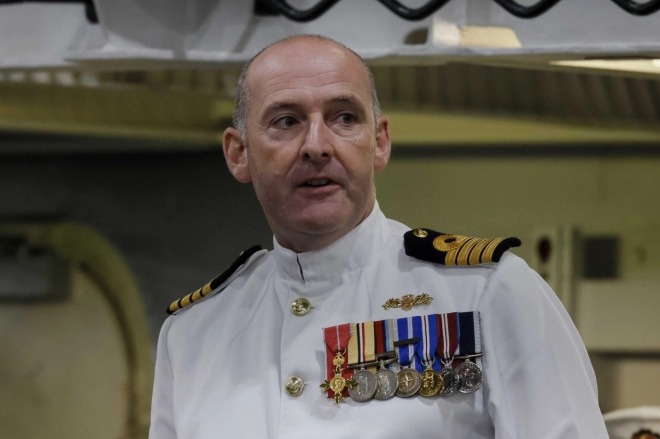 THE ex-captain of Britain’s newest aircraft carrier has been sacked over claims he hit on female sailors. Capt Steve Higham was sunk after a months-long investigation revealed a number of MeToo-style complaints. Capt Steve Higham has been sacked after a months-long investigation for allegedly hitting on female sailors

The former aide to ex-PM Boris Johnson was accused of holding inappropriate “mentoring sessions” with junior sailors in his captain’s quarters when he commanded the £3.2billion HMS PRINCE OF WALES. Top brass threw the book at him as a naval source insisted: “Rules are applied in the same way to all those who serve.” Capt Higham had been due to become Rear Admiral, but his promotion was put on ice pending a probe after a whistle-blower raised concerns when he handed over command of the warship in May. A source said Capt Higham was told there was “sufficient evidence to suggest his actions were inappropriate and his conduct was not compatible with continued Navy service”.

The source added: “The reason it took so long to investigate is that a number of people highlighted they had had inappropriate interactions that were not compliant with the military and the Royal Navy’s ethics.  “It is not illegal to have a relationship with someone in your workplace."But it is inappropriate in the Navy." He was spared a court martial as “he didn’t break the law”, but was handed an “administrative dismissal” by Navy chiefs on Monday.