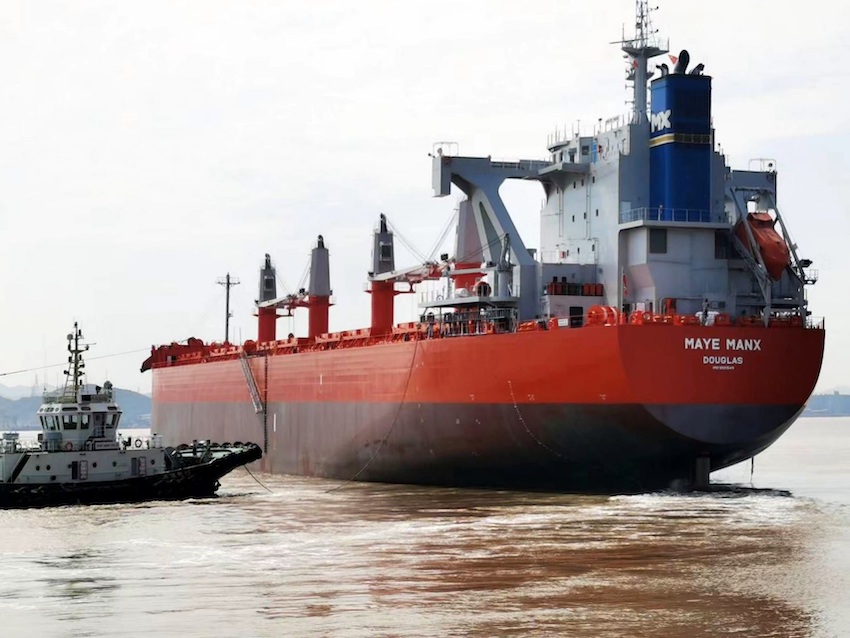 The Isle of Man Ship Registry (IOMSR) is expanding its fleet after securing a new deal with fellow Isle of Man based ship owner MX Bulk.

The agreement will see the IOMSR flag four new 63,878 MT bulk carriers presently being built by the Tsuneishi Group in Zhoushan, China. The vessels include the recently delivered Ellan Manx and Maye Manx as well as the Greeba Manx and Kirry Manx which will come into service this autumn.

“We are very pleased to extend our relationship with MX Bulk,” he said. “We share much in common from our Isle of Man headquarters to our dedication to quality, high standards and seafarer welfare.  The Isle of Man Ship Registry can now offer support through our China representative Jon Kingdon in Shanghai. Through Jon we can supply on the ground technical support in China while the ships are being built as well as here on island. The Far East and China remain key growth markets for the IOMSR with two thirds of our fleet now managed in Asia.”

Cameron said there remains a considerable respect among tanker and bulk carrier owners for the quality and history associated with the Red Ensign allied with the Royal Navy protecting its ships anywhere in the world.

“Owners want a flag that they can rely on particularly for the speed of technical support,” he said. “That is something the Isle of Man is well known for, whenever and wherever there is a defect or issue with port state control the IOMSR team reacts immediately. We further offer clients an easy, efficient and competitive service. This includes low fees, with one annual payment and no stealth charges, whereas some open registries charge for almost all additional services.

“There is no annual tonnage tax based on size of the ship, no inspection fee, no consular fee, no casualty investigation fees and we offer a discount for multi ship fleets as well as fee incentives for environmentally friendly ships.

“We continue to develop and lead. We were one of the first flag states to offer digital certificates. We were also the first flag state to offer a discount on registration fees for vessels using green technology and we were the first registry to launch a seafarer welfare app to support seafarers’ mental health.”