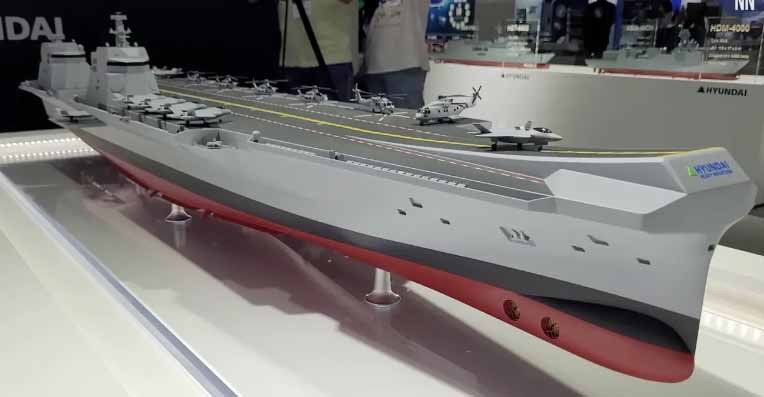 The Republic of Korea Chairman of the Joint Chiefs of Staff General Kim Seung-kyum said on September 19th that the military will consider acquiring an aircraft carrier that is larger than the current CVX design if a carrier capable fighter is developed domestically. During a session of the National Defense Committee, Kim said that the “plan to develop carrier aircraft domestically,” mentioned by Member of National Assembly Kim Yeong-bae, concerned a navalized variant of the KF-21. When asked whether this would mean that the military was considering the acquisition of “not a light aircraft carrier, but a medium-sized one” by Kim Yeong-bae, he replied: “Major changes [to CVX] need to be made anyways, so these changes and [the acquisition of a medium-sized carrier] will be evaluated together. The KF-21 will not be able to take off or land vertically.” Kim also responded to questions regarding the 2023 defense budget which does not include CVX.  “The [CVX program] has already been approved by the joint chiefs.

There are differing opinions about whether aircraft carried on board should be developed domestically. CVX was left out of the defense budget for next year because we want to prudently reevaluate major assets so that ... they can be designed to adequately respond to threats.” The new administration had received criticism from domestic media for leaving CVX out of the 2023 defense budget, with some pundits saying that it was trying to erase the legacy of former President Moon Jae-in.Kim Seung-kyum’s comments follow similar remarks supposedly made by the Minister of National Defense Lee Jong-sup. “The Minister of National Defense said that a light aircraft carrier does have utility. However, given that the aircraft carried on board will be designed domestically, he said that the Ministry of National Defense is reevaluating aspects of the program.” CVX has become a hotly debated issue in recent years. Some domestic observers have called it a “sitting duck” and requested the acquisition of a bigger medium-sized carrier. In South Korea, an aircraft carrier with a displacement of over 60,000 tons is considered to be “medium-sized.”

The CVX program evolved from the Landing Platform eXperimental (LPX) program that saw the Republic of Korean Navy acquire its largest vessels so far, the Dokdo class amphibious assault ships. Dubbed LPX-II, preliminary plans for the carrier envisioned an amphibious assault ship-like platform that would also operate fighter aircraft. However, in August 2020, the Republic of Korea Navy (ROKN) announced its intention to acquire a fully-fledged aircraft carrier with the term CVX being introduced in February 2021. The ROKN hopes CVX will be mission ready by 2033. CVX is expected to cost 2.3 trillion Korean won ($2 billion) to construct and around 50 billion Korean won ($45 million) per year to maintain. With a length of 265 m and width of 43 m, the ship will have a light and maximum displacement of around 30,000 tons and 40,000 tons respectively. This will allow CVX to operate 16 F-35B fighters as well as 8 helicopters. It will also feature a high degree of automation and have a complement of 440 crew, excluding the air element.

Like the Royal Navy’s Queen Elizabeth-class, the carrier will have two islands. However, it will not be equipped with a ski-jump, limiting the operational capabilities of its aircraft. The South Korean carrier will be equipped with the active electronically scanned array radar being designed by Hanwha for the “integrated mast” on the KDDX destroyer. The long-range S band radar is expected to have a range of 300 km, while short range detection will be carried out by its X band radar. The vessel will also feature LIG Nex1’s torpedo acoustic countermeasure, Haegung or K-SAAM surface to air missile system, and close-in weapon systems for point defense.