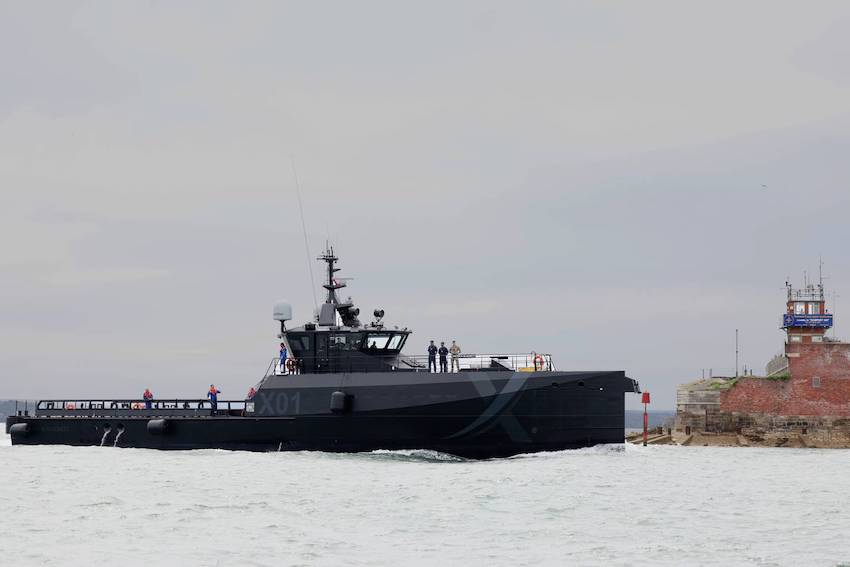 A Dutch company has delivered a test bed vessel to the British Royal Navy to help the service rapidly experiment and field the latest in autonomous and lethality technologies.

The 270-ton vessel arrived at the Portsmouth naval base in southern England earlier this week, ahead of its official acceptance on July 29 for use by NavyX, the service’s experimental technology unit formed to lead the innovative work.

Damen Shipyards supplied the vessel less than a year after it was ordered. The ship is a modified 42-meter (138-foot) fast, crew-supply platform known as the Damen FCS 4008. This is the first time the Dutch shipyard supplied a vessel directly to the Royal Navy. The company has set up a maintenance operation in Portsmouth to support the vessel.

The vessel was already built but not previously operated, enabling the Dutch yard to quickly deliver the adapted ship within the rapid timescale demanded by the Royal Navy.

The ship is named XV Patrick Blackett, after a British physicist who served in the Royal Navy during World War I and won a Nobel Prize for physics in 1948.

NavyX has operated since 2019, primarily exploring autonomous vessels for potential use by the Royal Navy. The experimentation unit has tested several advanced technologies, including L3Harris Technologies’ Mast-13 autonomous maritime demonstrator as well as a BAE Systems-supplied crewless rigid inflatable boat for potential general duties with the Navy.

The new vessel will enable NavyX to experiment without placing demands on the service’s understrength surface warship fleet.

“The arrival of this vessel is a pivotal moment for NavyX’s ability to deliver output, and is a step change for the Royal Navy. She will give us greater flexibility to experiment with novel military capabilities, iterate and accelerate new technology, kit and concepts for the benefit of the Royal Navy and industry,” NavyX boss Col. Tom Ryall said.

XV Patrick Blackett will take part in Royal Navy and NATO exercises, with the possibility upgrades with autonomous technology, Britain has said.

Damen said the 140-square-meter deck on the FCS 4008 provides a “large, unobstructed area for UAVs, AUVs [autonomous underwater vessels] and other cutting-edge technology. The extensive internal area that would normally have seating for up to 100 personnel is being converted into an operations center and a meeting room.”

It’s the second advanced technology platform revealed by Britain this month. At the Farnborough Airshow on July 18, the Defence Ministry announced it is investing in building a technology demonstrator for the Tempest sixth-generation combat air program.