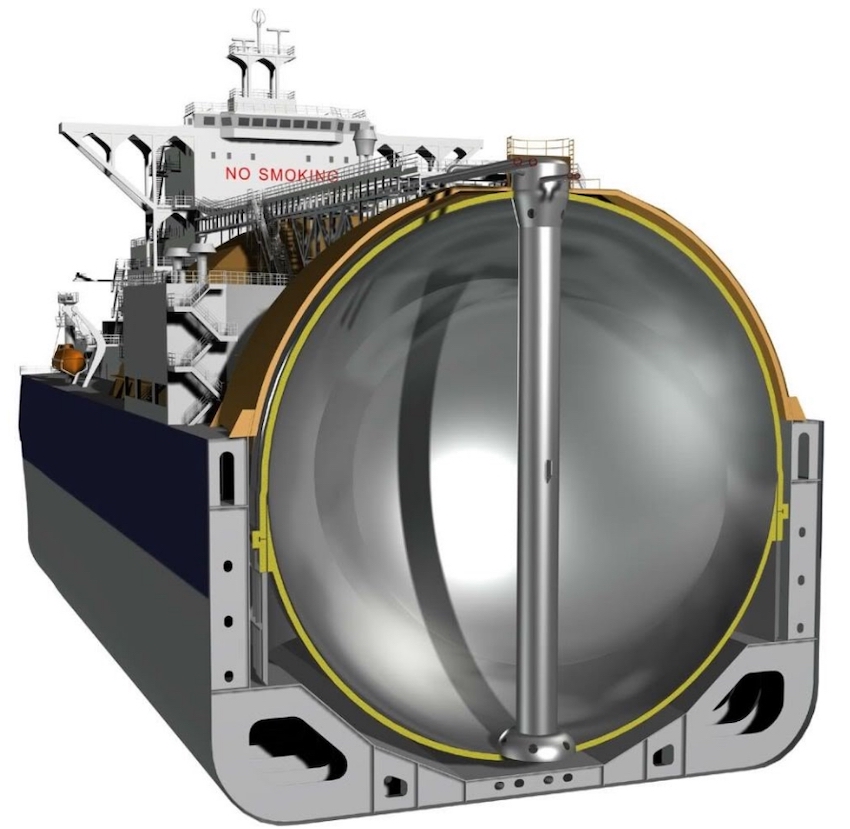 Mitsubishi Shipbuilding Co., Ltd., a part of Mitsubishi Heavy Industries (MHI) Group, has acquired Approval in Principle (AIP)(Note1) from the French classification society Bureau Veritas (BV) for a spherical cargo tank system for liquefied CO2 (LCO2) carriers. A presentation ceremony was heldLCO2 carriers transport liquefied CO2 gas in cargo tanks in a low-temperature, high-pressure state. For that reason, independent Type C tanks as defined by the IGC Code(Note2) are typically used for the cargo tank system of such vessels. Until now, various tank structures have been available, including cylindrical, bilobed and trilobed designs. Now, Mitsubishi Shipbuilding has succeeded in developing a spherical cargo tank system for LCO2 carriers, applying its advanced technologies in structural analysis and material evaluation cultivated through the design and construction of liquefied natural gas (LNG) carriers equipped with spherical tanks. Development of the new spherical structure for LCO2 carriers resulted in acquisition of the AIP from BV.

As part of the energy transition strategy being promoted by MHI Group, Mitsubishi Shipbuilding has established a growth strategy called “MARINE FUTURE STREAM vision for 2050”. The strategy focuses on two overarching targets: “decarbonization of the maritime economy” through use of renewable energies and carbon recycling, and “safe and secure future for society” through autonomous operation and electrification. The company seeks to achieve these dual goals through creation and implementation of marine-related innovations. With acquisition of the new AIP for its spherical cargo tank system for LCO2 carriers, going forward Mitsubishi Shipbuilding will ever more actively pursue the development of LCO2 carriers and related business as a marine system integrator. At the same time, the company will also dedicate its full resources to developing and providing technologies to respond flexibly to the diverse LCO2 carrier needs of the market to build a CCUS(Note3) value chain – with the ultimate goal of achieving a CCUS value chain straddling land and sea, to realize a decarbonized society.

Note 1: Approval in Principle (AIP) indicates that a certification body has reviewed an item’s basic design and confirmed that it meets technical requirements and safety standards. Inspection of Mitsubishi Shipbuilding’s spherical cargo tank system was conducted based on the IGC Code as it applies to marine vessels that transport liquefied gas in bulk, as well as BV’s own classification regulations.

Note 2: The International Code for the Construction and Equipment of Ships Carrying Liquefied Gases in Bulk (IGC Code) is an international regulation stipulating the safety requirements for ships that transport LCO2, LNG, or other liquefied gases as cargo in bulk.