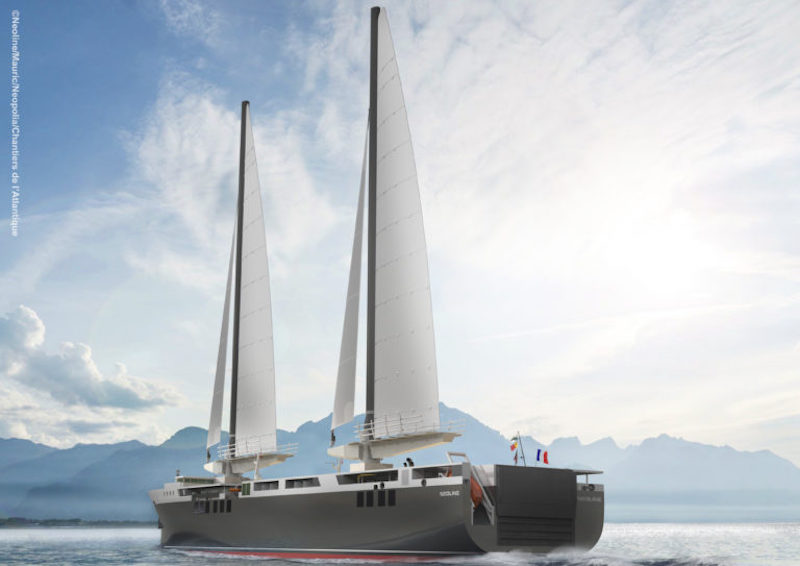 By choosing the Solid Sail solution, Neoline is one step closer to launching its first Neoliner, a 136-metre main sail-powered merchant ship.

After technical studies carried out by Chantiers de l’Atlantique, Neopolia, Mauric and D-Ice, the ship’s rigging will consist of two Solid Sail folding rigging systems, the company explained. The systems will include two 76-metre high masts, each equipped with the Solid Sail sail technology of 1,100 square metres and a flexible jib of 400 square metres, for a total sail area of 3,000 square metres.

According to the calculations, the Solid Sail rig, with its rigid sails, will provide equivalent or even better performance than the 4,200 square metres of flexible sails initially planned for the duplex rig, thanks to the thinness and vertical elongation of the structure, as well as the reduction of the masking effect of the sails.

The expected lifetime of the sail is 25 years, which will reduce maintenance costs compared to soft sails, while its production and installation on the hull of the Neoliner will boost the local economy, Neoline stated.

Neoliner project under full sail
In addition to picking the main propulsion for the first sailing cargo ship, which is considered a major evolution of the project, the company has also provided other updates on the progress of the Neoliner development.

The crowdfunding campaign was launched back in January on the WiSEED platform and continues until 12 June this year. So far, €700,000 (around $736,750) have been raised out of €1 million (around $1.053 million) sought for this collection, which is part of fundraising of €3.3 million ($.47 million) from financial investors., Neoline informed.

Furthermore, the company has signed a letter of intent with a new reference partner after the Sogestran group decided to withdraw from Neoline’s shareholding.

Impacted by the geopolitical situation and the global pandemic, the beginning of the construction has been postponed to the fall of 2022. However, Neoline is still aiming for commissioning by 2024-2025, as initially announced.

The sailing vessels will operate on a transatlantic pilot line, which will serve Saint-Nazaire, Saint-Pierre-et-Miquelon, Baltimore and Halifax.

According to Neoline, the vessels will save 80 to 90% of fuel compared to a ship of equivalent size.

It is also worth reminding that the company has already secured firm transport contracts with customers such as Renault Group, the Groupe Beneteau, Manitou Group, Hennessy, Michelin, Clarins, Longchamp and Rémy Cointreau.