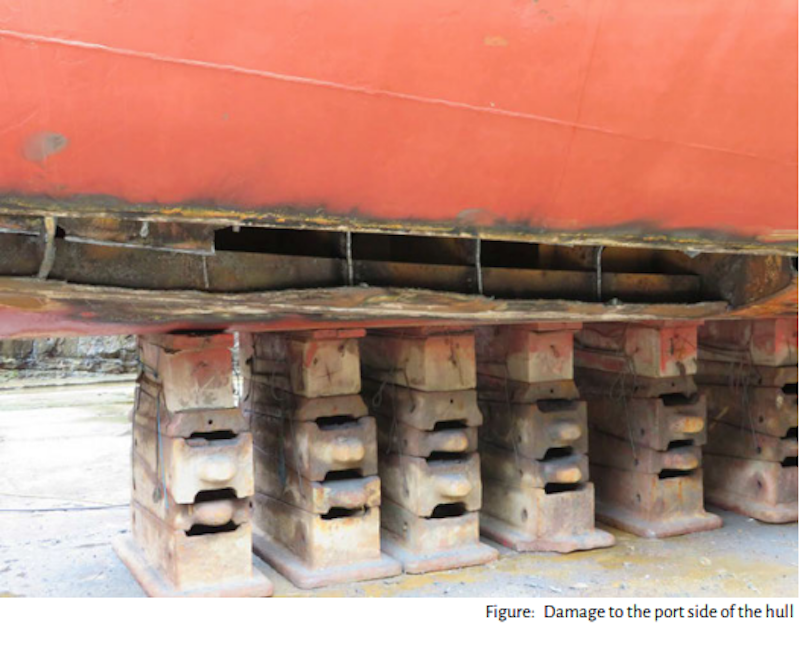 Navigating in fog can mean that emerging situations are diffcult to understand and, sometimes, stop.

A ro-ro freight ferry was inbound to its destination port on a summer morning. The weather was fne and the seas slight, although there were numerous fog patches in the area. The bridge team comprised the master, OOW and a Pilotage Exemption Certifcate (PEC) holder. The PEC holder had the con and was using the radar to navigate; he was also steering the ferry himself. It was two days after spring tides and entry into the port was planned for the middle of the ebb tide. The tidal stream was predicted to set across the harbour entrance to the north-west at about 0.8kts, reducing in the confnes of the breakwaters. As the ferry approached the breakwaters of the port at a speed of 10kts, the visibility reduced to about 150 metres. The master asked the PEC holder if he was happy to continue and the PEC holder confrmed that he was. The planned track into harbour was 237° but the ferry was making good a 253° course over the ground. The PEC holder altered the heading to 225° and, as the ferry returned close to track, further adjusted the ferry’s heading to 234°. Once the ferry was in the channel, the PEC holder reduced its speed to 6.5kts. The ferry’s heading was altered to 245° and the ferry then moved to the north of track. Neither the bridge team nor the PEC holder, who was observing the ferry’s movement by radar, immediately noticed the change of track. The ferry had moved to the edge of the navigable water before the master and PEC holder saw the northern breakwater and realised the danger. The PEC holder applied port helm to counteract the tidal stream. With 30° port helm, the ferry rapidly returned to track before crossing to the south. After about 15 seconds, the PEC holder realised that the ferry’s bow was approaching the southern limit of the channel and applied full starboard helm. The manoeuvre was too late and could not prevent the ferry from grounding on the rocks that lay at the edge of the channel. The ferry was eventually refloated with the assistance of a harbour tug, but not before suffering substantial damage to the port side of the hull (see fgure), port propeller and rudder. There was no pollution and nobody sustained injuries.

1. Teamwork → Bridge teams play an essential part in maintaining ship, crew and cargo safety. To be effective, a bridge team must have a shared mental model of the task in hand and each member of the team must be clear about their duties. When the task includes pilotage, the pilot or PEC holder must be incorporated into the bridge team and the plan discussed in detail. 2.

2.Procedure → Navigational equipment continues to develop and advancements bring greater capability for improving the bridge team’s awareness of progress and navigational hazards in proximity of the ship. However, this equipment can only improve safety if used correctly.

3. Plan → Restricted visibility is a game changer. Bridge teams should always plan for the unexpected and a well-placed abort position can prevent a ship from being placed in potential danger. It is usual for companies to require bridge manning to be increased in poor visibility. This is so that tasks can be shared and no-one becomes overloaded.