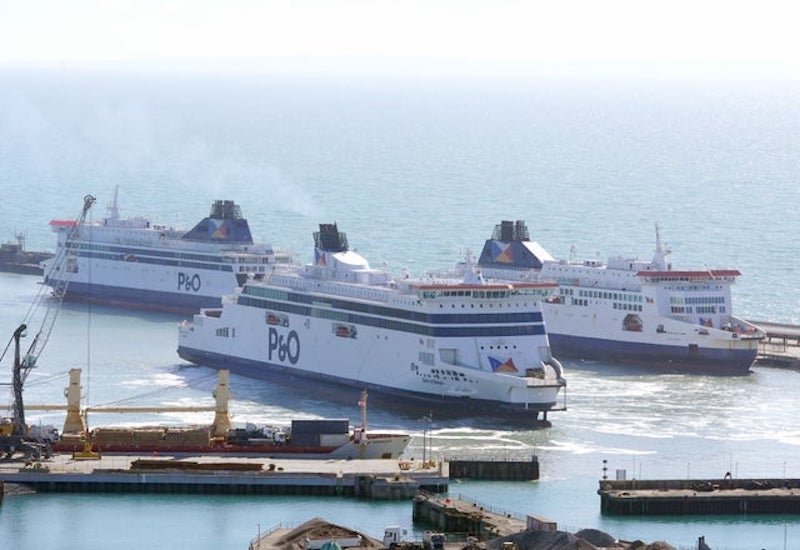 Ministers and trade unions have condemned P&O Ferries’ mass sacking of 800 British seafarers to replace them with agency crew as shameful and “completely unacceptable”, amid furious calls for action against the company’s Dubai owners.

P&O Ferries’ services could be suspended for up to 10 days, disrupting its cross-Channel and Irish Sea routes, after an extraordinary day in which the operator sacked its entire British seafaring staff without notice. They learned the news of their redundancy via a pre-recorded video message this morning.

Politicians on both sides called on the government to act to stop what Labour and trade unions called a “scandalous betrayal”.

Staff were told by P&O to discharge passengers and freight before being sent a video message telling them P&O “vessels will be primarily crewed by a third-party crew provider … Your final day of employment is today.”

Long-serving crew were removed from ships by security guards in Dover, Kent, and in Larne, near Belfast. Replacement agency workers, typically a cheaper option and believed to have been recruited in the UK and Europe, had already boarded some vessels in Dover on Thursday afternoon. Unions had instructed members to stay onboard as they demanded urgent government intervention, but by the evening the potential for prolonged standoffs ended, when crew in Hull left their ship. Earlier, the Dutch captain of P&O’s Pride of Hull had supported crew who refused to leave.

In Dover, one 46-year-old crew member of 30 years’ service, said he was worried about how he would support his family. He said: “There were grown men in tears worrying what to do about their mortgages. We’ve been treated abysmally. This was planned for ages; it’s not off the hoof.”

Legal experts raised questions about whether there had been a breach of employment laws, which stipulate that any employer planning to sack more than 100 staff must give ministers 45 days’ notice. The government said it was given no notice of the plans. The prime minister’s spokesperson said: “The way these workers were informed was completely unacceptable. Clearly the way that this was communicated to staff was not right and we have made that clear.”

The RMT union’s general secretary, Mick Lynch, said it was seeking urgent legal action over “one of the most shameful acts in the history of British industrial relations”.

Speaking in the Commons, Robert Courts echoed Downing Street’s condemnation of the manner in which P&O crew were fired, saying he was “extremely concerned and frankly angry at the treatment”. The maritime minister added: “Reports of workers being given zero notice and being escorted off their ships while being told that cheaper alternatives will take up their roles shows the insensitive way P&O have approached this issue.” But he stopped short of describing the action as illegal or promising any action, saying: “Their finances are a matter for them alone.” Courts said the supply of critical goods and services should not be affected by the temporary suspension of P&O’s ferries on the Dover-Calais crossing, as well as from Hull to Rotterdam, Liverpool to Dublin, and Cairnryan to Larne, which he said could last a week to 10 days.

The shadow transport secretary, Louise Haigh, said P&O Ferries’ dismissals, including the use of “handcuffed-trained security, some wearing balaclavas, marching British crew off their ships” were “the actions of thugs”. She said it was a scandal that a Dubai-owned company, which had taken British taxpayers’ money during the Covid pandemic, should act in such a way, and demanded the government review DP World’s contracts, including to run freeports in the UK.

DP World, one of the largest port operators in the world, is owned by Dubai’s sovereign wealth fund, and chaired by Sultan Ahmed bin Sulayem, who also heads Dubai’s customs authority. The group owns London Gateway port – the centrepiece of the first of the controversial freeports championed by the chancellor, Rishi Sunak, and established by the government last year.

P&O Ferries was given £33m in emergency support by the UK government to ensure freight kept sailing in May 2020, and it also furloughed 1,100 staff with taxpayer help.

Conservative MPs joined calls for the government to act. Huw Merriman, the transport select committee chair, said: “The government must do everything it can – including tabling emergency legislation if needed – to ensure that this appalling employment transaction cannot be completed.” The Dover MP, Natalie Elphicke, urged the minister to discuss “what more could be done to hold DP World and P&O Ferries to account for their disgraceful behaviour”.

The Scottish first minister, Nicola Sturgeon, said she was deeply concerned at the news.

A spokesperson for P&O Ferries said it had to take a “very difficult but necessary decision” to “secure the future viability of our business, which employs an additional 2,200 people, and supports billions in trade in and out of the UK”. They said P&O Ferries was not a viable business in its current state. “We have made a £100m loss year-on-year, which has been covered by our parent [company] DP World. This is not sustainable. Our survival is dependent on making swift and significant changes now.”

The maritime union Nautilus International said the news was “a betrayal of British workers”. The head of the European seafarers’ union ETF, Livia Spera, said it was “astonishing that this can happen in a major developed country like the UK”.

P&O initially told customers on Twitter that services would be “unable to run for the next few hours” and that port teams would arrange travel via an alternative operator. Cross-Channel ferry passengers and truck drivers were expected to be diverted to DFDS or Eurotunnel services. Passengers on Irish Sea crossings have been sent to Stena Line But a number of passengers were left stranded and unable to rebook immediately on alternative services on Thursday morning.

A driver in Calais due to return to the UK told the PA Media news agency he had been waiting for a ferry since 6am, adding: “More than anything I’m frustrated at the fact nobody from P&O was there to help and advise. I’ve never had such shoddy service from anybody.”

DP World bought P&O Ferries for a second time in 2019, for £322m, after selling it earlier in the decade.

The business is believed to have been making escalating losses, with the rising cost of diesel adding to disruption from Covid and post-Brexit paperwork in cross-Channel traffic. DP World said it had never taken a dividend from P&O Ferries.

DP World has also come under fire for a £146m deficit in the Merchant Navy Ratings pension fund, which includes retired P&O crew. Sources said the taxpayer could be liable for the shortfall if it was left unpaid.