The last thing Ukraine needs is a shipping crisis. 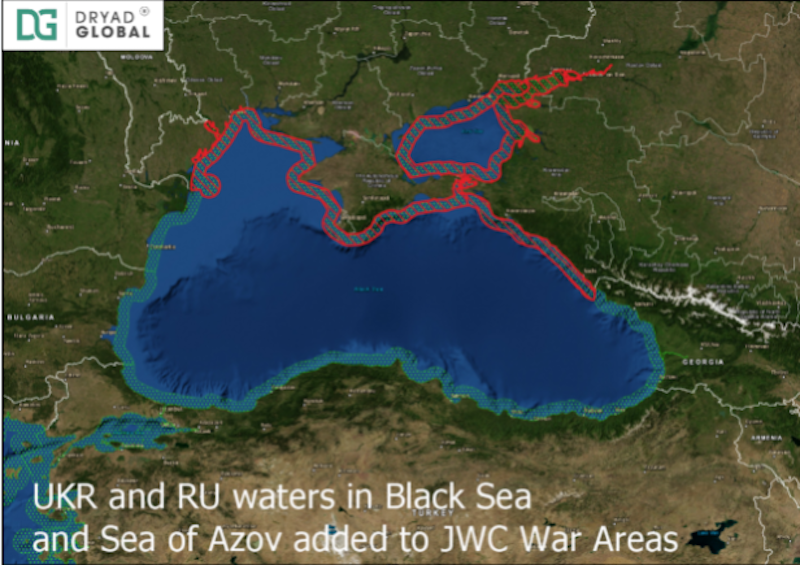 Last week, the Joint War Committee placed the Russian and Ukrainian parts of the Black Sea and the Sea of Azov in its top-risk category. The JWC is the little-known but powerful insurance industry body that classifies regions of the world according to risk, and its highest risk category obliges companies to get special permission from their insurers before entering the area. The JWC’s decision could mean serious delivery disruptions for Russia and Ukraine, heaping more economic pressure on an already volatile geopolitical situation and threatening vital imports of fuel and medicines.

On 10th February, Ukraine had accused Russia of blockading the Sea of Azov, the smaller body of water that is located northeast of the Black Sea and connected to it via the narrow Kerch Strait. Formally speaking, Russia wasn’t blockading the Sea of Azov, but it had just announced live-fire military exercises—including one close to the strait—that would have made the waters too risky for shipping. Around the same time, amphibious Russian ships arrived in the Black Sea.

In London, the Joint War Committee’s members were watching. The JWC—composed of insurance industry executives and advised by former members of the armed forces and the intelligence community—is keenly aware that its decisions can cripple countries and regions. The JWC is not an inter-governmental body—but is in practice so powerful that it might as well be one. “Being on the [high-risk] list is clearly a reputational problem, which we completely understand,” the JWC’s secretary, Neil Roberts, told me last month. The committee’s job, though, is to provide insurers with expert assessment so underwriters don’t mistakenly insure operations in extreme-risk countries, regions and waters. Among the other entries currently in the JWC’s red category: Libya, Nigeria and Somalia.

By 15th February, the JWC had seen enough. Any shipping company now wanting a vessel to traverse the Sea of Azov or the Russian or Ukrainian parts of the Black Sea will need agreement from its insurers. While underwriters are not legally obliged to follow the JWC’s assessments, the vast majority do so because it relieves them of the burden of taking sole responsibility for assessing every risk zone. The JWC’s assessments also provide safety in numbers. Without its findings, insurers wanting to withdraw from risky areas might be reluctant to do so for fear of losing clients. When the JWC’s notice period ends in a few days’ time, shipping in the Sea of Azov and the Russian and Ukrainian parts of the Black Sea will become far more difficult and far more expensive. And the waters will remain in the red category for some time even if Russia announces more withdrawals, because even if they are genuine, any troops and vessels that are withdrawn could easily reappear. Like every ministry of defence, the JWC looks ahead.

As the JWC made its decision, several hundred tankers and container ships were travelling in the region. The oil tanker TN1 was en route from Komysh Burunska in Ukraine to the Russian port of Kavkaz. The oil and chemical tanker Seaways Horn was bringing goods from Tuzla near Istanbul to Novosibirsk. The cargo ship New Challenge was going from Istanbul to the Ukrainian port of Nika Tera. At last count, the Port of Nika Tera shifted 8.6m tonnes of cargo annually, including 5.9m tonnes of grain. “Ukraine’s biggest oil terminal sits in the Black Sea as well,” Simon Lockwood, head of shipowners at the global insurance broker WTW, told me. “Clients are already asking for clarification on the implications and potential costs.”

Shippers’ concern is unsurprising. While Libya and Somalia are mainstays in the JWC’s red category, Russia and Ukraine are new entries: not even the annexation of Crimea in 2014 caused the committee to red-list the countries’ waters. “In 2018, after the clash in the Kerch Strait [involving Ukrainian commercial vessels and the Russian coast guard], we had commodities traders looking for rail alternatives to move cargo from Mariupol because they were terrified Russia would close the Kerch Strait access,” Cormac Mc Garry, a maritime analyst at Control Risks, told me. Mariupol and Berdyansk, the Ukrainian Sea of Azov ports, “suffered as soon as the Crimean Bridge went up [over the Kerch Strait] a few years ago, largely due to the perception of risk. The JWC listing might extend that impact to… other Black Sea ports.”

The waters now on the red list are crucial to both countries. The Black Sea and the Sea of Azov handle 30 per cent of Russian cargo traffic, with ports primarily processing oil and coal. Ukraine borders no other water. Its ports handle roughly equal amounts of imports and exports, and those goods will now have to travel by other means—unless each shipping company gets permission from its insurer for every vessel it wants to send. “There will also be restrictions regarding the type of cargo vessels can carry, and for these types of risky waters insurers that are willing to take on the risk typically add higher premiums,” Lockwood explained. “There may also be the additional cost of crew war bonuses to be taken into consideration if payable under contract. With Russia and Ukraine already subject to sanctions, this all adds a lot of complexity.”

Though the waters off Libya and Iran are JWC red-category areas, oil tankers still dock in Benghazi and still travel through the Strait of Hormuz. Even during height of the 1980s tanker war between Iran and Iraq, when the two countries attacked vessels headed for the other country, some were still going through the dangerous waters, switching off their navigational lights to increase their chances of making it to port. But any shipping companies willing to take the risk today, even if granted permission, will face a premium. “The Black Sea’s location is not particularly convenient for anyone to begin with,” Lockwood said. “Typically the shipping companies will pass on the cost to the charterer. If costs are prohibitively high, then charters will be lost.” When globalisation clashes with geopolitical confrontation, actuaries rule.

Ukraine thus faces the loss of many of the 1,000 ships that call each month. And companies will struggle to deliver the country’s top imports—which include refined petroleum, packaged medicines and coal briquettes—via air or rail. Though few people will feel sorry for Russia, it faces enormous disruption even if it manages to shift its shipping traffic elsewhere. In the words of the famous sea shanty: “Soon may the Wellerman come / To bring us sugar and tea and rum.” But not when there’s a war on the horizon.