China’s New Submarine Is Unlike Anything In Western Navies 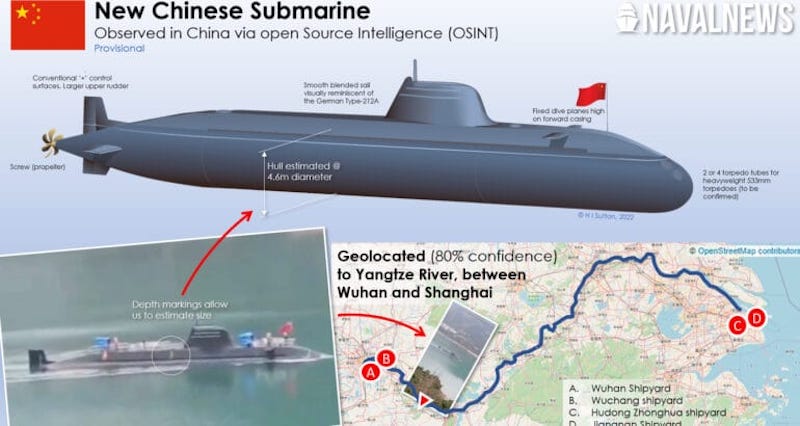 The U.S. Navy only operates nuclear-powered submarines. China meanwhile never stopped operating conventional submarines even though they are less capable. This has advantages and disadvantages. But a new submarine pushes this difference further. It is much smaller than those used by other leading navies.
Since a video was leaked of a new Chinese submarine on February 8, analysts have been trying to make sense of it. While the Chinese Navy’s (PLAN) overall submarine expansion has been towards larger submarines, notably nuclear-powered ones, this new boat does not fit the expected trend. It may be sophisticated, but it is also small. It does not neatly fit into the array of types currently fielded by other major navies. China is, it appears, doing its own thing.

The submarine was visible in a short video clip uploaded on Chinese social media. The video was later deleted from some of the initial accounts, after it attracted attention, but not before we had gathered the key information. Naval News has been able to provisionally geolocate the video to a particular spot along the Yangtze River in China.

The location is downstream from the shipyards in Wuhan which are known for building submarines. And the submarine was travelling towards Shanghai where some Wuhan-built submarines are moved to for fitting out.

There are two shipyards in Wuhan, one near the center and a newer one outside known as Wuchang, which build submarines. Notably, they only build conventional submarines so there is no suggestion that this new submarine is nuclear powered. The main class that they currently build is the Type-039A Yuan family. The shipyard downtown appears to be used for first-in-class and special work, so this may have been built there. Both yards are part of CSIC (China Shipbuilding Industry Corporation). This may be significant as CSIC has previously shown small submarine designs. Several were displayed at the 2017 Defense & Security exhibition in Bangkok, Thailand.

Of these, the new boat appears to be similar to both the MS-200 midget submarine and S600 coastal submarine. Our estimate is that it is closer to the latter, although likely shorter.

The design is also similar to a special submarine first seen in 2018. That submarine lacks a sail and, absent of any official name, is known as the ‘sailless’ submarine. The overall size is similar and the rudder bears a strong family likeness. Significantly that submarine was also built by CSIC, although not in Wuhan.

Increasingly Potent Small Submarines
Traditionally small submarines have been less capable, which is largely why major navies do not field them. Although cheaper to build, they compromise on performance, range and speed. Basically they have less power.

But this balance may actually be changing. New lithium-based battery technologies may offer small submarines much longer endurances. And/or higher cruising speeds. This may significantly increase their combat utility, particularly inshore where their small size is an advantage. There is circumstantial evidence that China has been researching these batteries for submarines. And possibly even fielded it, although that is unconfirmed.

Increases in battery power may also allow more powerful sonars and combat systems to be carried.

What is this Submarine? The Theories
One theory is that the submarine was built for export because the design is similar to the CSIC concepts shown abroad. Myanmar, Bangladesh and Sri Lanka might be candidates. But there have not been reports of this.

White stripes running along the top of the sail may indicate that it is for the Chinese Navy (PLAN) however. These are normally seen on submarines before they are commissioned.

If the PLAN is going to operate this new type, it represents a much larger deviation from other leading navies’ strategies. But as small submarines become more capable, they may have a valuable role for the PLAN. The South China Sea and island chains seem particularly well suited.

Smaller submarines will still be behind larger ones, which will also benefit from the new batteries. And smaller ones will have fewer weapons and less provisions. But the balance of usefulness of small submarines might be changing.