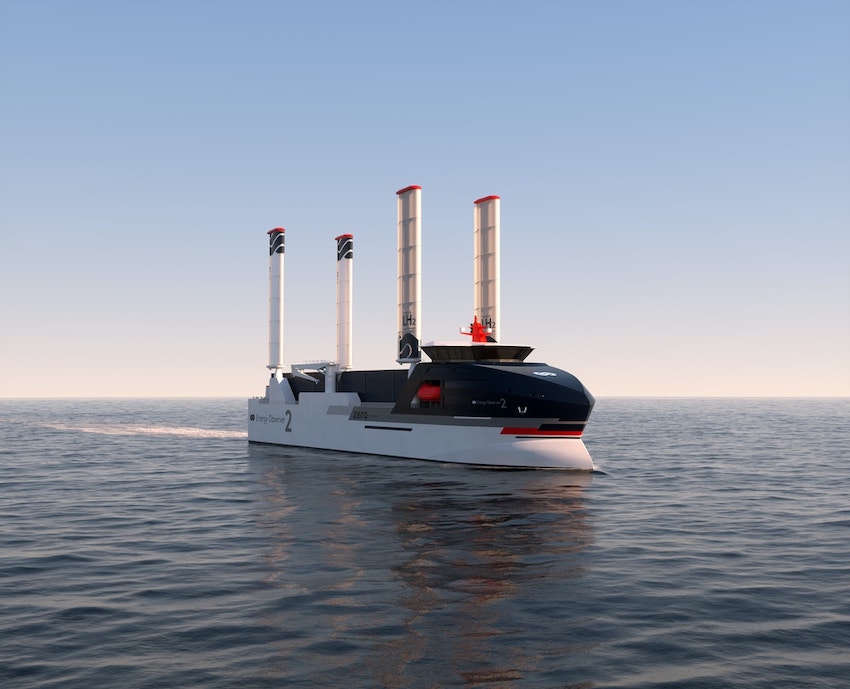 After having developed an autonomous laboratory vessel with the first complete hydrogen chain, capable of producing its own hydrogen with its surplus of renewable energies, Energy Observer is taking a new step by launching the design of the most representative ship of the maritime transport industry: a multipurpose cargo ship fuelled by liquid hydrogen, a technology that allows zero-emission navigation, while offering very high transport capacities and great autonomy.

Victorien Erussard, President and founder of Energy Observer, will present the ship on February 10th during the One Ocean Summit in Brest.

Maritime transport accounts for 3% of CO2 emissions annually on a global scale. The ambition of Energy Observer and its partners is to present prototype solutions leaning towards zero-emission for the transport of goods.The technologies are now mature, with liquid hydrogen storage well mastered, the deployment of liquefiers around the world, and the latest generations of mass-produced fuel cells.

Energy Observer is now tackling the latest technological challenges, such as the integration of large tanks or the management of cryogenic temperatures, thanks to the unfailing support of its historical and technological partners.

At the forefront, Air Liquide, the world leader in hydrogen for over 50 years for industry and space. Air Liquide masters the production, storage, distribution, and safety of liquid hydrogen and thus brings its technological expertise and its capacity for innovation.

EODev, the industrial subsidiary of Energy Observer that designed the first certified hydrogen boat, and develops accessible and marinized systems, is an expert in fuel cells' integration in demanding environments.

LMG Marin, the naval architecture firm that pioneered decarbonated propulsion and developed the world's first liquid hydrogen ferry, Hydra, is the design office in charge of this innovative project.

Ayro, the company created by Marc Van Peteghem, to propose auxiliary propulsion systems for large ships, and for which Energy Observer was the first operational testbed, will equip the ship with its Oceanwings®.

Another important partner is Bureau Veritas, a key player in the evolution of maritime regulations and innovations, which has accompanied Energy Observer since the launch of its first hydrogen-powered vessel.

Finally, the French Maritime Cluster and the T2EM Institute is working with academic, scientific, and industrial partners to create the Institute for the Eco-Energy Transition of the Maritime Sector (T2EM), whose objective is to steer and implement the national structuring program "Zero Emission Ship & Port" to achieve the goals of decarbonation, emissions reduction and respect for the biodiversity of the sector. Energy Observer 2 is the Institute's "flagship," the first full-scale demonstrator to power the entire industry.