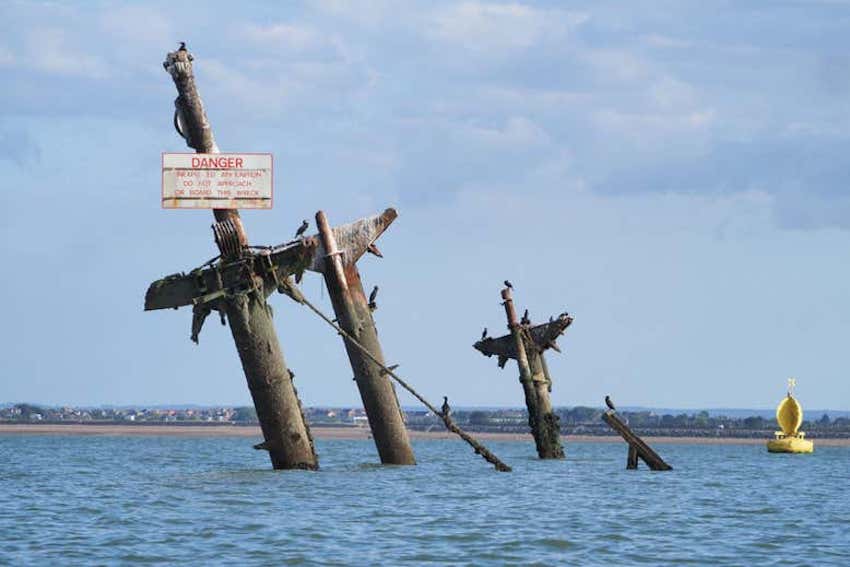 A historian says he is a “nervous wreck” about plans to cut off the masts of a sunken WW2 cargo ship laden with explosives jutting out of the River Thames.

The SS Richard Montgomery, nicknamed the £1 billion timebomb based on the amount of damage it could cause, has been embedded in the mouth of the River Thames since it sunk in August 1944.

The government has announced plans to cut back the thick steel masts in June to reduce their weight. This will prevent them collapsing into the holds, where they would fall onto the bombs and set off an explosion.

The US Liberty ship was on its way to deliver 2,000 cases of cluster fragmentation bombs, nearly 600 500lb armour-piercing bombs and at least 1,000 additional 1,000lb bombs to Cherbourg to help fight back the German forces when she ran into trouble in the Thames estuary. She dragged her anchor in the shallow water and grounded on a sandbank close to the Isle of Grain.

Extensive efforts to unload the ship of its deadly cargo began but the next day its hull cracked and the vessel began to sink. The Admiralty refused to pay workers danger money for unloading the bombs and work stopped- missing the best chance of making the wreck safe.

Sixty years later a report showed the wreck was disintegrating and the explosives were unstable. Today only the masts of the vessel - which still has 1,400 tons of explosives in the hold - are visible.

A Ministry of Defence report said an explosion “would throw a 300 metre-wide column of water and debris nearly 3,000 metres into the air and generate a wave 5 metres high”.
It is estimated a tidal wave could wipe out some coastal communities and damage nearby oil and gas facilities in Sheerness.

Tim Bell, a local historian, told The Standard he was disappointed that the Ministry of Defence was not going remove the entire ship. He said: “Most people that live on the Isle of Sheppey and Sheerness are perhaps complacent of the potential risk on their doorstep. “The main risk is a collision by a vessel, and there have been many near misses including a collision, and with no mast to identify where it is could be even more of a danger for smaller craft.

“The more research I do, the more there is to be alarmed at the situation and the problem to make it safe should have been done much sooner.
“It could have been made safe by containing the wreck without touching it. You could build a single bank around to keep the bombs in place, help stop a collision, and help limit the air blast and effects if there was a mass explosion. “Once the mast are removed there will be nothing to see apart from a few small buoys and may make it more dangerous to navigate. “I always become a nervous wreck talking about this because the wreck is only in a few fathoms of water.” He added that local fisherman had used the wreck as a dumping point whenever they accidentally caught other unexploded bombs or mines from the war which could only contribute to a bigger blast.

The works to remove the masts are expected to begin in June this year. Mr Bell wants them to be placed ashore as a monument to merchant sailors who lost their lives in the war.

David Alexander, at the Institute for Risk and Disaster Reduction at University College London, told the New Scientist that all the bombs need to be removed. “Sooner or later they have to do something,” he said. “The question is will they do it too late.”