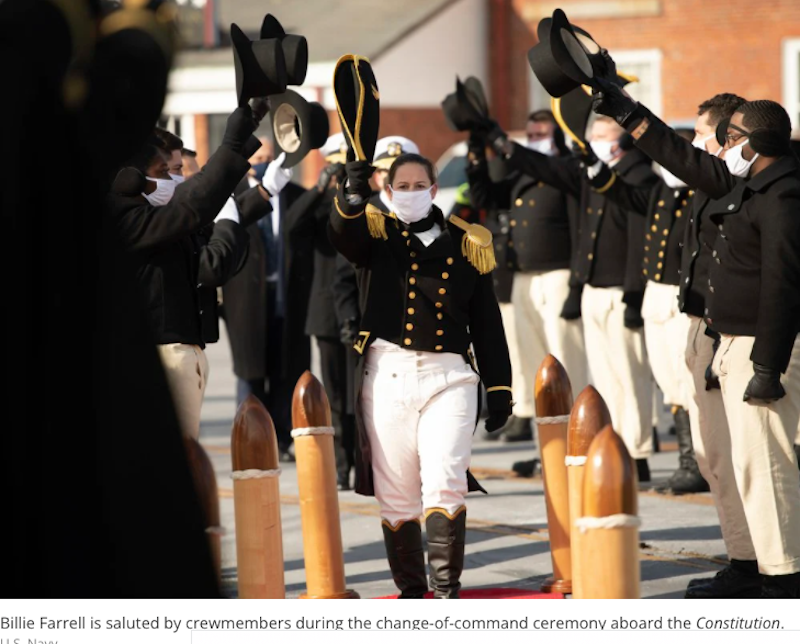 Billie Farrell is the new captain of the U.S.S. “Constitution,” a 1797 frigate that now serves as a floating museum. Farrell relieved John Benda, who’d served as the ship’s captain since February 2020.

For the first time in its 224-year history, the U.S.S. Constitution has a woman captain. Billie J. Farrell, 39, is the 77th commanding officer of the United States Navy’s oldest commissioned warship, also known as “Old Ironsides.” Her appointment took place during an official ceremony in Boston on January 21, reports Matt Yan for the Boston Globe.

“To be the commander of [the ship], and have ties to the heritage of our Navy and our country, is just an unbelievable experience,” Farrell tells Veronica Stracqualursi of CNN. “And to be the first woman to do it is also special because there are so many women serving our country right now, and so I get a chance to represent them.”

According to her Navy biography, the career officer graduated from the U.S. Naval Academy in 2004. She previously served as the executive officer aboard the Ticonderoga-class guided missile cruiser U.S.S. Vicksburg. Farrell has received numerous decorations for her service, including two Meritorious Service Medals, four Navy and Marine Corps Commendation Medals, and three Meritorious Unit Commendations.
“This is just a great opportunity ... to again tie back to that heritage of where our Navy started, to bring the modern and the historic together and bridge that and serve as a representative to share that story,” Farrell tells Rupa Shenoy of WBUR’s “Morning Edition.”

A native of Paducah, Kentucky, Farrell became interested in serving in the Navy while in sixth grade. After watching a televised Naval Academy graduation, “… I immediately told my parents that’s where I was going to go to school, immediately drawn to the traditions and the kind of the customs and everything that I saw on TV,” she says to WBUR.

Per a Navy statement, the Constitution was launched in 1797 and played a crucial role in both the Barbary Wars and the War of 1812. The three-masted wooden frigate went undefeated in battle and captured 33 enemy vessels during its decades at sea. It was retired from active service in 1881 and designated as a floating museum in 1907, wrote Dan Lamothe for the Washington Post in 2015. The vessel earned its nickname during the War of 1812, when British cannonballs bounced off the ship’s hull, which reacted as if it were made out of iron rather than wood. Oliver Wendell Homes Sr.’s 1830 poem “Old Ironsides” quickly immortalized the Constitution in popular imagination.

In videos posted on social media by the U.S.S. Constitution Museum, both Bloom and Lanam congratulated Farrell. The ship is permanently berthed at the museum in Charlestown Navy Yard, a National Historical Park in Boston.

Every year on July 4, the Constitution unfurls its sails and leaves port under its own power. The crew celebrates Independence Day by firing a 21-gun salute in Boston Harbor. Upon the sailors’ return, they turn the vessel around so it can weather evenly on both sides of its hull.
Farrell tells WBUR that she is looking forward to leading Old Ironsides’ annual cruise.

“I’m just super excited to be here and to get the opportunity to serve as the commanding officer of U.S.S. Constitution,” she says. “It’s a once in a lifetime opportunity. There’s only 76 other people in history that have had the job, and I’m just so thrilled to be here.”