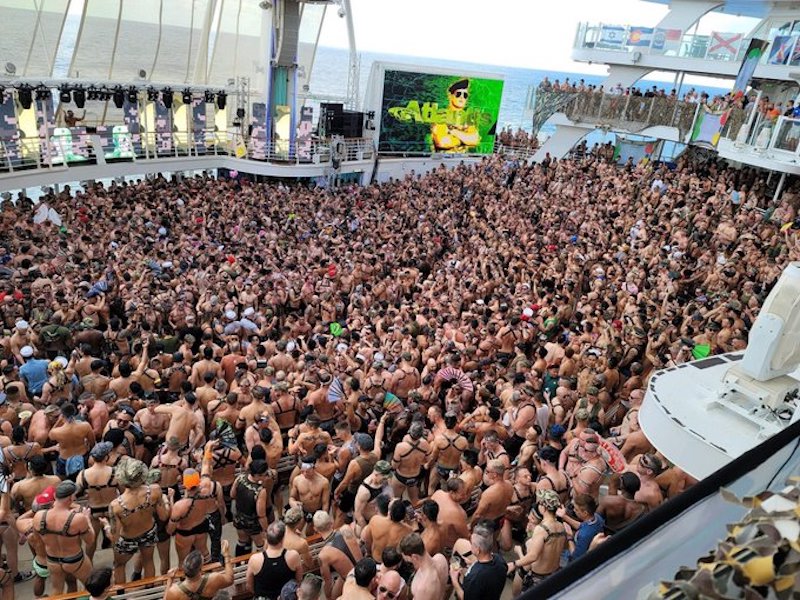 For the past several weeks, I have received emails from several people who reconsidered going on this Atlantis Events party on the Oasis of the Seas. One person commented: “They won’t let us postpone! We’re Canadian and under an advisory not to leave the country, which has implications for insurance. The CEO (Rich Campbell) does not care; many people do not want to participate anymore but will because they do not want to lose their money. It’s reckless!”

For Atlantis CEO Campbell, who we have written about several times over the years in articles where Atlantis cruise partygoers died due to drug overdoses on the high seas, its seems that he is motivated by the same thing that spurs Royal Caribbean to proceed with the cruise – money. Mr. Campbell told the New York Times (NYT) “we signed a contract with the cruise line that cannot be changed or canceled. If I told Royal Caribbean that I was canceling the cruise tomorrow, they would come back and say ‘great but you still owe us the money.’ ”

In an article in the NYT titled Can a Gay Cruise Keep 4,700 People Safe Amid Covid?, reporter Ceylan Yeginsu writes skeptically that although the Centers for Disease Control and Prevention (CDC) warned U.S. travellers to avoid travel on cruise ships, Atlantis Events “insists that its health protocols are safe enough.”
Ms. Yeginusa writes “Atlantis insists that its vaccination mandate, testing requirements and health protocols are enough to provide a safe environment for 5,500 guests throughout the cruise” and “many passengers are convinced.”

The article also quotes Ron Davis, a talent manager from Nashville, who justified ignoring the CDC’s warning against cruise travel like many people do, by claiming its somehow-safer-on-a-cruise-than-your-local-store. Mr. Davis said that the upcoming cruise “does not feel any more dangerous than taking a flight, or going for happy hour at his local bar where customers are not tested beforehand.”

Of course, there is nothing remotely similar between a local happy hour and the rave Atlantis crowded spectacle unfolding on the Oasis of the Seas. The Atlantis Events charters have always brought lots of drug overdoses on the Royal Caribbean cruise ships in the past. The truth is that this cruise line is all too happy to invite the Atlantis partiers aboard because they spend a ton of money on the cruises even if they are well known to suffer through a dozen drug overdoses and a death or so each cruise. Anyone remember Steven Krumholz or Spencer Yu or Joel Taylor?

Cramming over 5,000 on to the Oasis of the Seas during a pandemic is beyond reckless and greedy.

Royal Caribbean usually issues a statement shortly before an Atlantis Events cruise suggesting that it has a “strict zero tolerance” of drugs right before the inevitable drug bust or drug overdose which occurs like clockwork on an Atlantis Events / Royal Caribbean cruise.  So this year, the cruise line will say, with a wink and a nod, that it expects the party goers to observe the cruise line’s so-called strict mask protocols and social distancing protocols.

The Royal Caribbean / Atlantis Events Cruise Vacation Guide – 30th Anniversary Caribbean Cruise brochure contains the mask and social distancing requirements and states that:
“Important Health Notice –Please Read!
If you should come down with a contagious disease, or even suspect a contagious disease, it’s compulsory that you report it to the ship’s infirmary for the safety of everyone on board. Particularly given the current COVID pandemic, it is especially important that you comply with this regulation for the safety of everyone onboard.”

But the truth of the matter, as the photos clearly demonstrate, is that the wearing of a mask and social distancing are about the last things anyone is thinking of on this cruise.