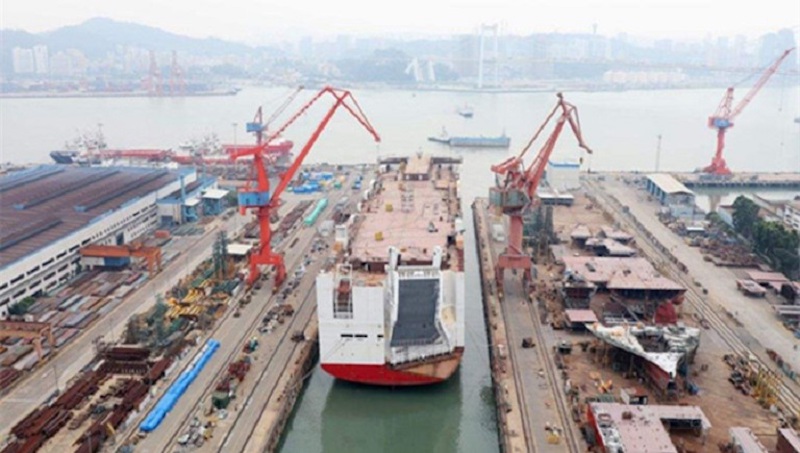 China started the construction of the world's largest and most advanced green roll-on/roll-off (ro-ro) ship in Yangzhou, East China's Jiangsu Province, marking the country's design and manufacturing level of mega ro-ro vessels has reached a new level, according to media reports.

The ship is 238 meters long and 34 meters wide, with a design draft of 7.2 meters, a speed of 20.8 knots (38.52 kilometers per hour), and a deadweight of 17,000 tons, science media stdaily.com reported on Monday, citing sources from the Yangzhou Science and Technology Bureau.

The ro-ro ship is equipped with a 7-level vehicle deck with a lane length of 7,800 meters, which is 1,100 meters longer than the current largest ro-ro ship lane in the world, and can carry 535 heavy-duty trailers and all kinds of trucks and minibuses, with a maximum load tonnage of 90 tons per vehicle.

The ship is jointly designed by Jinling Shipyard and Marine Equipment and Technology Institute of Jiangsu University of Science and Technology.

The report from stdaily.com noted that the team has achieved a major breakthrough in the design technology for the world's largest ro-ro ship, successfully mastering a series of other technologies. The team has applied for 16 patents, of which, two invention patents have been granted.

The construction of the ship also marks the first time for the 82 kW solar photovoltaic system being put in operation in China, which will effectively save energy and adopt a number of energy-saving and environmental protection measures to meet the demand of continuous development of ro-ro vessels. The first six vessels can generate over $400 million in foreign exchange after delivery.

Analysts stressed that the production of ro-ro ships in China still faces obstacles with lack of supporting industries and high reliance on foreign suppliers, noting the construction of the current ro-ro ship will further promote the development of domestic shipbuilding industry to a higher and more environmentally friendly level.