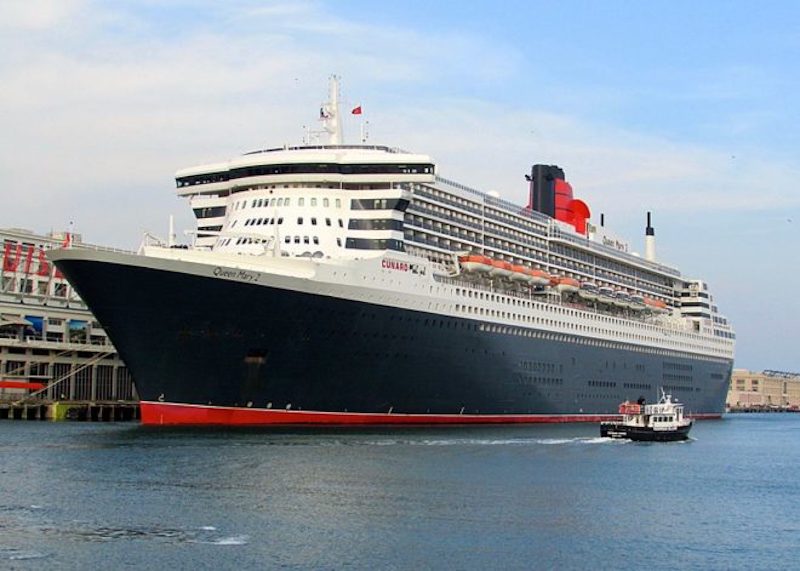 The Queen Mary 2 arrived in the New York area (at Cunard’s Red Hook pier in Brooklyn) yesterday for the first time in nearly two years. Unfortunately, the ocean liner also brought with it guests who tested positive for COVID-19.  The cruise line released a press statement stating that ten COVID-19 positive guests were disembarked upon the ship’s arrival in New York.

The Express newspaper in the U.K. characterized the stop as involving “up to 1,000 passengers are in isolation” and are “stranded” in the city after a COVID-19 outbreak during their cruise from Southampton to New York. At least one Twitter user characterized the stop differently stating “Not stranded – QM2 is on a planned three day turnaround.”

But other media sources report that guests on the Cunard ship must isolate in New York City. A local NBC station in New York reports that:
• “It’s not clear how often testing is performed on the ship, or whether the requisite pre-embarkation testing is a three-day window or more immediate. It also wasn’t known which strain of COVID the travelers had or if rapid tests were used.
• Data indicates the new omicron variant replicates so rapidly in airways — up to 70 times faster than the delta variant– that it’s possible a person’s COVID status could change more quickly than with other strains. Experts say if rapid tests are being used, it’s advised that they be administered as close to travel time as possible.
• Omicron now is the dominant variant in the U.S., federal health officials said Monday, accounting for about three-quarters of new infections last week. It is expected to become the world’s most pervasive strain as well.

The NBC-New York stations published an article titled: Vaccinated Guests on Luxury Cruise to Caribbean Test Positive, Must Isolate in NYC The article states: “Omicron is now the dominant COVID variant in the U.S., accounting for about three-quarters of new infections last week . . . ”

The cruise line’s press release refers to the alleged “length and complexity of the onward itinerary, which includes a number of Caribbean ports of call and countries.” But the itinerary is actually quite straight-forward. The cruise liner is scheduled to call on the British Vigin Islands on December 26th. It will then sail on to four additional Caribbean  ports – St. Kitts, Barbados, Dominica and St. Maartan – before it arrives back in New York on January 3, 2022. It will then cross across the Atlantic and arrive back in Southampton on January 10th.

Cunards’s press release mentions that upon an unspecified period of isolation and upon a negative COVID-19 test, departing guests may be picked up in New York before the ship begins its journey back to the U.K.

Neither Cunard nor parent Carnival Corporation are stating who will be responsible for the meals and lodging in New York or for additional transportation costs in the event that passengers wish to avoid returnimg to the ship and pefer to fly home to England.  The Express newspaper states that “yesterday, rumours were rife they (passengers) were going to disembark and stay at the Holiday Inn in Brooklyn, where they will isolate for 10 days, allegedly at their own expense.”

The Express also stated that last week around 60 COVID-19 positive passsengers were confined to their cabins on one isolation corridor. “Another isolation corridor is said to be almost full, say passengers who have paid thousands of pounds for the once in a lifetime trip. They fear the cruise chiefs may force them off so the isolation cabins are empty in case more test positive …”

If history is any guide, it is likely that there are more than just ten guests on the ship who have been infected and will likely infect others.

This outbreak comes just a couple of days after around fifty guests tested positive for COVID-19 on the Symphony of the Seas. You can read more about that COVID-19 outbreak in COVID-19 Cases Increase on Cruise Ships As Lines Suppress Information. Many guests were offloaded from the Symphony and sent to a local Holiday Inn here in Miami where some passengers complained that they were placed in a large conference room without food or water.

Acording to the Wall Street Journal today, Royal Caribbean has no plans to cancel any coming cruises. Carnival, too, seems determined to press on with its re-entry efforts” and “plans to have 57 ships in service by the end of this month.”  Meanwhile, the Journal continues, the Centers for Disease Control and Prevention’s website shows forty cruise ships operating or planning to operate in U.S. waters that have reported cases of Covid-19. Carnival, Norwegian and Royal Caribbean all operate ships on that list, though far more of Royal Caribbean’s ships appear on it than its competitors’, with 19 total ships having reported COVID-19 cases so far.

It is currently unknown but highly likly that the Omicron varriant is involved in this particular outbreak. The CDC is reporting today that over 70% of new COVID-19 cases involved this highly transmittable virus which is expected to sweep across the U.S. and around the world. Retiring Director of the National Institute of Health, Francis Collins, said on Sunday the U.S. could see daily cases nearing 1 million people without adequate mitigation strategies.

Becoming infected during a leisure cruise to Caribbean islands many thousands of miles away from your home seems about the last way that I would risk taking a family vacation.