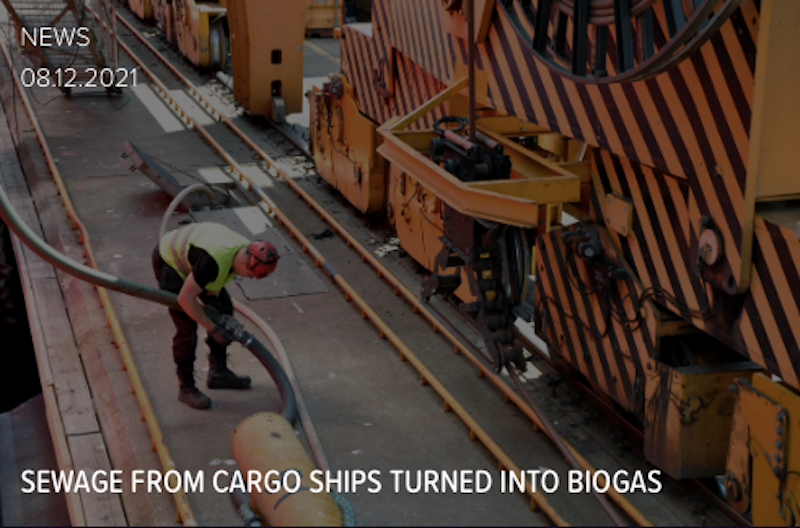 In order to prevent discharge of sewage into the Baltic Sea, the group promotes the circular model of turning sewage into biogas that will be used as fuel by heavy traffic.

The Ship/t Waste Action cooperation aims to develop waste value chains between different parties, starting at the biggest port in Finland, HaminaKotka, as the first location. The wastewater sludge created in the sewage discharge process by cargo ships at the port of HaminaKotka is refined into renewable energy at Finnish energy company Gasum’s biogas plants.

Kymen Vesi, which treats the cargo ships sewage discharge, also takes samples of the wastewaters and generates research data on, for example, nutrient content which contributes to eutrophication and oxygen depletion in the Baltic Sea.

“We can achieve our objective of a cleaner Baltic Sea, one ship, one port and one country at a time. The nutrient load on the sea decreases every time wastewater is discharged at the port. We need extensive cooperation to succeed in our mission”, said Elisa Mikkolainen, project director at BSAG.

Parties of the circular cooperation also include shipping companies from Finland and abroad such as Essberger & Stolt Tankers, Utkilen and Maersk.

“The port of HaminaKotka is the largest general port in Finland, visited by approximately 2,500 cargo ships every year. We want to encourage the ships to discharge their wastewater at the port. Our sewage reception and treatment facilities meet the requirements of the circular economy”, said Suvi-Tuuli Lappalainen, development manager at the Port of HaminaKotka.

Passenger ships, such as the ferries between Finland, Sweden and Estonia, have been voluntarily discharging their wastewaters at the port for years, BSAG explains.

Since 2021, the IMO regulations prohibit discharges of untreated sewage from passenger ships in the Baltic Sea. However, there is no similar regulation for cargo ships which can legally discharge greywater, sewage and ground food waste into the Baltic Sea.

“All discharge into the sea is unnecessary. This is why waste from ships should be discharged at the port and recovered. These new voluntary measures will lead the way for responsible operators both on land and at sea”, BSAG concludes.