Passenger Overboard From the Carnival Miracle 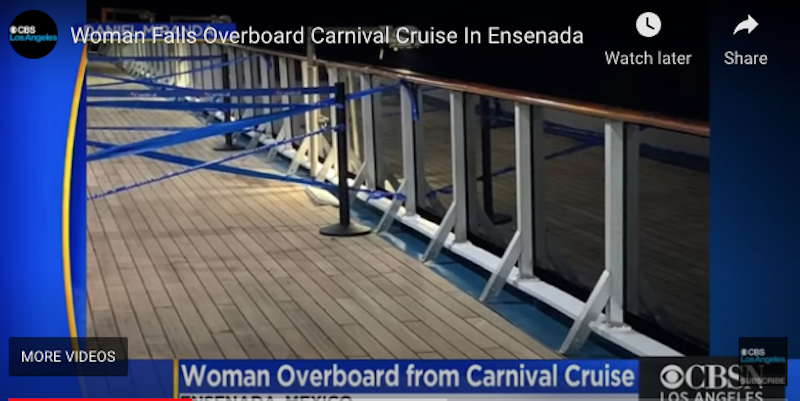 Multiple news sources yesterday reported that a young woman in her 20’s went overboard from a Carnival Cruise Line ship and into the Pacific Ocean early Saturday morning.

The Carnival Miracle was sailing around 35 miles west of the coast of Ensenada, Mexico, when the passenger went over the rails shortly after 3 a.m. The incident was captured on security footage, the U.S. Coast Guard said.

The Carnival cruise ship came to a near complete stop around 3:30 a.m. as crew members dropped a lifeboat into the water, according to a passenger’s account on a NBC news station.

The cruise ship subsequently searched in the water

Some news acounts state that the woman went over the rails of her stateroom, although the video below, via a local CBS station, suggests that the passenger went overboard from from an open deck of the ship.

Accrding to Newsweek, a firefighter paramedic onboard the cruise ship, told CBS Los Angeles: “Someone has lost their life, whether it was done by accident or by foul play I don’t know – there’s some high suspicion of foul play.”

The U.S. Coast Guard dispatched a cutter and a helicopter to the area to search for the woman. The search was unsuccessful.

The incident raises an ongoing issue with cruise ships which are required by the 2010 Cruise Vessel Secuity and safety Act to install automatic man over-board sytems. Technology has long existed for ships to detect whenever someone goes over the rails of the ship and into the water.

If installed, sophistcated infrared monitors and radar sustems can automatically signal the bridge, capture the image and track the person, even at night, in the water. Such systems assist in the immediate detection of overboards and tracking them in the water at night; otherwise, searching for a person in the water is akin to looking for a needle in a haystack.

Well over 300 people have gone overboard from cruise ships in the last twenty years, according to cruise expert Dr. Ross Klein which has tracked cruise ship overboard for many years. Most cruise lines, with the exception of Disney Cruises, refuse to install the life-saving technology.

In this particular case, it appears that there was not the usual delay in deteching the overboard passenger’s disappearance from the ship which was confirmed by what the U.S. Coast Guard described as a “security camera.” Although most Carnival cruise ships do not have man=overboard systems installed, it is unknown whether the Carnival Miracle has such systems on the ship.